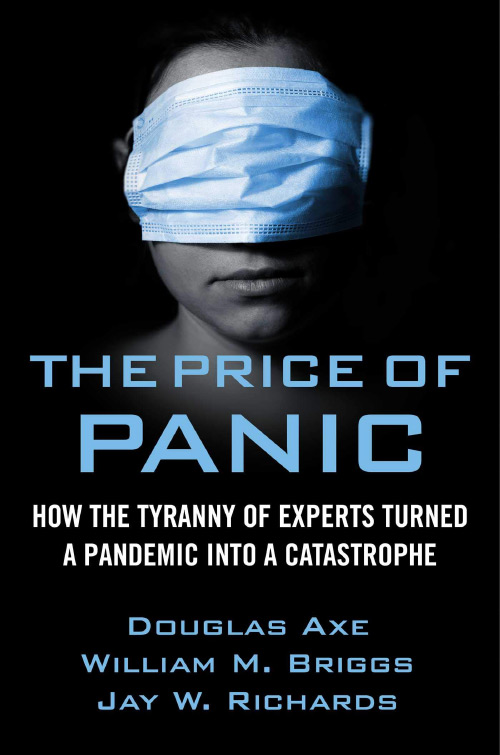 The Price of Panic
How the Tyranny of Experts Turned a Pandemic into a Catastrophe
By Douglas Axe, William M. Briggs, and Jay W. Richards
Kindle Hardcover Audiobook Audio CD
This book review is a web exclusive for the Summer 2021 issue of The Independent Review.

The Price of Panic, as described by the authors, was a book hurried to publication so that it would be one of the first books to discuss the global panic stemming from the COVID-19 pandemic of 2020 (p. 1). The first-mover status of the book does not mean it is sloppy. The book is detailed and mostly careful in its analysis despite the short timeline. However, problems arise in their analysis.

The Price of Panic explores the role of various experts during the pandemic. The three authors represent a wide range of expertise: Douglas Axe brings in knowledge of molecular biology. Jay Richards is a professor in the business school at Catholic University. William Briggs is, according to his blog, the statistician to the stars. Combining their respective areas of expertise, we see a picture of the pandemic emerge that focuses on the biological nature of the virus (chapter 1), the statistical nature of the models ( chapters 6-7), and the economic toll of the panic ( chapter 10). Thus, this book falls squarely in the emerging literature of expert failure. As defined by Roger Koppl (Expert Failure. Cambridge: Cambridge University Press, 2018), expert failure is when outcomes deviate from the normative expectations of the expert’s advice. This book explores the various failures of the experts and discusses why the experts should have known better.

The goal of Axe, Briggs, and Richards’s analysis is threefold: First, explain the viral (double entendre intended) panic (p. xiii). Second, prevent the panic from happening again (p. 1). Third, defend the “normal normal” against the “new normal” of a post-pandemic world (p. 201). In the first of these goals, they succeed. The second is a partial success. In the third, and perhaps the most important from the authors’ perspective, the authors fail.

In their goal of explaining the pandemic panic, the authors succeed. There are several failures they identify, all stemming from elitism: “‘[H]igh-profile’ people think it’s their birthright to impose their wisdom on the masses. Trust us—we’re gods” (p. 180). They point to numerous cases where the wisdom of experts, when questioned (even by other experts), led to denouncements (p. 180), and accusations of psychopathy (p. 173) or simple ignorance (p. 170). Consequently, this elitism led to several failures on the part of experts, forecasters, journalists, and social media actors.

Much of the book is dedicated to various instances of expert failure. For example, one of the issues the authors raise is how rapidly changing testing requirements led to an increase in the number of “new cases” and how those increasing figures were misunderstood to indicate increased real cases (p. 114–115).

The authors also discuss in-depth modeling failure. Modeling failure is a facet of expert failure. However, the authors dedicate several chapters of the book (chapters 6, 7, and 9) to modeling failure, and it does deserve special attention. For perhaps the first time in history, forecast modeling was front-and-center in people’s minds. The authors bridge the gap between popular conceptions of modeling and what models are.

Chapters 6, 7, and 9 dig into the minutiae and issues with the statistical modeling used and reported. Chapter 6 is dedicated to explaining many of the terms and numbers used by forecasters and scientists reporting issues. For example, the authors discuss the difference between a suspected case of COVID and a probable case: A patient with a cough and a fever was a suspected case if the attending physician thought it was appropriate. However, if the patient was tested and the test returned inconclusive, the probability of infection was upgraded to probable (p. 54). To the authors, the increase in the probability of infection from suspected to probable based on inconclusive evidence represents a failure of experts as it represented lax testing standards (p. 54).

Chapter 7 delves into issues with models in general and the Imperial College London (ICL) and Institute for Health Metrics and Evaluation (IHME) at the University of Washington models specifically. The issues infecting these models include the inability to account for current conditions (p. 79), failure of public health experts such as Dr. Anthony Fauci to understand the models (p. 84), and computer code that is buggy, difficult to parse, provides ranges so wide as to be unusable and unreliable in the sense that the code run on the same data produces different results (pp. 85–89). Consequently, journalists and experts picked up on these models and created an unjustifiable atmosphere of panic.

Finally, chapter 9 deals with the results of lockdowns. Did they work? At the time of their writing (May/June 2020), the evidence was mixed but tended to indicate that lockdowns did not stop the spread. That message continues as I write this review (March 2021). Lockdowns do not seem to have had any discernable effect on spread. In their analysis, the authors note the public health experts ignored their advice on lockdowns: “Lockdowns, [the WHO] said, can even spread disease ... ‘Workplace closure,’ they cautioned, ‘should be a last step that is only considered in extraordinarily severe epidemics and pandemics’” (p. 104).

These expert failures were amplified by social media, where anyone could share or repeat panicked information, which in turn was amplified (p. 34) and dissent squashed (p. 37). Journalists also “obsessed” over cases, numbers, and expert testimony, providing little to any countervailing calm to the panic (chapter 3). All these issues ended up feeding into the panic pandemic.

The book is only a partial success in its goal of preventing future expert panics. Where it succeeds it goes beyond merely listing various failures and also provides an analysis of why the experts failed and how to prevent it in the future. One of the issues the authors stress is that public health experts are experts in public health, not in everything: “They’re bound to maximize safety, to the neglect of other goods....This is why putting medical specialists in charge of nations...is asking for overly cautious and even oppressive policies” (pp. 155-156). Medical experts act on incentives and training, and their training encourages them to be highly blame adverse. As such, the problem is not expertise per se, but “when [experts’] narrow, professionally biased thinking dictates policy for everyone” (p. 157). Experts provide valuable services but cannot possess all the knowledge needed to direct all activity.

The authors also repeat throughout the book the need for experts to be precise. Competition among experts provides that impetus. To borrow a phrase from Roger Koppl and E. James Cowan (“A Battle of Forensic Experts is Not a Race to the Bottom,” Review of Political Economy 22 [April 2010]: 235–262), “competition turns wizards into teachers.” This message of necessary competition, and questioning, among experts to promote quality is repeated four times (pp. xix, 79, 87, 187).

However, the book falls victim to some errors. For example, in chapter 13, the authors list several countries who “got it right”: Taiwan, Sweden, Japan, and South Korea. These countries resisted global panic, lockdowns, and the more extreme measures of stay-at-home orders. They relied primarily on voluntary behavior. They seemed to have beat the virus. However, the examination of why the countries succeeded is wanting. The authors mainly list policies (or lack thereof) and point to that being successful. Counterexamples of Australia, New Zealand, and China, which had severe lockdowns and low case/death numbers are not mentioned. Further, causal mechanisms are generally handwaved; no real explanation is given. As such, the reader is left wondering why these countries succeeded.

In their analysis of the human costs (chapter 10), there are theoretical problems. The authors make the same mistake they accuse public health experts of making: not understanding how people behave. For example, they state, “After all, the coronavirus didn’t shut down businesses. Governments did” (p. 130). As Austan Goolsbee and Chad Syverson document (“Fear, Lockdown, and Diversion: Comparing Drivers of Pandemic Economic Decline 2020,” Journal of Public Economics 193 [January 2021]), people were pulling back economic activity before lockdown orders were issued. Disentangling the effects of the lockdowns from voluntary activity is a complex problem, one which the authors do not address, attributing the decline to the lockdowns. Consequently, they almost certainly overestimate the impact of lockdowns on economic activity.

Additionally, the book has a problem of declaring victory too soon. For example, the authors declare the pandemic is approaching an end in June (p. 63). With death counts now north of 500,000, their prediction of 100,000 deaths seems foolish. Furthermore, Sweden did eventually lockdown. The authors’ analysis of the trends surrounding the pandemic does not hinge on these predictions. A careful reader ought to discount the predictions and focus on the book's main contribution: an analysis of expert panic.

Frederic Bastiat wrote in Economic Sophisms (Indianapolis: Liberty Fund, 2016, p. 93), “[T]he worse thing for a good cause is not to be competently attacked but to be badly defended.” Unfortunately, the goal of “defending the normal normal” is poorly done in this book. Throughout, the authors have a problem with ad hominems. For example, in critiquing a computer model of social distancing and its benefits (p. 93), the authors end the section: “Then, in 2020, the government finally got to play the game with live ammo. All because a high school kid had told a computer what to say.” The previous discussion was how the computer model, which a teen developed, was not based on evidence but simulation. The quip about her being a teen comes off as sneering. The sneering attitude pops up from time to time in the book but is especially prevalent in chapter 7. As such, the book will primarily be of interest to those who already agree with the message. Many critics, and even some sympathetic readers, will be put off by the tone.

While there are issues with the book, The Price of Panic remains a crucial first work on the COVID-19 pandemic. Interestingly, its principal value may end up being a historical document: a repository of expert messages early in the pandemic. If an updated edition of this book were to come out, it would be interesting to see how the expert messaging changed over the year.