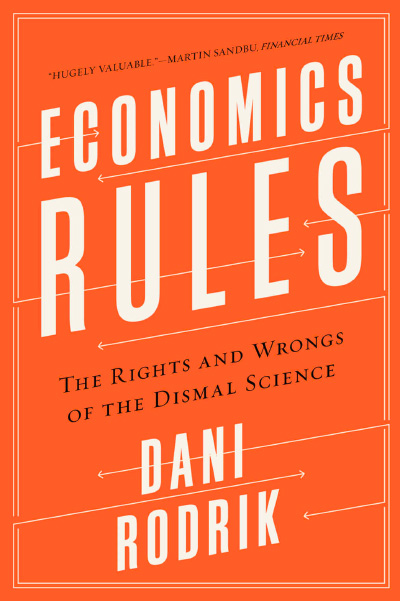 Economics Rules
The Rights and Wrongs of the Dismal Science
By Dani Rodrik
Kindle Hardcover Paperback Audiobook MP3 CD
This book review is a web exclusive for the Summer 2017 issue of The Independent Review.

In the last issue of The Independent Review, I reviewed Robert Mitchell’s The Language of Economics (London: Palgrave Macmillan, 2016), an outsider’s critical examination of how economists go about their business, which argues that economists are “slaves” to their language and which accuses economists of constructing imaginary “Alice-in-Wonderland” worlds (i.e. models) that have little relation to how actual economies work. My review was very critical rejecting the book’s main arguments and hoping for a book more like Dani Rodrik’s Economics Rules.

Rodrik, an economist in the Kennedy School of Government at Harvard University, argues that models are “both economics’ strength and its Achilles’ heel” (p. 5). He urges economists to select their models carefully and “learn how to shift among different models more fluidly” and makes the salutary warning that problems will arise whenever economists “mistake a model for the model, relevant and applicable under all conditions” (p. 6, emphasis in the original). Economic models are a necessity because “We can understand the world only by simplifying it” (p. 44) and realism in models is important only for the models’ critical assumptions. He is, rightly in my opinion, dismissive of large-scale economic models, which are “singularly unproductive” (p. 39) and often lead people astray. Rodrik, argues that “society does not have fundamental laws—at least not in the same way that nature does,” because “humans have agency.” Economic science progresses “one model at a time” (p. 63). It progresses “’horizontally’ (by multiplying models) rather than ‘vertically’ (by newer models replacing older ones)” (p. 64). Little of economics is strictly testable, but it does make progress. He argues that economists need to think more like auto mechanics in diagnosing problems to isolate the critical issue that has caused a particular economic malfunction and that economists should set themselves the modest goal of “searching for understanding one cause at a time” (p. 145).

All of this seems very sensible. The economic world we seek to understand is hopelessly complicated, so we cannot hope to explain it all. Attempting to do so invites embarrassing failure. But then Rodrik appears to go overboard. He critiques economists who offer clear answers to the simple questions that the public and policy makers ask of them. Surveys have found overwhelming agreement among economists to propositions such as “A ceiling on rents reduces the quantity and quality of housing available” (93% agree); “Tariffs and import quotas usually reduce general economic welfare” (again, 93%); “The United States should eliminate agricultural subsidies” (85%); and “A minimum wage increases unemployment among young and unskilled workers” (79%) (pp. 150-51, quoting Greg Mankiw). Rodrik avers that although “all the valuable lessons that [economics] teaches are contextual” (p. 148), “virtually all the economists surveyed ... are apparently willing to vouch for the general validity of a particular set of critical assumptions. Perhaps they stick their necks out because they believe those assumptions are more common in the real world. Or they think one set of models works better ‘on average’ than any other. Even so, as scientists, should they not adorn their endorsements with the appropriate caveats? Shouldn’t they worry that such categorical statements have the potential to mislead?” (p. 150). He decries this consensus mongering: “when it comes to the issues of the day” economists’ “views often converge in ways that cannot be justified by the strength of the available evidence” (p. 151).

In the cases listed above, Rodrik accuses economists of mistaking their model for the model, but I don’t think they are doing anything of the sort. Yes, a minimum wage increase might not increase unemployment among young and unskilled workers if employers have monopsony power. But, in making these statements economists are saying that the monopsony model is completely inappropriate for examining the labor markets that policy makers have in mind because they are very competitive. It’s the addition of caveats that will mislead the public, not the assumption of competitiveness. And there’s the rub—Rodrik has his favorite models and they tend to downplay the powerful forces of competition. Later in this chapter, which is titled “When Economists Go Wrong,” he tackles the housing market crash and recession of 2008. As he warns of “errors of omission” by economists, he essentially omits mention of the role that the government and its insurance guarantees played in the housing bubble. He seems oblivious of the downside of insurance guarantees and doesn’t even mention the term “moral hazard.” Instead, he asserts that “the need for deposit insurance (coupled with regulation) to prevent bank runs [is] featured in all finance textbooks” (p. 155). This clearly undercuts his earlier warnings about oversimplification. Is there really a “need” for deposit insurance to prevent bank runs? My reading is that the jury is definitely still out on this one—and that there’s a lot of evidence on the contrary side, such as can be found in Thomas Hogan and Kristine Johnson’s “Alternatives to the Federal Deposit Insurance Corporation” (The Independent Review, Winter 2016, 20, no. 3: 433-54).

Later he asserts that “economists tend to err on the side of markets” (p. 169), even though his statement about what textbooks say concerning deposit insurance belies this. But suppose he’s correct. Perhaps erring on the side of markets occurs because the political system and most of academia err so strongly in the other direction? The anti-market tilt in academia is comical at times. At a recent faculty meeting the audience was told by a political scientist that increasing the minimum wage on campus to $15 per hour was a “free lunch,” that there would be no downsides. I stood up to mention warnings by Alan Krueger that boosting wages that high “would put us in uncharted waters, and risk undesirable and unintended consequences” (“The Minimum Wage: How High Is Too High?, New York Times, October 9, 2015). (Kruger, of course, is famous for arguing that modestly raising the minimum wage doesn’t reduce employment.) I warned that such a pay increase would likely lead to a reduction in employment among low-wage workers on campus, would divert university funds from other good causes, and would probably increase prices on campus (the proposal would have covered food sector workers). No one paid any attention, except when I was later told that making this argument demonstrates that members of my department teach that “libertarian economics is the only way to go.” Alan Krueger might be amused that his arguments are considered libertarian.

Rodrik closes with twenty commandments—ten for economists and ten for noneconomists. They are generally worth following and include “It’s OK to say ‘I don’t know’ when asked about the economy or policy” and “Economics is a collection of models; cherish their diversity” (pp. 213-14). (Not all economic models are worthy of being held dear, however. I noticed that Rodrik ignores Austrian economic models, for example.) I would have reworded some. Perhaps “Substituting your values for the public’s is an abuse of your expertise” (p. 214) would be better as “Hiding your values is unfair.” After all, is it possible for anyone, even an economist, to substitute his values and take on someone else’s?

These caveats aside, there is much sensible thinking in Economics Rules.