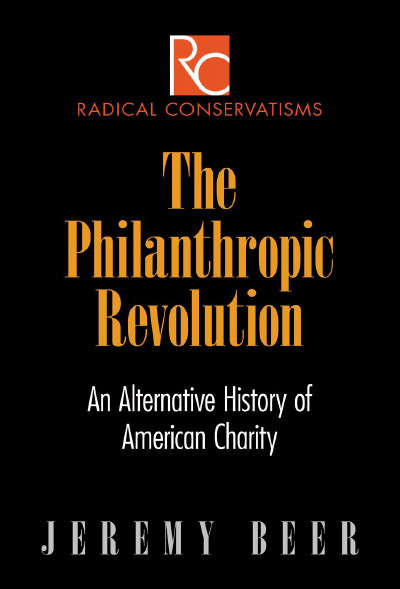 The Philanthropic Revolution
An Alternative History of American Charity
By Jeremy Beer
Kindle Hardcover
This book review appeared in the Spring 2016 issue of The Independent Review.

Robert Higgs and Elizabeth Bernard Higgs reminded Independent Review readers in a recent “Etceteras” column that “[a] ship cannot make much headway when it is held back by a sea anchor. In our voyage toward a truly free society, lack of compassion for the less fortunate acts as such an anchor” (“Compassion—a Critical Factor for Attaining and Maintaining a Free Society,” The Independent Review 19, no. 4 [Spring 2015]: 627).

In The Theory of Moral Sentiments, Adam Smith argues that compassion—from the Latin compati, “to suffer with”—is innate: “By the imagination we place ourselves in . . . [the] situation [of someone in need], we conceive ourselves enduring all the same torments, we enter, as it were into his body, and become in some measure the same person with him, and thence form some idea of his sensations, and even feel something which, though weaker in degree, is not altogether unlike them” (part I, sec. I, chap. 1, at http://oll.libertyfund.org/titles/2620). If so, the question becomes how to express our compassion.

In recent decades, the American voter has expressed this compassion largely by taxing the rich and redistributing resources directly to the not-as-rich through programs such as Temporary Aid to Needy Families, the Earned Income Tax Credit, Medicare, and school lunch programs. Unfortunately, these programs have mixed motives—some not so altruistic—and mixed results. Another expression of compassion is the mammoth philanthropic movement, capped by more than eighty thousand foundations with $715 billion in assets. Such foundations, headlined by the Bill and Melinda Gates Foundation, whose net worth exceeds $42 billion, are often touted by skeptics of big government as an antidote to it. And in some ways they are. But, argues Jeremy Beer, president of the American Ideas Institute, in many ways they provide yet another attempt to solve the world’s problems from the top down.

As Beer sees traditional historiographies of philanthropy in America, they fall into one of three camps—a celebratory story of “unadulterated progress and unquestionable goodwill”; a leftist critique of “systems of social control intended to maintain class boundaries and serve middle-class and elite interests”; and a story about reformers “leading, happily, to the advancement of the American welfare state...paving the way toward a necessary safety net, even if they often betrayed class biases and had less than pure motives” (pp. 10–11). To these three kinds of history, Beer adds a fourth “counterhistory” that cannot be ignored—a history of secular “philanthropy’s” marginalization of traditional, theologically grounded charity. He carefully draws a picture of an increasingly powerful philanthropic establishment frustrated by traditional charity, which it often ridicules as “irrational, wasteful, parochial and politically backward” (p. 6). Although the modern philanthropic movement has done much good, Beer demonstrates that its critique of charity betrays serious problems and often misses the point.

At root, modern philanthropy suffers from the same knowledge problem Austrian economists see in centrally planned economies. One of the most telling epigraphs in the volume comes from Andrew Carnegie, who gave away nearly$350 million (around $8 billion at today’s prices) for projects that included the construction of nearly three thousand libraries and pensions for steelworkers and teachers. Carnegie asserted that “one of the serious obstacles to the improvement of our race is indiscriminate charity. It were better for mankind that the millions of the rich were thrown into the sea than so spent as to encourage the slothful, the drunken, and the unworthy. Of every thousand dollars spent in so-called charity today, it is probable that nine hundred and fifty dollars is unwisely spent—so spent, indeed, as to produce the very evils which it hopes to mitigate or cure” (p. 1). I recall reading this statement years ago and nodding in agreement. After all, Carnegie was a genius at making money. Doesn’t that make him a genius at spending it to improve humankind? He did build almost three thousand libraries, surely a worthy cause. However, this view is wishfully naive. How did Carnegie know that 95 percent of “so-called charity” was being misspent? How did he really know that his own money was being spent more wisely? He didn’t. To know how to be wisely charitable, you have to know a great deal about the recipient of the charity. And Carnegie didn’t. This is one of Beer’s core arguments, which unfolds as he examines the history of the philanthropic revolution—of philanthropy versus charity—aptly citing witnesses who understood why charity means much more than “scientifically” giving money away to worthy causes.

Below the thin, rarefied air of philanthropic professionals, many Americans have breathed and still breathe the Judeo-Christian ideal that the purpose of charity isn’t merely to solve problems of scarcity; rather, it is to give “testimony” of God’s love and so to “unlock the secret of the universe”—transferring wealth “from this world to the next” and thus “placing treasure in heaven” (p. 17). This traditional view of charity prevailed at the country’s founding, but Beer shows that it came under attack beginning with the Second Great Awakening around 1830, which spread the idea that humankind could be perfected on earth. This idea of perfection clashed with traditional charities, which rarely tried to stigmatize and reform recipients. Traditional charity didn’t make careful delineations between the deserving and undeserving poor. It was too lenient; it sought to aid the poor, not to change them. Unfortunately, the new noble, philanthropic goal of eliminating poverty at its root led to some high-handed practices (often sharpened by a revulsion toward poor Irish Catholic immigrants)—including programs that effectively kidnapped children from poor families to place them into “wholesome” homes where they could be reeducated.

With the Civil War, the progressive movement, and the rise of the New Deal state, the attack on the inadequacies of traditional charity intensified, but the latter’s supporters kept pushing back, showing that philanthropy was missing the mark by ignoring the spiritual. True charity isn’t a one-way giving from the benign but remote (and often condescending) elite to those they deem needy; it is a mutual exchange between people with equal dignity. The benefactor gives financial aid but also a genuine smile, time, understanding, a piece of him- or herself, which is to his or her eternal credit. This is true compassion. The recipients pay back as they share themselves with benefactors and pray for them. This personalist approach is at the core of traditional Judeo-Christian teaching. Jane Addams, founder of Hull House in Chicago, put this distinction most succinctly when she spotted the problem with a wealthy philanthropist: “He tried to be ‘good to them’ but not ‘with them’ she noted” (p. 87). The poor and broken aren’t a theoretical problem; they are human beings. One incisive though anonymous homilist wrote that the poor “are with us, and their present wants clamor for our help. Shall we say that they are improvident, thriftless, intemperate? Then more loudly do their needs cry to us. We are not asked to encourage their vices, but to relieve their necessities” (qtd. on p. 65). Dorothy Day went one step further, seeing charitable acts and giving, as Beer puts it, “as a way for the giver to enter into poverty, to share it with the suffering, to bring more love into the world.” Just as God in the person of Christ entered into human poverty and shared its suffering. “When we succeed in persuading our readers to take the homeless into their homes,” Day clarified, “then we will be known as Christians because of the way we love one another” (p. 92). Blessed are the poor in spirit; theirs is the kingdom of God.

In contrast, cut off from their spiritual roots, philanthropists during this era increasingly embraced an alternative to eradicate poverty—eugenics and the forced sterilization of those unfit to pass along their genes. (Today some have descended one step deeper by justifying abortion as a means of ending poverty.)

Beer closes The Philanthropic Revolution with thoughts about how to revive the personalist, localist tradition of charity in our society. Quoting Gary Anderson on the Book of Sirach earlier in the book, he reminds us that “having money is tantamount to a spiritual ordeal whose outcome is determined by whether one has the courage to give it away” as well as the compassion to give oneself away at the same time (The Place of the Poor in the Biblical Tradition [New Haven, Conn.: Yale University Press, 2013], p. 59, qtd. on p. 23). Beer’s point is not a wholesale condemnation of modern philanthropy—which has achieved many good things that traditional charity alone could not accomplish, such as the eradication of disease. His sobering point is to remind me and the rest of his readers that this isn’t enough.