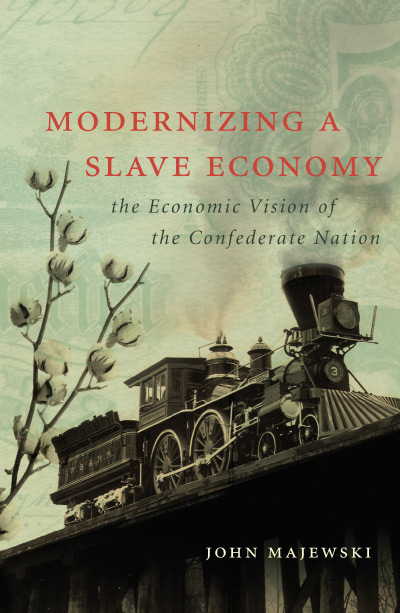 Modernizing a Slave Economy
The Economic Vision of the Confederate Nation
John Majewski
Kindle Hardcover Paperback
This book review appeared in the Summer 2010 issue of The Independent Review.

Given slavery’s worldwide extinction, the topic of modernizing a slave economy seems irrelevant. Nevertheless, in his new book Modernizing a Slave Economy, John Majewski answers some important questions, such as: Why did the Southern states secede, and why did the Confederacy fail? He presents a picture of some antebellum Southerners that many readers will find surprising. Although I have done a great deal of research on antebellum slavery and the Civil War, Majewski’s book illuminates some key questions for me.

The key to the book’s value is its portrayal of secessionists not as a group of free-trade, states’ rights libertarians, but rather as leaders who often had conditional views about free trade and states’ rights. Many, for example, did not want free trade; they wanted lower tariff rates in order to build Southern industry. To make matters even worse, some even wanted the tariff revenues to pay for publicworks projects, such as railroads. They did support states’ rights, but they also wanted a fugitive slave law in order to have the federal government capture runaway slaves.

The South’s ideology was therefore much more Hamiltonian, as opposed to Jeffersonian, than I had previously thought. Thomas Jefferson himself promoted building a state university, made the Louisiana Purchase, and imposed a comprehensive embargo on the economy. The secessionists that Majewski focuses on would have cheered all of these nonlibertarian actions. He examines select secessionist leaders from South Carolina and Virginia. This sample may be biased because these two states supposedly had much to gain in an independent Confederacy. Virginia was poised to become the Confederacy’s industrial base, and Charleston, South Carolina, aspired to become the leading port for European trade.

How strong was this Hamiltonian-secessionist view? Its proponents probably represented a strong minority. The best evidence in support of Majewski’s perspective is that these Hamiltonian secessionists succeeded in getting their way politically until 1865.

Southern secessionism was born out of an ideology that seemed to arise from both the Southerners’ successes and their failures. Individuals in the South succeeded in taming the wilderness and making money. Large amounts of land and a slave workforce produced cotton that fueled the Industrial Revolution. Despite this source of income and wealth, Southerners were concerned about economic development and their declining political power in the United States. In order to remedy this situation, they turned to various economic development schemes, bolstered by the rhetoric of Southern nationalism.

The chief natural defect of farming in the South was the low quality of the soil. Cash crops such as cotton and tobacco quickly exhausted the soil. As a result, farmers practiced shifting agriculture. A forest area would be slashed and burned, and crops would be planted for a number of years. When yields diminished, more forest was burned, and production was shifted to the fresh land. Shifting agriculture was efficient under these conditions, but it required that Southern farms be very large and that only a small portion of the land be productive at any point in time. Farmers had to move from place to place periodically. The result was that although cotton farming was profitable, it produced low population densities, ghost farms, and a lack of permanence that discouraged economic development.

The chief artificial defect of farming in the South was slavery. Slaves produced the cotton, but they could not be true consumers or entrepreneurs (or voters). They represented a high proportion of a low-density population. This situation created unfavorable conditions for the emergence of markets and manufacturing. For example, railroads in the North passed through densely populated farmland. The farming population there represented potential passengers who relied on the railroad to transport both their products and their consumption goods. In the South, however, railroads passed through lightly populated areas in which a high percentage of the population (slaves) consumed few manufactured goods or railroad tickets.

The combination of shifting agriculture and slavery, along with other factors, created a bleak economic and political outlook that led reformers to the cause of state activism. Agricultural reformers advocated collective action in such areas as education, research, and experimentation in agricultural techniques. The primary goal was not to increase production, which could be done simply by moving to virgin land, but rather to eliminate shifting agriculture and the westward emigration it encouraged. Majewski claims that agriculture reformers were ultimately attempting to protect slavery and that they went to great lengths to promote their cause. However, they were not very successful legislatively, and their agricultural reforms generally failed to pass the market test.

Majewski explains that many states’ rights extremists were actually for big government within their own states. This situation is illustrated by the railroad construction boom in the 1850s. State and local subsidies provided half the capital for Southern railroads, or about 200 percent more per capita than in the North. This “build it and they will come” strategy generally failed. During the 1850s, state governments provided backing for railroad bonds and created a railroad boom. Mark Yanochik, Mark Thornton, and Bradley Ewing have found that this boom helped to keep slavery profitable and slave prices high when the price of cotton was relatively flat (“Railroad Construction and Antebellum Slave Prices,” Social Science Quarterly 84, no. 3 [September 2003]: 723–37).

The free-trade tradition in the South rested on the ideas that tariffs reduced Southern exports of cotton and increased the prices of the goods Southerners imported and that the bulk of tariff revenues was spent in the North. However, many Southern extremists were not true free traders in the same sense as Bastiat and Cobden. They had a King Cotton strategy of coercing Europe to aid the Confederacy by starving Europe of cotton. They also adopted a variety of protectionist measures during the war. In my own research on trade policy in the Confederacy, I originally attributed these counterproductive measures to hard-pressed decisions under emergency wartime conditions (see Robert B. Ekelund Jr., John D. Jackson, and Mark Thornton, “Desperation Votes and Private Interests: An Analysis of Confederate Trade Legislation,” Public Choice [forthcoming]). However, Majewski shows that the extremists were never true free traders and that they planned to use protectionism to foster economic development, first by protecting local industry and second by using tariff revenues to pay for public-works projects, such as railroads.

I have long been curious about the growth of government in the Confederacy, and I have even argued that the big-government approach was the central cause of the Confederacy’s defeat. After reading Majewski’s book, I now see how easy it was for slave plantation owners to develop an outlook of the “man of system” central planner who believes he can produce results by moving people around as if they were pawns on a chessboard. On a slave plantation, the owner makes decisions and issues orders, and definite things happen as a result. This outlook is yet another fatal flaw of slavery. Majewski has convinced me that there were enough of these central-planning extremists to advocate and implement state-level fascist policies prior to the war and Confederate-level fascist policies during the Civil War.

If the Southern states had abandoned slavery, they would have been stronger politically and experienced more economic development. However, this change would not have prevented the underlying problem of Northern protectionism because government is always looking for stationary assets to tax, and cotton was too lucrative a target to avoid this fate. With a better, more peaceful ideology in the South, secession might have been avoided, and even if it had not been, the conflict certainly would not have risen to such insane levels.