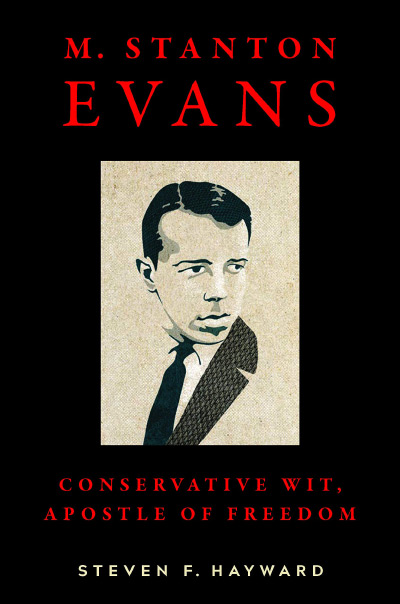 M. Stanton Evans
Conservative Wit, Apostle of Freedom
By Steven Hayward
Kindle Hardcover
This book review is a web exclusive for the Fall 2022 issue of The Independent Review.

Steve Hayward has captured the wit and wisdom of his subject, M. Stanton Evans, known to most of us as simply Stan Evans. Hayward is somewhat more puckish than Stan, who mastered faux seriousness in order to hoist liberals on their own petards. But the spirit of both writers is to have fun and enjoy themselves. Stan’s jokes and one-liners are collected in a separate chapter at the end of the volume.

The book is a traditional biography of Stan Evans. It accounts for his early life and details his influence on a variety of organizations and publications. This review considers Stan’s fusionism and its significance in the contemporary conservative movement.

Hayward’s coverage of Stan’s life includes complete details of the associations that he founded as well as their connection to Republican politicians. The American Conservative Union, CPAC, and National Journalism Center (NJC) are just few of his organizational endeavors. His connections to Barry Goldwater, Richard Nixon, and Ronald Reagan are too tangled for this review. Perhaps most importantly, Stan was a serious journalist, as his detailed scholarship on Communism in government and the life of Joe McCarthy demonstrate. This work entailed untold hours, weeks, and years of intense study in the primary sources in the Library of Congress, and it reflects an older notion of journalism that is sorely lacking at present.

His mother, Josephine, was well educated and taught the classics of Greek and Latin in various public schools. Stan paid far more attention to the Latin classics than the Greek classics. But even more importantly, he held Christianity superior to the Greek and Roman pagans, whom he thought had little or no appreciation for human liberty. When his mother requested Stan to arrange a high Anglican funeral before she died at age 97, Stan remarked that he was having difficulty “finding an Episcopal priest who has leanings towards Christianity” (p. 24).

His father, Medford Evans, was a professor of literature at the Texas College of Arts and Industry (to become Texas A&M). He also taught at the University of the South, Sewanee, where he contributed both poetry and prose to the Sewanee Review. The rot he discerned in the universities may have influenced Stan during his experience at Yale. “[T]he average graduate of a non-elite college today knows less than the average graduate of an accredited high school knew thirty years ago,” wrote Medford Evans. “You may ask: Less of what? If so, I reply: Less of almost any field you care to name...It is sometimes assumed that we have substituted science for the classics. But in the mass institutions this is certainly not true. We have abandoned the classics, but we have not put science in their place” (pp. 24–25).

Stan’s vision of the importance of the natural sciences was evident in the structure of the April 1968 National Meeting of the Philadelphia Society on the Environmental Revolution. At the time, such topics were not commonly discussed among conservatives; but even then he had the knowledge to bring together many esteemed experts. Incidentally, Stan was the most organized of all the Presidents of the Philadelphia Society with whom I worked over nineteen years.

Stan’s education, however, did not end at Yale. “One lesson of Stan’s education at Yale,” comments Hayward, “is that the decisive things are learned as much through self-education outside the classroom as through what is presented in formal courses” (p. 41). What kind of education did Stan absorb outside the classroom? His single most important influence was Frank Chodorov, editor of The Freeman and one of the founders of the Intercollegiate Society of Individualists (ISI). From Chodorov, Stan learned crisp style and the importance of editing, as well as the substance of economics.

Chodorov’s distrust of central planning had deep roots in the Old Testament distrust of kings, and his pamphlet, From Solomon’s Yoke to the Income Tax, was published as a pamphlet by Henry Regnery in 1947, a spin-off of Human Events. These pamphlets had more circulation than one would suppose since they could easily be carried with you in a pocket. I well remember my father reading such material after church at the family dinner at the Hawthorne Room in Indianapolis. Stan’s knowledge of economics was also supplemented by reading the excellent economic journalism of Henry Hazlitt as well as taking a graduate course in economics from Ludwig Von Mises at NYU. Hayek’s Road to Serfdom was also mandatory reading for conservatives in those days. All of these sources formed the free market side of what later became fusionism.

Stan was also influenced by other thinkers and institutions. William F. Buckley was one of Stan’s mentors at Yale and the first president of ISI. ISI originally stood for the “Intercollegiate Society of Individualists” before it became the Intercollegiate Studies Institute under the influence of Vic Milione. Milione did not jettison the free market emphasis of ISI, but he supplemented the value-free methodology and positivism of economics with philosophy, history, and literature. Stan lectured at many a college ISI club and was a loyal member of its Board of Trustees for many years. He and his longtime friend, Don Lipsett, Midwestern Director of ISI, traveled extensively on speaking tours of college campuses throughout the 1950s and 1960s. Stan’s aversion to relativism was nourished by his love of Richard Weaver’s Ideas have Consequences. For young conservatives of those years the bogeyman was relativism. Buckley, Milione, Lipsett and Weaver all contributed to the humane side of his education.

At age 26, Stan came to Indianapolis to be the editor of the Indianapolis News, where he was the youngest editor of a major newspaper in the United States. For a while Stan and Don Lipsett shared an apartment in Indianapolis which my wife, Helen, and I visited. All the descriptions are accurate: newspapers, journals, and books everywhere. The bathtub was filled with dirty shirts, because when the shirts got dirty, they found it easier simply to buy new ones. In the late 1950s Stan became managing editor of Human Events, ground zero of what would become Hilary Clinton’s “vast right-wing conspiracy.” Stan used to quip that “when I was starting out it was only half-vast.” Stan himself could take credit for it becoming two-thirds vast, but he was always modest and unassuming about his own accomplishments.

Stan felt comfortable in Indiana and often described his politics as that of a farmer in Seymour, Indiana: “Loves this country, loves God and his community.” But Stan knew that the farmer’s children were likely to be influenced by their college education and the media. Most of his writing was therefore devoted to the sons.

The undying legacy of Stan Evans is his understanding of what has come to be called “fusionism.” One defect of Hayward’s book is his brief notice of this topic, which he describes as the fusion of libertarianism and traditionalism. Although “fusionism” was often used, nobody really liked it—not even Stan. It suggests an artificial forcing together of incompatible elements; and Stan was neither a doctrinaire libertarian nor an uncritical defender of tradition. He believed in free markets both for the creation of prosperity and as a moral good for individuals.

In fact, what he found most important of all was the common sense of American political experience. The distrust of power is at the core of the American Revolution, and it drives our adherence to constitutional government. Stan’s magnum opus, The Theme is Freedom (Regnery, 1994) is required reading for anyone who wants to understand American conservatism and its roots in constitutional law.

Who are the heirs fighting under this standard today? Don Devine represents the many practical conservatives represented in the Philadelphia Society, ISI, the Heritage Foundation, and numerous think tanks throughout the United States. He has done the best job of protecting Stan against the anti-liberals, most notably Patrick Deneen and the various integralists, who have nothing but scorn for defenses of economic freedom. The anti-liberals really object to John Locke, who supposedly lies behind the slippery slope from classical liberalism to contemporary secular liberalism, with its relativism and lack of objective morality.

Stan Evans carefully avoided putting too much emphasis on Locke by pointing out that American constitutional liberties preceded him by more than a half-century. They are the result of English struggles against tyrannical monarchs from Magna Carta to the battles against the Stuarts. The long colonial experience of self-government also extended the sources of tyranny to include the British parliament.

In the meantime, the Puritans who fled England for the New World were born and bred in these battles for human liberty. Drawing upon their covenantal theories of church government and Old Testament fear of kings and empires, they knew that kings and sovereign powers were under God and under law. These roots of American liberty have been explored in depth by Ellis Sandoz (1993, The Roots of Liberty: Magna Carta, Ancient Constitution, and the Anglo-American Tradition on Rule of Law, Columbia: University of Missouri Press).

Although many other books and scholars could be cited, the single most important contemporary scholar who affirms the religious underpinnings of ordered liberty in the earlier English common law tradition is Yoram Hazony. The spiritual importance of the Old Testament and the Judeo part of the Judeo-Christian alliance reads like a paraphrase of Stan Evans’ recounting of U.S. constitutional history. Although Hazony wants to make a sharp distinction between his views and fusionism, that is because he thinks that John Locke’s abstract liberalism underlies the connection to economic liberty. Had Hazony paid attention to Stan’s development of the economic side of fusionism it might have fostered a deeper consideration of John Fortescue, Edward Coke, and the common law tradition. Curiously enough, to my knowledge Hazony never cites The Theme is Freedom. Both Hazony and Evans would agree that Fusionism is not dead but can only be nourished in a culture which takes the Bible seriously.