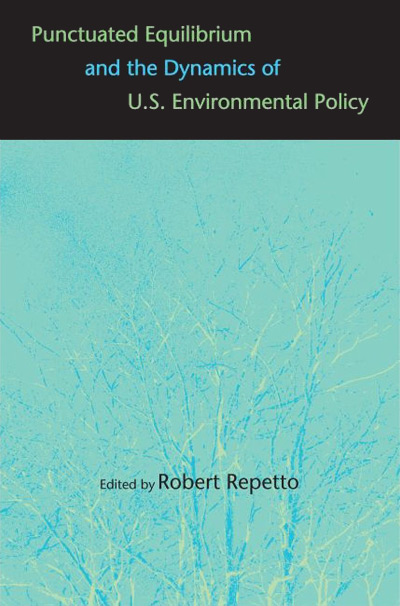 Punctuated Equilibrium and the Dynamics of U.S. Environmental Policy
Edited by Robert Repetto
Kindle Paperback
This book review appeared in the Spring 2008 issue of The Independent Review.

Since then, however, life has become more difficult for environmentalists. In the rush to enact the environmental legislation, utopian goals were proclaimed, impossible deadlines set, cumbersome regulations required, administrative practicalities ignored, and economic efficiency generally slighted. By the beginning of the Reagan administration, a backlash had set in. Environmentalists in the 1980s continued to win many victories, but the victories came slower and at higher costs. By the 1990s, environmental policymaking was stalemated. In the first decade of the twenty-first century, confronted with a hostile George W. Bush administration and achieving few successes elsewhere, the American environmental movement had to make a general reassessment of its methods and goals.

Punctuated Equilibrium and the Dynamics of U.S. Environmental Policy is one product of that effort. Editor Robert Repetto recognizes that the environmental crusade of the 1970s will not be repeated. How, then, facing a less accommodating and more complex policy environment, should environmentalists act to maximize their future impact? How does the American policymaking process work, and what are the points of maximum potential leverage for environmentalists? With contributors who seek answers to such questions, the book has three chapters devoted to general discussions of the policy process and six chapters that offer case studies of particular areas of environmental policymaking.

The three general chapters emphasize the disjointed and discontinuous character of policymaking, as captured in the metaphor of “punctuated equilibrium,” which refers to the tendency in the plant and animal kingdoms for Darwinian evolution to occur in sharp bursts of change, followed by long periods of relative stability. Few would dispute this characterization. As other authors have already noted, periods of especially rapid change in U.S. government programs and policies include World War I, the Depression of the 1930s, World War II, and the Great Society of the 1960s. With regard to social values, the 1960s and 1970s brought not only the sudden rise of environmentalism, but also the U.S. civil rights movement and a revitalized feminist movement, as well as drastic changes in musical tastes, sexual freedoms, popular attitudes toward government, and other areas of American life. In the wider world, the end of communism in eastern Europe in 1989 and the demise of the Soviet Union in 1991 provided especially striking examples of sudden and unexpected governmental change on a grand scale.

There is probably no single explanation of the discontinuous fashion in which major policy change often occurs. In some cases, such as the outbreak of a waror other emergency, powerful external events trigger the rapid change. In other cases, such as the breakup of the Soviet Union, no such obvious trigger exists. For these cases, Timur Kuran offers one possible interpretation: the existence of a social consensus at any given moment, a growing recognition of the falsity of that consensus, the high personal and professional costs of individual deviations from it that result in the routine telling of “public lies” about it, and then finally a sudden crumbling of the policy consensus as more and more people defect, thus rapidly reducing the costs of further individual defections and leading to sudden policy change (see Private Truths, Public Lies: The Social Consequences of Preference Falsification [Cambridge, Mass.: Harvard University Press, 1995]).

In one chapter of Punctuated Equilibrium, political scientist Frank Baumgartner writes similarly of “social cascade effects.” As he notes, environmental policymaking might be especially susceptible to such effects because of the “extremely powerful symbols associated with policy outcomes on all sides” (p. 42). In many environmental policy disputes, taking one direction or another becomes an act of virtual religious choice. Given such high stakes, there is little willingness to compromise, but when the dam breaks, a policy torrent may follow.

In another chapter, William Brock seeks to model the political process mathematically to explore the possible dynamics of “tipping points” and other forms of discontinuous policy change. The formal modeling does not seem to add much, but it does illustrate one feature of this book—a prominent concern to wrap the analysis in the mantle of scientific legitimacy. Use of the term punctuated equilibrium appeals to Darwinian scientific authority; Brock is appealing more to the authority of Newton, as if the policymaking process can be described according to precise mathematical rules, as a physical system might be.

Although the book’s repeated forced references to the presence or absence of a punctuated equilibrium can be annoying, they do not fundamentally alter the usefulness of the six case-study chapters. The most valuable one is by Robert Repetto and Richard Allen, who examine the policy evolution of fish-harvesting rights since the mid-1990s. As economists have long noted, most marine fisheries have the classic characteristics of a tragedy of the commons. Yet fishermen and others involved in the industry had to see the collapse of a fishery for themselves before they were willing to consider any serious policy departures. Even in the face of a growing numberof fishery meltdowns, the participants fiercely resisted change.

A major sticking point concerned the assignment of the new rights. Some form of grandfathering was likely, but significant disputes remained even within that framework. Another obstacle arose from “processors who fear[ed] loss of business if a fishery [were to be] rationalized” (p. 121). Fisheries biologists, like most natural scientists who venture into policy realms, were largely ignorant of economics and gravitated to what seemed the most direct form of harvest control—strict government regulation (which would also maximize the future demands for their services). Some environmental organizations, such as Greenpeace, were ideologically opposed to the very idea of “creating private property rights in a public resource” (p. 121). In 1996, reﬂecting the combined political potency of all these and other forces, Congress imposed a moratorium on any new systems of fishery rights— or, in the jargon of the trade, on any new system of individual transferable quotas (ITQs).

Luckily, a few ITQ systems were already in place and were grandfathered. Most important, a previously established ITQ system for the Alaskan halibut fishery soon proved a resounding success, raising the prices paid to fisherman, improving safety, cutting by-catch losses, reducing ﬂeet overcapacity, and offering other significant benefits. With ITQs no longer only a theoretical idea, fishermen and politicians could actually grasp the benefits. Strong opposition to any “privatization” of rights was still expressed, but Congress nevertheless allowed the ITQ moratorium to expire in 2002. In the years since, as more ITQ systems have been adopted, a policy tipping point finally may have been reached.

The great Japanese economist Yasusuke Murakami once raised a fascinating question: Could capitalism ever have been adopted in a precapitalist society if its adoption had required democratic majority approval in advance? He was skeptical. Today, even in the United States, abstract arguments for new systems of rights in particular areas provoke fierce democratic opposition. Given the distributional tensions associated with the introduction of new systems of rights and many people’s apparent incapacity to deal in economic abstractions, social learning in this area can apparently take place only by direct experience. The case of highway congestion pricing is perhaps the most prominent example today of democratic irrationality about rights and pricing, an example in which the status quo is preserved at huge public cost.

This point is further illustrated in a chapter by Helen Ingram and Leah Fraser on the development of a market for water rights in the California Delta, where the Sacramento and San Joaquin rivers combine before ﬂowing into San Francisco Bay. Matters there had reached a crisis stage. Insufficient water was available to accommodate traditional uses and to meet rapidly increasing demands for assisting endangered species and serving other environmental purposes. The largest established users were farmers. Within the longstanding framework of government regulation of water use, powerful government commands and controls would have been required to transfer water out of agriculture. A virtual war between the government and the farmers might have resulted.

As in fisheries, economists had long advocated the establishment of water rights and their marketing as a solution. In 1989, Interior Department economist Richard Wahl published a book-length treatise that carefully documented the large potential gains from doing so (Markets for Federal Water: Subsidies, Property Rights, and the Bureau of Reclamation [Washington, D.C.: Resources for the Future]). Yet politicians, farmers, state water administrators, and many other “practical” men and women of affairs remained deeply skeptical. In the 1990s, however, they were forced in desperation to begin paying California farmers for Delta water to supply a new Environmental Water Account (EWA). The water simply could not be obtained in any other way.

Even then, as Ingram and Fraser explain, given all the usual sources of opposition to any new systems of rights, the EWA had to start as a temporary expedient whose establishment was possible only because the many critics “were convinced that the failure of the program would bring on its own demise” (p. 100). To their surprise, “quite the opposite . . . happened” (p. 100). Water marketing ﬂexibly provided the water to meet critical environmental demands. At the same time, “agriculturalists have come to depend on revenues available from water leases to help them in time of high costs and low agricultural prices” (p. 100). Fishery managers became newly adept at water purchases and sales, reﬂecting “a paradigm shift” within their profession in which, given a fixed budget for water each year, they were now for first time “interested in how much water costs” (pp. 100–101).

The case studies presented in the volume also include another example of sudden policy change: the radical curtailment of federal timber harvesting in the Pacific Northwest in order to meet the habitat requirements of another endangered species, the Northern Spotted Owl. This chapter unfortunately fails to consider many important features of this national-policy drama. For example, because the costs of the forgone federal timber harvests (with a value perhaps on the order of $20 billion over the long run) were born for the most part by the federal Treasury and thus were spread across the entire population, there was no need to compensate any losing rights holders. Unlike California fisheries managers who had to buy water rights, federal wildlife biologists then showed little or no concern to economize on the value of the federal timber supplies that they were newly committing to owl preservation.

Three other chapters examine areas of longstanding policy stalemate—climate change, corporate-fuel-economy standards (CAFÉ), and livestock grazing on federal lands in the western United States. The chapters on climate change and CAFÉ provide useful and at times insightful summaries of these policy debates. The grazing chapter fails to note the close parallels with the fishery issues discussed elsewhere in the same volume, among other significant weaknesses.

Overall, five strong chapters make Punctuated Equilibrium and the Dynamics of U.S. Environmental Policy a valuable addition to the literature of environmental policymaking. However, for those more interested in broader questions of U.S. policymaking and specifically in the reasons why, in general, long periods of stalemate are broken by bursts of hectic, major change, this book has little to offer.

Robert H. Nelson
University of Maryland
Energy and the EnvironmentEnvironmental Law and RegulationGovernment and PoliticsGovernment Waste/PorkWater Resources
Subscribe Buy This Issue Get the App