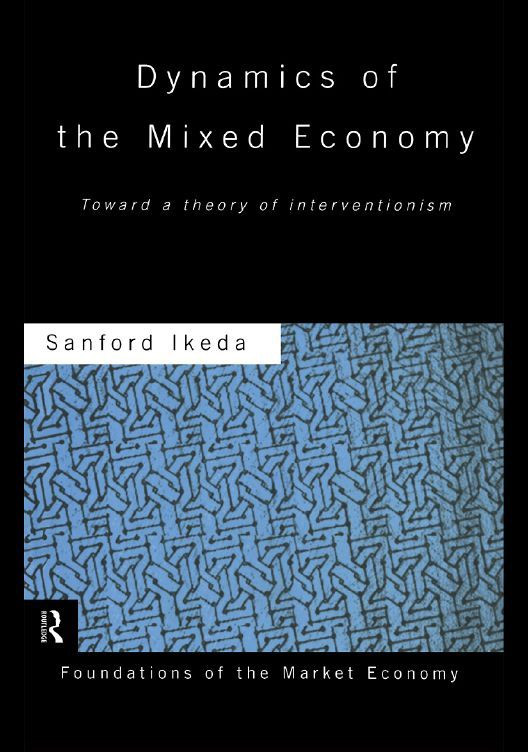 Dynamics of the Mixed Economy
Toward a Theory of Interventionism
Sanford Ikeda
Kindle Hardcover Paperback
This book review appeared in the Spring 1998 issue of The Independent Review.

The Austrian school of economics, once barely visible at the fringe of academia, has been growing in strength in recent decades, and Sanford Ikeda’s book is a good example of the scholarship coming from members of this school. The book fills an important gap in the school’s work, because Austrian economists have written extensively on the operation of a pure market economy and on the problems of a centrally planned economy, but they have written relatively little about the operation of the far more common mixed economy. Ikeda uses the insights of Austrian economics, blended with ideas from other schools of thought, to develop his theory of the mixed economy. He explains why government involvement in the economy tends to grow over time, how government intervention misallocates resources, and why people put up with and even encourage government growth even though it makes them worse off.

The modern Austrian school owes its existence to Ludwig von Mises (1881—1973), who began his career in Vienna and eventually migrated to New York, where a small group of his students spread the word and sparked an Austrian resurgence. As a result, the “Austrian” school now exists mostly in the United States, and Ikeda is a participant in its resurgence. He presents an extensive review of the literature on which he builds, describing the ideas of others and categorizing them according to schools of thought. For example, he distinguishes between Chicago public choice and Virginia public choice and explains why some ideas are more “Austrian” than others. This preoccupation with methodological issues and schools of thought tends to be a characteristic of writers in the Austrian school, but Ikeda’s literature review serves the book well by laying a foundation and framing his work within the larger context of the work he builds on. After developing his foundation, he proceeds to build the superstructure, his theory of the mixed economy.

A major theme in Austrian economics pertains to how markets use knowledge more effectively than government, and Ikeda builds on this idea to explain how the mixed economy allocates resources. In a mixed economy, government decision makers can use information generated by markets, but as government grows relative to the market sector, market prices contain less information to guide resource allocation, rendering the economic system less efficient. Thus, smaller governments naturally act more efficiently than larger ones. In addition, government institutions often contain incentives to make decisions that work against the public interest, and because government decision makers have no invisible hand to pull them toward socially desirable policies, the self-correcting aspects of market activity play no role in the public sector. As government grows, the ability of the price system to effectively convey information leading to efficient resource allocation breaks down.

The process could reverse itself in two ways. Interventionism could create such chaos that the system eventually collapses, resulting in wholesale “dis-interventionism” (to use Ikeda’s term) and a return to a more laissez-faire economy. Alternatively, perceiving negative effects of government intervention, people might initiate a removal of the interventions with the most obvious negative effects. Deregulation of airlines and long-distance telephone service provides two examples.

Ikeda carefully distinguishes public-sector inefficiencies that arise from imperfect information from those that arise from self-interested behavior. People may seek personal benefits rather than the public interest, causing government inefficiency. Even if they do not, however, voters, legislators, and bureaucrats lack the information needed to make efficient decisions. The problems are twofold. First, knowledge in an economy is dispersed, and government decision makers, unlike the market system, have no way to coordinate this knowledge. Second, decision makers often are unaware that they lack some beneficial information. Market rewards for entrepreneurship provide the incentive to utilize such information when it appears, but the public sector lacks an incentive for similar entrepreneurial action.

Ikeda divides all government intervention into two broad categories: regulation and redistribution. Ostensibly, government regulators seek to allocate resources more efficiently in cases with market imperfections. Yet regulation itself, by interfering with the market mechanism, affects prices and results in price signals that do not accurately reflect opportunity costs. In addition, because regulation constrains human action, it creates a barrier to the entrepreneurial discovery of market alternatives for dealing with inefficiencies. Thus, although regulation may reduce inefficiency in the short run, it creates more inefficiency in the long run. Furthermore, effects in one market spill over into other markets, creating more widespread inefficiency and demands for more regulation to control these cascading effects.

Ikeda describes how transfer activity disrupts the market process, but he gives far too little emphasis to how that redistribution makes predators out of producers. The poor are a small part of the story. Government subsidies to businesses, favorable regulations, and barriers to international trade are but a few examples of redistribution to the rich. Indeed, when one considers that resources can be devoted to seeking transfers, it is apparent that the rich have more potential than the poor to gather government transfers. Devoting resources to predation rather than production reduces total output. Although Ikeda mentions this type of rent seeking elsewhere, it remains outside his model of government transfers. He concludes that regulatory intervention is more destabilizing than redistributive intervention (p. 221), but if he had considered the problems created by rent seeking more seriously, he might not have arrived at this conclusion.

Considering whether a minimal state would tend to remain small, Ikeda concludes that it would tend to grow because of the same information problems that cause interventions to build on themselves. Lack of complete information will prevent the state from producing optimal tax structures or efficient public output, resulting in demands for intervention. Again, Ikeda ignores the diversion of resources from production toward attempts to gain government transfers. The potential for rent seeking reinforces his conclusion that a minimal state will tend to grow.

As a treatise in economic theory, Ikeda’s book is targeted toward a narrow audience, but it has much to offer that audience. Readers interested in theories of government resource allocation will find that Ikeda offers much insight, even if they do not share his obvious dislike of government intervention. Because Ikeda works within the Austrian tradition, the book offers those not familiar with that school a good introduction to how Austrian ideas can enrich an analysis of the public sector. For the Austrians themselves, Ikeda’s book represents a substantial advance by developing a theory of the mixed economy that complements the well-developed Austrian theories of pure market allocation and pure socialism.