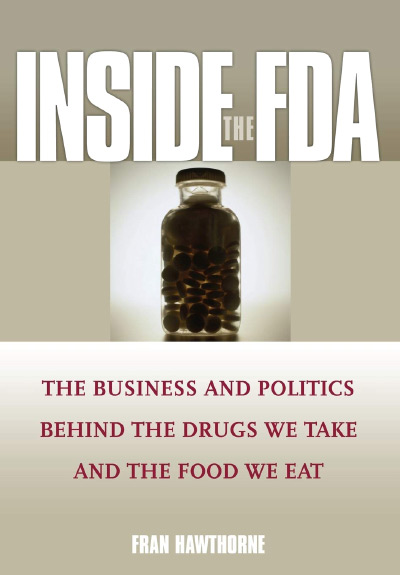 Inside the FDA
The Business and Politics Behind the Drugs We Take and the Food We Eat
Fran Hawthorne
Kindle Hardcover Paperback
This book review appeared in the Winter 2006/07 issue of The Independent Review.

In October 1988, one thousand AIDS activists, patients, and supporters marched on the U.S. Food and Drug Administration’s (FDA) headquarters in Rockville, Maryland, to protest what they viewed as the agency’s apathetic approach to the introduction of new AIDS treatments. As Fran Hawthorne describes the scene in Inside the FDA, some of the marchers carried signs with messages such as “FDA red tape killed me” (p. 54). Many protested that the FDA’s indifference arose from the same antigay bigotry they experienced from the rest of society. The real tragedy, however, is that the agency’s slow pace in approving drugs was not the result of discrimination. The FDA was treating AIDS patients just as it treats everyone else.

Indeed, by FDA standards, AIDS medicines were getting special, accelerated approvals. A year earlier the agency had cut short the customary three-phase clinical-testing regimen and approved azidothymidine, or AZT, after the drug showed strong results in its Phase II trials. Most drugs go through roughly six or seven years of clinical testing before manufacturers even submit a New Drug Application for the FDA’s review. Then, agency reviewers take another year or two on average to comb through the assembled data and make an approval decision.

Drug names such as Thalidomide and Vioxx serve as a constant reminder that approved drugs can sometimes have very harmful effects. So agency drug reviewers know they have to be extra cautious in making approval decisions. Yet, as far too many AIDS patients have found, when that attitude leads to lengthy delays between the time new drugs are found to be “safe” and when they are approved for sale, overcaution can be deadly.

Few books for a general audience describe as clearly as Inside the FDA does the competing tensions that govern the FDA’s operations. The agency can make what statisticians call Type I errors, approving drugs that later turn out to have harmful side effects that outweigh any therapeutic benefit. Or it can make Type II errors, denying approval for drugs whose benefits would swamp any risks. No drugs are totally safe. So the FDA’s mission is to chart a course that balances the risk of moving forward too quickly with the risk of staying too long in the past. Both approaches have serious health consequences. Both can kill.

The repercussions of making a Type I error or a Type II error differ greatly, however, for FDA drug reviewers. When even a few deaths are linked to an approved drug, the fatalities are prominently flogged in the “if it bleeds it leads” news media; congressional hearings are called to excoriate the FDA’s hastiness; and the agency is put on notice that it should always “err on the side of caution.” When the FDA denies approval of a beneficial new drug that could have saved thousands of lives, however, the victims are politically invisible. Neither they nor their families are likely to know that a possible cure was kept from them. Where there is no smoke (photo-ready victims), there is no fire (media righteousness or congressional indignation).

Unfortunately, Fran Hawthorne sees little problem with this agency world-view. After all, she writes, “[t]hat is actually not an unreasonable bias for a regulatory agency” to have (p. 28). Why? When FDA commits a Type I error, “the status quo will be disrupted and people will die much sooner than they otherwise would.” When the agency commits a Type II error, people will be denied a treatment for their illness, but “the status quo will remain” (p. 81).

Hawthorne’s indifference to natural causes of death notwithstanding, her book is no polemic. Inside the FDA tries to be a serious book, and the author does present two sides of the story, matching argument with counterargument and trying to differentiate the light from the heat. The book fails, but perhaps not for a lack of trying.

Hawthorne is a health-care and financial reporter, and the book reflects her reportorial technique. It relies heavily on interviews, not first-hand knowledge or analysis of empirical research. On the one hand, the author’s breezy style, focused on personalities rather than on data, makes for a very readable book. On the other hand, it means the book lacks the insights, depth of knowledge, and consistency that a true scholar might have added.

The volume’s biggest problem is not that Hawthorne ignores or downplays the arguments of those who are critical of the FDA’s preference for Type II errors, although occasionally she does. Rather, it is that she appears not to understand the nuances of the many arguments she presents, including both those with which she agrees and those with which she disagrees. Hence, she often glosses over important considerations or mischaracterizes important details.

Hawthorne also swallows hook, line, and sinker certain antibiotechnology propaganda regarding bioengineered foods. She claims, for example, that Reagan administration officials bowed to the biotech industry over the judgment of agency scientists and decided not to subject bioengineered foods to a premarket approval process like that for drugs (p. 173). Nothing could be further from the truth. Even prior to the Reagan administration’s regulatory decisions, two National Academy of Sciences reports had concluded that bioengineered products should not be subject to any different regulatory requirements than conventional products. Ironically, the biotech industry actually lobbied for heightened regulatory reviews because its representatives believed that premarket approval would promote public acceptance. The Reagan administration’s Agriculture Department and Environmental Protection Agency did create, in fact, a mandatory premarket approval process. The FDA did not, but it did implement a higher level of scrutiny for bioengineered foods, over many agency scientists’ objection.

Among the book’s more annoying qualities is the author’s inability to apply a consistent analytical framework. Instead, she advocates a hodgepodge of more-restrictive and less-restrictive policies that often seem contradictory. For example, she condemns the FDA’s drug-review policies as dangerously lenient and beholden to industry (p. 145), criticizes the agency for not doing more to restrict dietary supplements (p. 57), and calls for a crackdown on direct-to-consumer pharmaceutical advertising (p. 271) and on unauthorized, or “off-label,” use of approved drugs (p. 298). At the same time, however, she insists on faster approval of AIDS and cancer drugs (p. 49), demands over-the-counter status for the morning-after birth-control pill known as Plan B (p. 219), and congratulates the agency for approving the fat substitute Olestra despite consumer-group protests and for later rescinding a mandatory warning about alleged intestinal cramping and other side effects of this product (p. 171). All these latter positions are tenable, but Hawthorne never squares them with her insistence that slower is better, that only doctors are capable of making important treatment decisions, and that consumers should be warned about even hypothetical risks.

Perhaps the only consistent theme that runs throughout the book is Hawthorne’s portrayal of Democratic politicians and agency officials as public heroes and of Republicans as profit-obsessed apologists for business. She derides Republican efforts to shorten FDA review times as “drastically curtail[ing] the FDA’s authority in the name of getting medication out to people faster” (p. 60), as though doing so were a bad thing. And she chuckles that a proposal to let private certification agencies review drug safety would obviously fail because such private agencies do not exist.

Of course they don’t exist—at least not in the form envisioned by their advocates—because federal laws do not now permit private certifiers to challenge FDA’s monopoly of drug approval. But countless private bodies, from medical professional societies to insurance plans, continually evaluate scientific research in order to make recommendations to their members about the safest and most effective treatment options. It is not so radical to think that the American Medical Association or the Society of Clinical Oncology might be just as capable of certifying safety and efficacy of new drugs as a federal government agency.

Hawthorne also apparently never heard of the Access to Medical Treatments Act, a bill that would let patients and their doctors choose drugs that are not approved by the FDA or anyone else. Now that is radical. For years, this bill has been introduced at each session in the Senate by Iowa Democrat Tom Harkin and in the House of Representatives by Oregon Democrat Peter DeFazio. If Hawthorne knew that some of its cosponsors were Republicans, perhaps that information would have merited a mention in her book?

Hawthorne’s agenda is ultimately not just to bash Republicans or even to improve FDA decision making. Rather, she sees herself as a latter-day Upton Sinclair, who hopes to remake the agency into one whose authority would extend into every aspect of our existence. FDA regulation of the safety and efficacy of every pharmaceutical sold in the United States is not enough. Hawthorne wants the agency to use its “bully pulpit” to encourage certain kinds of drug research and to discourage others (pp. 52, 278). She would prefer, for example, that fewer people have access to “frivolous” lifestyle drugs, such as Botox, Rogaine, and Prozac (pp. 273–76). She also calls on the agency to combat obesity by mandating improved nutrition and encouraging physical fitness, so society will need fewer medicines in the first place (p. 297). And she calls on Congress to grant the FDA the authority to restrict smoking (p. 300) and bring dietary supplements into its premarket approval process (p. 57).

The FDA already regulates one-quarter of the U.S. consumer-goods economy—everything from pet food to lipstick to airport X-ray machines. Although most Americans are comforted to know that someone is watching over the drugs they take and the food they eat, government intervention inevitably means that regulatory choices will be too lax for some, too strict for others, and always subject to political pressures. Perhaps it is time to consider not what else the FDA might regulate, but how public policy might be changed to give us all more and better choices?