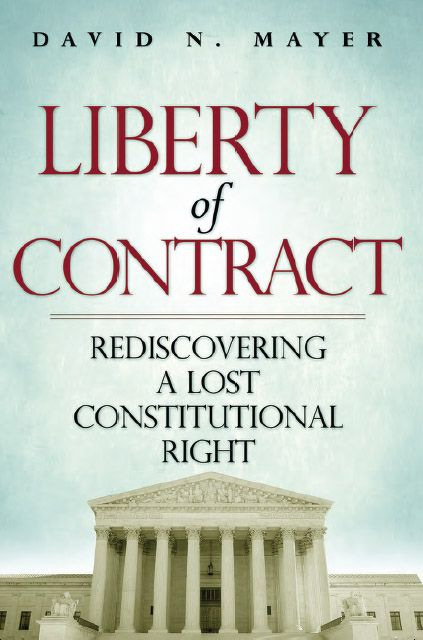 When modern lawyers or judges mention Lochner, liberty of contract, and substantive due process in the same conversation, they are most likely accusing some tribunal of judicial activism. The offending jurists have rejected a policy choice by the legislature and instead, their critics contend, have written a competing policy preference into law.

Although true judicial activism deserves censure, David N. Mayer seeks to change the language of the debate. In his new book Liberty of Contract, he challenges the orthodox understanding that Lochner v. New York (198 U.S. 4 [1905]) was the beginning of a disreputable era of judicial activism that ultimately ended in the 1930s.

Lochner dealt with a New York statute prohibiting bakers from working more than sixty hours per week or ten hours per day. The state argued that the statute was a simple exercise of police power—the reserved power to pass general legislation to promote the public’s health, safety, and welfare. The Supreme Court, however, held that the statute deprived bakers of liberty without due process of law. Asserting that bakers were not “wards of the state,” the Court found “no reasonable ground for interfering with the liberty of person or the right of free contract by determining the hours of labor, in the occupation of baker” (at 57). The Court rejected the idea that reasonable legislators might conclude that working long hours near hot ovens was unhealthy and thus should be regulated. In an oft-cited dissent, Justice Oliver Wendell Holmes accused the majority of being disciples of Herbert Spencer and of writing Spencer’s laissez-faire views into the Constitution.

Mayer defends the use of the due process clauses of the Fifth and Fourteenth Amendments in a substantive rather than a procedural manner. Although the framers of the Constitution, such as Alexander Hamilton, clearly stated that “[t]he words ‘due process’ have a precise technical import, and are only applicable to the process and proceedings of courts of justice; they can never be referred to an act of the legislature” (“Remarks on an Act for Regulating Elections,” February 16, 1787, in Papers of Alexander Hamilton, edited by Harold Syrett and Jacob Cooke [New York: Columbia University Press, 1961–79], 4:35), Mayer argues that statutes must undergo substantive review in court. Mayer bases his argument on the grounds that the framers understood liberty in very broad terms and that they rejected status as the organizing principle of society and instead chose contract. Based on an expansive understanding of liberty and the primacy of contract, he defends the use of substantive due process to strike down laws unnecessarily curtailing individuals’ liberty.

Mayer ably debunks the myth that the Lochner era was a heyday of libertarianism on the Supreme Court. He shows that rather than marching to Spencer’s drum, the Court took a much more moderate approach. At base, the Court adopted a presumption of liberty modified by numerous exceptions to the rule, such as Sunday closing laws, usury law, and lottery prohibitions. The exceptions, Mayer points out, were broad, and many statutes were upheld as valid exercises of the police power. Contrary to liberal historians’ contentions, this historical period was no freewheeling era of laissez-faire constitutionalism.

Mayer also shows that the Court protected much more than “economic rights” when defending liberty of contract via substantive due process. He demonstrates that decisions such as Pierce v. Society of Sisters (268 U.S. 510 [1925], striking down a compulsory public schooling statute) and Meyer v. Nebraska (262 U.S. 390 [1923], striking down a law prohibiting the teaching of German), which are today considered right-to-privacy cases, were outgrowths of the presumption of liberty applied by the Supreme Court.

Mayer strongly defends the Lochner Court’s use of a “moderate means-end test” to create “a general but fairly rebuttable presumption in favor of liberty” (p. 115). He suggests that such a standard should be preferred to modern judicial tests, where the presumption is in favor of government action rather than individual freedom.

The one thing missing from the book is an extended discussion of the courts’ role and the doctrine of judicial review. Mayer does not wrestle with the question of how far we can trust unelected, life-tenured federal judges to review actions of elected (and thus accountable) officials. A court must undoubtedly strike down a law that is clearly against the manifest tenor of the Constitution, such as a statute that deprives a state of its representation in the Senate. But how far should courts go when a provision of the Constitution is susceptible to multiple reasonable interpretations? In granting the courts a power to judge the substantive reasonableness of laws, do we not convert judicial review into judicial supremacy? Without a discussion of these issues, it is difficult to grasp the positives and negatives of the Lochner Court fully.

Nonetheless, Liberty of Contract is essential reading for any student of the Lochner era. Mayer challenges many of the orthodox interpretations and offers new insights into substantive due process. His book is a sound contribution to U.S. legal history and should cause many of the “court” historians to reevaluate early-twentieth century jurisprudence.