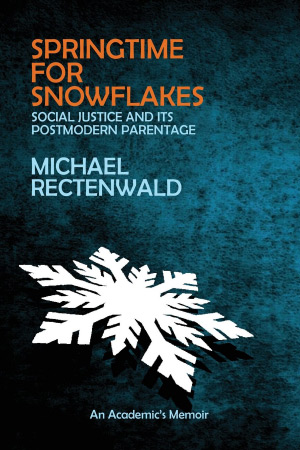 Springtime for Snowflakes
Social Justice and Its Postmodern Parentage
By Michael Rectenwald
Kindle Paperback Audiobook
This book review is a web exclusive for the Spring 2019 issue of The Independent Review.

What is “social justice”? The Independent Review will tackle this topic in a symposium in its Summer 2019 issue. These authors largely advance the idea that social justice will flourish in a culture where individuals behave civilly toward one another, society encourages cooperation, and the state is restrained. However, an army of academics has armed itself to attack anyone advocating such a retrograde view.

Despite their evident desire to make the world more just, the authors in TIR’s symposium have little credibility in the eyes of many academics. Unlike, Michael Rectenwald, they have never been part of the social justice “movement.” Rectenwald was once a soldier in this army. His fascinating memoir explains how a one-time “social justice warrior” deserted his comrades—committing the treason of questioning the social justice movement’s most fundamental principles, as well as its motives and tactics.

Every life is fascinating, Rectenwald’s particularly so. He grew up as an intellectually-inclined member of a large (eight siblings) working-class family in Pittsburgh. Casting off the restraints of Catholicism, he became a radical. After college, he became the apprentice of counterculture poet and philosopher Allen Ginsberg, only to return to a more conventional life in advertising and radio. He tossed aside this promising career and the suburban lifestyle after picking up a copy of Herbert Marcuse’s One Dimensional Man, trading nine years in the “prison house” of corporate America to become institutionalized for a much longer stint in what he describes as the insane asylum of academia.An M.A. in English from Case Western University and a Ph.D. in Literary and Cultural Theory/Studies at Carnegie Mellon University made him a postmodern scholar.

The heart of the memoir is his recollection of the ideas that shaped this education.

Rectenwald read and embraced all the deconstructionist postmodern bogeymen who outsiders have often only heard about around the campfire, people like Jacques Derrida, Jean-Francois Lyotard and Michel Foucault, as well as many whose names they have never encountered. He learned how to “ironize” the social order of “late capitalism.” He became part of the intellectual avant-garde. Reading Roland Barthes’s “The Death of the Author” and Foucault’s “What Is an Author?” he learned “the real role of authors is to stymie the proliferation of meaning . . . The author is not the source of meaning in a work but rather a limiter of it. . . . [A]uthors do not create works. Works create their authors!” (p. 62). Rectenwald confides, “I begrudgingly began to surrender any belief in myself as an ‘author.’ Although I felt disburdened of a great weight . . . I also experienced a significant loss, akin to the loss of a long-time lover” (p. 63)—something he learned more about first-hand as academic obsessions destroyed his marriage.

Later, he was baptized in the waters of feminism and gender studies. “I found the idea of the social construction of gender gratifying and I must admit that I enjoyed gender constructionism, partly for its shock value. . . . I had been firmly convinced of the social and linguistic construction of gender. I wasn’t merely play-acting” (p. 71). But this insider was an outsider, because—as a white heterosexual male—he wasn’t an Other and knew that he was trespassing where he could easily land in rhetorical, social, and professional hot water.

Next he learned, from Gyorgy Lukas’s History and Class Consciousness, that each person has his or her own truth. He learned that, in the social justice worldview, “knowledge is personal, individual, and impenetrable to others . . . [E]veryone is locked in an impenetrable identity chrysalis with access to a personal knowledge that no one else can reach” (p. 74). (R. Scott Smith’s contribution to TIR’s symposium, “Social Justice, Economics, and the Implications of Nominalism,” focuses on this Achilles Heel of the social justice movement.) This epistemological solipsism gives rise, Rectenwald explains, to a “morality-through-being” or “identity ethics” that results in a “moral ranking in which the lowest on the totem pole is deemed a moral superior by virtue of her (previous) subordination” (p. 75). Therefore, he concludes “social justice ideology does not foster egalitarianism. Rank is maintained, only the bottom becomes the top when the totem pole of identity is inevitably flipped upside-down and stood on its head” (p. 75). As people strive to compete in the “Oppression Olympics,” the “race to the bottom is really a race to the top” (p. 75). If you want to know the social justice movement’s influences and mindset, read these chapters for yourself.

Ultimately, Rectenwald moved into the field of Science Studies, analyzing science through the prism of his graduate education. After a messy stop at a historically black college, he became a rising star and found a position at a top university—NYU.

However, Rectenwald had retained a streak of rebelliousness—even against academia’s embrace of postmodern identity politics. Eventually he concluded that the “postmodernist is like a person attempting to milk a tree. When asked why he is trying to milk a tree, he responds that the word ‘tree’ is an arbitrary designation and bears no necessary correspondence with the object designated as such” (p. 154). Finally, Rectenwald reports, “I reached my social justice tipping point” (p. 105). The University of Michigan had instituted a policy whereby students could select any pronoun—not just “he” or “she”—and demand everyone use this pronoun. One student chose “His Majesty” as his pronoun. “This satirical trope hilariously underscored the absurdity of gender and pronoun proliferation, and the institutional lunacy that has attempted to keep pace with it. It was a sendup of the university administrators who enacted such a policy but also underscored the absurdity that the social justice movement had managed to have codified” (p. 105). Rectenwald innocently posted a link to an article about the spoof, without comment, and returned hours later to find out that he had ignited a firestorm—with hundreds of condemnatory threads, and dozens of private messages demanding explanations and retractions. “I was accused of betrayal, discursive violence, and transphobia” (p. 105). Not long afterward, he created the Twitter account as DeplorableNYUProf, with the @antipcnyuprof handle.

This part of the story is equally fascinating and enlightening. More firestorms erupted after he turned his guns on his own. At one point, he was pressured to take a mental health leave of absence from his job, although ultimately he received a promotion. Rectenwald became a man without a country. His progressive colleagues unfriended and shunned him, but he didn’t feel at home among conservatives, populists, or even libertarians. (His Twitter rants suggest to me that most libertarians would see him as an ally. He even cites Ludwig von Mises as an influence in his rejection of decades of Marxism.)

What is to be learned from Rectenwald’s experiences?

I am particularly struck by his apostate take on social justice. He has seen it up close, been rejected by it, and hopes to expose all its sins. Social justice, he argues, is “practical postmodernism.” It has become “fanatical.” It is, at root, “authoritarian” (p. 30). After a career as a social justice warrior (SJW), he concludes” “SJW = Stalin, Just Weirder” (p. 126) and that diversity “is a code word for uniformity of thought” (p. 129). After watching a conservative commentator, he tweets “I see the right doesn’t know a fraction of the insanity of the identitarian left” (p. 131). He concludes that “social justice ideologues are the contemporary equivalents of the Pharisees” (p. 135) and explains that “today’s social justice movement does not have its roots in religious social justice movements” (p. 158) such as the Catholic Worker or Civil Rights movements. Social justice “involves nothing like justice in any true sense. It is a post-modernist appropriation of Stalinist and Maoist ideological purging, indoctrination and conformity-imposing mechanisms. It’s often brutal, vicious and cruel. No justice to see here folks. Move along” (p. 149). “‘Social justice’—the worst misnomer of the 21st century, so far” (p. 140).

If Rectenwald is correct in this conclusion, it is vitally important that scholars like those in our symposium counterbalance and reorient the discussion of both justice and society. If he is correct that the “educational system in North America is a giant SJW sausage factory” (p. 154), it is essential that this conquest of academia be challenged with firmness, insight, intelligence, tact and genuine compassion. Many social justice advocates are uncivil toward anyone who doesn’t agree with their worldview. But, this very incivility makes the world less just. Opponents can object to these excesses without copying them.