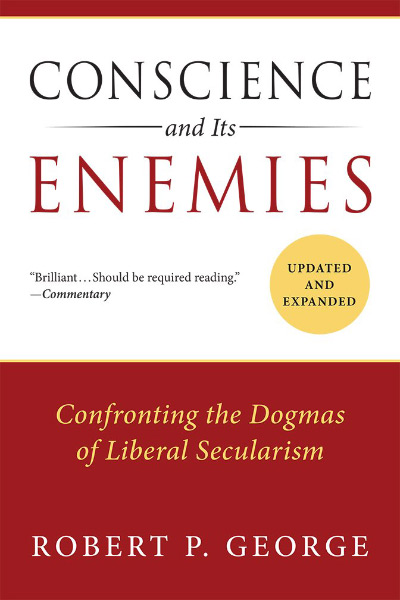 Conscience and Its Enemies
Confronting the Dogmas of Liberal Secularism
By Robert P. George
Kindle Hardcover Paperback
This book review appeared in the Fall 2015 issue of The Independent Review.

The latest book by Robert P. George, McCormick Professor of Jurisprudence at Princeton University, is a series of essays held together by natural-law reasoning. Although George is a devout Roman Catholic, he does not draw on church teachings. His methodology should interest anyone who wishes to construct reasoned arguments to place principled limits on government.

First, a disclaimer: My formal training in philosophy ended in the fourth grade, when I memorized the St. Joseph Baltimore Catechism. Any philosophical knowledge I have attained since then has been entirely self-taught.

One of George’s key chapters, “Two Views of Liberty . . . and Conscience,” lays out the analytical approach. Does freedom mean we get to do whatever we want? Does a defense of freedom rule out substantive claims about what is truly good? George answers both questions in the negative. He believes truth claims about human flourishing need not impinge on anyone’s freedom.

George illustrates the issues by contrasting John Stuart Mill with John Henry Newman. Mill and Newman were among the most distinguished and powerful intellects of the nineteenth century. Both wrote compelling defenses of freedom, but they had very different views of what freedom and hence conscience mean.

Mill articulates his understanding of freedom through his famous “harm” principle. “‘The only purpose for which power can be rightfully exercised over any member of a civilized community, against his will, is to prevent harm to others’” (qtd. on p. 107). And what is the basis of this principle? According to Mill, it is an appeal not to abstract right but to utility “in the largest sense, grounded on the permanent interests of man as a progressive being” (qtd. on p. 108).

As George notes, for this concept to do any work one has to have some notion of the “permanent interests of man as a progressive being” (p. 110). The utility principle by itself cannot provide answers. George believes Mill had “something of a tin ear for religion,” whichMill probably thought would “wither away in an age of freedom” (p. 110).

By contrast, John Henry Newman, whom George describes as a “religious genius,” gave due credit to the civilizing impact of Christianity. His view of conscience and freedom was correspondingly quite different from Mill’s. Newman believed that “[c]onscience has rights because it has duties; but in this age, with a large portion of the public, it is the very right and freedom of conscience to dispense with conscience. Conscience is a stern monitor, but in this century it has been superseded by a counterfeit, which the eighteen centuries prior to it never heard of, and could not have mistaken for it if they had. It is the right of self-will” (qtd. on p. 111).

Poor Cardinal Newman didn’t know the half of it. In our time, this concept of conscience as self-will has continued to work its way through the institutions of society. We have reached the point where sexual liberty (a concept that doubtless would never have occurred to either Newman or Mill) is in danger of routinely trumping religious liberty.

Behind Mill’s view is an optimism about human nature. Humans are naturally good and will become better if unfettered by artificial social constraints. Mill was an educated, accomplished man living in Victorian England. When he looked around at the result of centuries of civilizing influences, he thought that what he saw was man’s normal condition.

Although Mill’s view is more common today than it was in his own time, Newman’s view of the human person was probably widely shared in the Victorian era as well as in the American Founding era. No human being created himself. Therefore, the human person has a duty to his creator, a duty of gratitude and worship. But this earlier religious age believed that it would be absurd and even wicked to suppose that people have duties that they have no capacities to perform. Hence, government has a responsibility to respect the rights of religious conscience. This is why religious freedom was considered the “first freedom.”

This understanding of the conscience helps explain why religious liberty falls down the ladder of importance under the self-will view of conscience. “Freedom of religion” morphs into “freedom to worship,” just one more preference for a type of activity—a not particularly significant activity at that.

And so I revert to my formal philosophical training. The Baltimore Catechism asks: What is man?

And answers: Man is a creature composed of body and soul, made in the image and likeness of God.

Did I mention that the Baltimore Catechism ismodeled on the Summa Theologica of St. Thomas Aquinas, redone for children? It was an audacious thing to do, to try to teach Thomism to the children of working-class immigrants. But it worked. Even if one does not ultimately agree with this little definition, having it tucked away in the corners of one’s mind is extremely helpful because it steers one away from the many unsatisfactory alternatives. Man is not a bundle of passions or a utility function. Man is more than a disembodied will or a mass of electrons or a blob of cells or the sum of neurochemical impulses.

Although George never cites the Bible or any church documents and certainly not the Baltimore Catechism, he and I —as well as, I suspect, many readers of this journal—are drinking from the same well, whether we realize it or not. George’s thought goes in a direct line back to Thomas Aquinas and through him back to Aristotle. The philosophical realism of this whole line of thought protects us from the many modern fads involving philosophical idealism or fantasy ideologies.

George is part of a wider movement bringing a refreshed version of Thomism to bear on modern issues. Although he alludes to his critics within that wider movement, I am not in a position to evaluate their disputes. What I can say is that their overall project must be of the greatest importance to any advocate of minimum government and human liberty.

It is not really possible to take a position on abortion or the definition of marriage or any other serious moral issue without having some theory of the human person and what is good for human persons. George observes throughout this work that the modern claims to moral neutrality are essentially fraudulent.

For instance, in the title chapter, “Conscience and Its Enemies,” George analyzes a report prepared by the American College of Obstetricians and Gynecologists in 2008. This report recommended sharp limitations on individuals physicians’ conscience rights to refuse to perform abortions regardless of any moral objections they might hold.

George observes that the advocates of these impositions on providers are hiding behind a veil of objectivity, science, and neutrality. “What jumped off the page at me when I first read [the report] is that it is an exercise in moral philosophy—bad moral philosophy, but lay that aside for now—not medicine. It proposes a definition of conscience, something that cannot be supplied by science or medicine, then proposes to instruct its reader on ‘the limits of conscientious refusals,’ describing how claims of conscience should be weighed in the context of other values critical to the ethical practice of health care” (p. 157).

George might have added but does not that how and why the government is in the business of providing or subsidizing any “family-planning” services at all are serious moral questions. How did it get to be any of the government’s business whether Mr. and Mrs. Morse have two children or ten? This question should cry out to libertarians with historical or empirical inclinations. And that the government even considers compelling religious people to provide these services should be anathema to advocates of minimum government.

These questions in turn point to a deep incoherence in the view of conscience as self-will. If self-will is not grounded in any substantive theory of the good for man, then the “good” or the “useful” becomes an exercise in the law of the strongest.

Opponents of religion object to “comprehensive worldviews” as a basis for policy because they claim that an overbearing concept of the good for man will then be ruthlessly imposed on others. But George would respond that these very same people have a surreptitious concept of the good for themselves, which they stealthily but truly do impose on others without ever having to defend that concept. If they were required to defend their concepts, they would surely fall short, as George’s analysis of the report by the American College of Obstetrics and Gynecologists illustrates.

The real threat to freedom is not people with religious or other comprehensive and substantive views of the human person and the human good. The real threat is that some people insist that they be permitted to do what they want, including reshape the fundamental institutions of society, on the basis of “neutrality.” These people and their projects are not subjected to reasoned scrutiny but allowed to bypass serious analysis as they skulk in the guise of “neutrality.”

This is why George’s philosophical approach should be of interest to readers of this journal, regardless of their religious persuasion. The book could have been improved by a note with each chapter stating when and where the essay was first published to give the reader context for the problem being discussed. But this is a quibble. Conscience and Its Enemies will be well worth the time of any reader of The Independent Review.