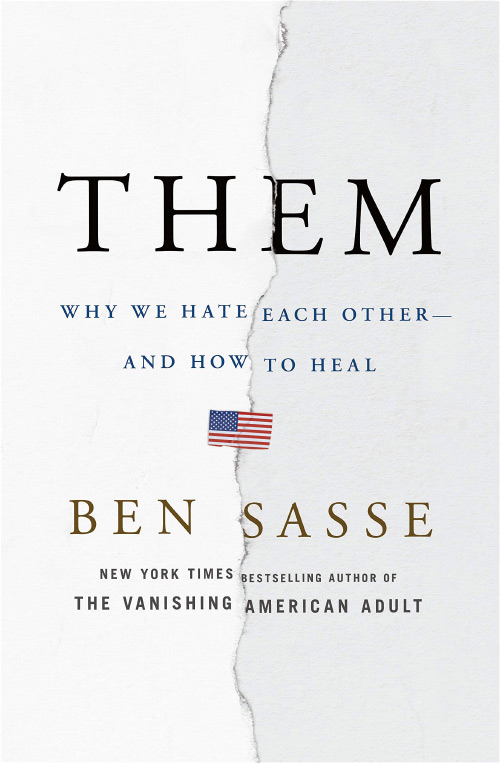 Them
Why We Hate Each Other—And How to Heal
Ben Sasse
Kindle Hardcover Paperback Audiobook Audio CD
This book review is a web exclusive for the Winter 2019/20 issue of The Independent Review.

At the heart of Them: Why We Hate Each Other—And How to Heal there is an economic argument. Ben Sasse (who has a Ph.D. in history from Yale, served as President of Midland University and currently represents Nebraska in the U.S. Senate) argues that increased political polarization in the United States is driven by recent technological changes. Technology (especially cable TV and the internet) have reduced the costs of producing news, shifting out the supply curve, pushing down the price and inducing customers to consume greater quantities, as they move down their demand curves. However, the demand curve is a marginal benefit curve, so as one moves further and further along it, the benefit from the last unit gets lower and lower. A similar set of changes has led many of us to consume more and more food, pushing us to buy cheap junk food, which is bad for our health. In the media market, many have responded the same way—by consuming junk news, which is cheap to produce, cheap to buy and bad for our health, especially our political health. (Sasse doesn’t use any of this economic language, but that’s the core of his argument. He does, however, scatter explicit economic arguments throughout the book, including a nice three-page discussion of Tomorrow 3.0: Transaction Costs and the Sharing Economy [New York: Cambridge University Press, 2018] by Michael Munger—co-editor of The Independent Review.)

Broadcast and online media has become “polititainment”—politics as entertainment—and Sasse has seen how it works in person. The “polarization business model” involves “nutpicking” (p. 106). One of the surest ways to achieve high ratings or to get someone to click on your link is to trumpet extreme statements from some nut in the opposition, advertise them as representative of everyone from the other political camp, and foment outrage. For content providers, all clicks are good clicks, because advertisers pay by the click. This boosts ratings because although Americans have become more isolated, disconnected and lonely, they still seek to belong—and belonging to one of the political factions is easy when the other guys do things that are disgusting and loathsome. People gravitate to the media on their side of the aisle and hear only outrageous things about the opposition, deepening the fissures that divide the country. Hate now pays the media’s bills, so we’re locked into an equilibrium in which hate and disunion grow. “We’re meant to be for things and people, but absent that, most of us will choose to be against things and people, together, rather than to be alone” (p. 72), as we divide into anti-tribes—tribes that are bound together by hostility toward the other side. We “soothe our lonely souls with the balm of contempt” (p. 103).

Like his first book, The Vanishing American Adult (New York, St. Martin’s Press, 2017), Them isn’t a policy book. It’s not about how the government should respond to this problem. Rather, it’s more of a self-help book—how each of us can respond to heal ourselves and one another. When Senator Sasse has pointed out the excesses of members of his own party, especially President Trump, he has been lambasted by right-of-center commentators. One media host told Sasse that he had to do so because his audience demands it. “You know how the game is played. You’re a big boy, and it’s just a game” (p. 124). How can we change the rules of this destructive game and elevate the nature of politics?

Sasse’s core advice is that we “become Americans again,” by embracing the two “indispensable insights” that have made the country strong politically, economically, and culturally in the past: “each and every individual is created with dignity—and therefore government, because it is not the source of our rights, is just a tool” (p. 138). More broadly, Sasse identifies four “core truths” about human nature and government that the Founders understood: 1) “We’re flawed—and naturally inclined to fight,” 2) “Those who wield government power shouldn’t be trusted to resolve many fights or to declare many winners and losers,” 3) “Politicians shouldn’t confused their temporary roles with ultimate meaning,” and 4) “Citizens in a republic must cultivate humility—or the experiment will inevitably collapse” (p. 139).

These ideals were passed on from generation to generation in families, schools and the broader culture until about fifty years ago.Since then we’ve witnessed the “amoralization of America.” “When one half of the nation demonizes the other half, tendrils of resentment reach out and strangle whatever charitable impulses remain in us. Eventually, this tempts even judicious people to start defending the indefensible” (p. 155), as when they hold politicians on their team to lower standards than others and cave into the impulse to call in the federal government to “fix” every problem.

The ultimate solution is to “put politics in its place”—to depoliticize our schools, culture, friendships and life in general. Most practically this might mean “fasting” from media and social media—in economic terms, simply reducing our demand for outrage and not taking the bait when it is dangled in front of us. The toxic media is a poor substitute for the things that actually make life meaningful—the things that have always made life meaningful—like family, friends (the face-to-face kind), neighbors, and cultivating our virtues together. Screaming matches are a lousy substitute for engaged conservations.