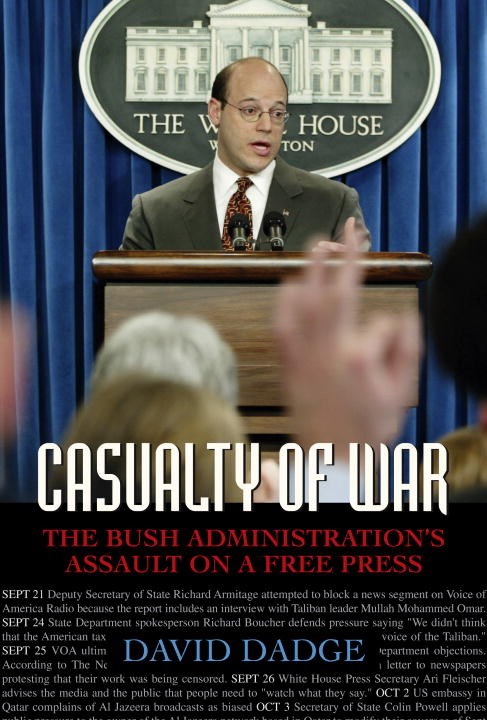 Casualty of War
The Bush Administration’s Assault on a Free Press
David Dadge
Hardcover
This book review appeared in the Winter 2004/05 issue of The Independent Review.

Casualty of War is a narrative of the obstacles and intimidations that the American press suffered after the al Qaeda attacks of September 11, 2001. David Dadge, editor at the International Press Institute in Vienna, takes a professionally partisan view. Journalists, he writes, should be “free of all constraints whether political, social or emotional” (p. 113). After 9/11, they faced many such constraints, which he names. How one takes his book, however, will depend on how one evaluates those constraints and how one evaluates the war.

Consider first the constraints. Some are of ownership, including government ownership. One story Dadge tells, occurring several years before the 9/11 attacks, involves the U.S. government’s effort to secure the release of Chinese dissident Wei Jingsheng. Part of the deal with China was that the U.S. government would not make political hay of the release. After Wei was allowed to leave China, the Voice of America (VOA) announced an interview with him in its overseas Mandarin service. The State Department tried to stop the broadcast. Dadge thinks this interference was indefensible because it turned the VOA into “the microphone of the federal government” (p. 20). But the VOA is part of the U.S. government. It is State Radio, and the government of China is not unreasonable to see it that way. Indeed, after 9/11, the U.S. government explicitly saw it that way. On February 25, 2002, President George W. Bush said, “The Voice of America is not neutral between America and America’s enemies” (p. 39).

One constraint on the private media is government moral suasion, which can be powerful in times of crisis. After the 9/11 attacks, the president’s national-security adviser, Condoleezza Rice, asked for a conference call with U.S. television network executives. She implored them not to broadcast Osama bin Laden tapes in full because his rhetoric might inflame Muslims and because the tapes might contain coded messages to al Qaeda cells. After making this request, she got off the line, leaving the media executives to discuss it. They agreed to cooperate. Dadge writes, “It was the first time in modern memory that the news networks had consulted each other on policy” (p. 81).

Another case of influence was in reaction to a statement made by comedian Bill Maher. On the Politically Incorrect television show September 17, 2001, he said that the attackers had not been “cowardly” as so many had claimed. It was more cowardly, Maher said, to be “lobbing cruise missiles from 2,000 miles away.” This comment was not one that many Americans wanted to hear. Federal Express and Sears canceled their advertising, and Maher’s show began an eight-month death spiral. In addition, the Bush administration piled on. On September 26, 2001, Ari Fleischer, White House press spokesman, said of Maher’s comment, “It’s a terrible thing to say.... [T]hey’re reminders to all Americans that they need to watch what they say, watch what they do. This is not a time for remarks like that.” Fleischer’s remark, Dadge writes, was an exhortation “for journalists to censor themselves” (p. 116).

Censorship, however, is an act of government. The commander in chief’s official mouthpiece was exhorting the media to edit itself. Fleischer was asserting that there were national-security consequences and public-morale consequences of editorial judgment and that journalists ought to think about them. In fact, such consequences may exist, and responsible owners and editors have to think of them. It is not unreasonable during a war to take a call from the national-security adviser. The news media do have to “watch what they say” during a war because media people are not, in the final analysis, neutrals. They live in the territory to be defended. Their advertisers and viewers are also not neutral. If media people act in a way that supports the enemy, they will be publicly shamed, and their employers will be hurt commercially. Dadge, however, is oblivious to these considerations. He does not put himself in any shoes other than those of a reporter who wants his circulation manager, his sponsors, his viewers, and his government to leave him alone.

The liberty of the press is about only the last of those parties. It is about political restraints. Dadge’s book deals for the most part with constraints, political and otherwise, most of which might reasonably be expected during a justifiable war. Dadge confuses constraints with restraints, however. He also assumes that the government is wrong to manage the disclosure of information about itself. Of course, that power is often abused, but in a war government will have a problem if it cannot keep certain information secret. Dadge is not interested in the government’s problems.

To take interest in the government’s view is to imply the war was legitimate. If it was not—if the conquest of Iraq and an open-ended “war on terror” did not legitimately follow from the 9/11 attacks—the analysis changes. If the wider war was not necessary, then many of the constraints on the press also were not necessary, much of its cooperation with the government was unjustified, and its professional performance was weak. Conceived in that way, the book’s subtitle, The Bush Administration’s Assault on a Free Press, might be changed to How the Press Was Intimidated during an Unnecessary War, and a different argument might be constructed.

Dadge’s book might have been better if Dadge had acknowledged that the press’s problems were in large part its own fault. Consider the terms war on terror and weapons of mass destruction. They had political definitions subject to challenge by nonexperts, but few in the press challenged them. Few challenged the ideas of “links” (a favorite weasel word) between al Qaeda and Iraq, the identification of Iraq with the person of Saddam Hussein, the presumption that weapons that had not been “accounted for” were real, and the insistence that these weapons were likely to be used against the United States. It took courage to argue with the government after the 9/11 attacks. The Maher episode outlined the risks. It did not matter that most journalists vote Democratic and will provide a megaphone for a Democrat because during much of this time Democrats were quiescent. The United States had been attacked, and the instinct was to rally behind the commander in chief. The press was subject to what Dadge calls “the gravitational pull of patriotism during times of crisis” (p. 129) and for most part yielded to it.

Dadge wants to make a case for the press against the Bush administration. Of course, Bush wanted a supportive press; every president does. The government employs people to feed the press, lead it, flatter it, and during wartime “embed” it. Such is their job. The press’s job is to keep its head. If the press cannot distinguish between a war of defense and a war of conquest, and if it cannot decipher the political justifications offered for the war, who is at fault?

With much of the same information that Dadge has admirably compiled in this book, a much stronger case might be made against the institution he defends. It was not skeptical enough of its own government; indeed, it was not nearly as skeptical as the British press was of the British government, although it has more legal protection of its liberty than the British press does. An American who wanted to follow the Iraq war intelligently had to read the foreign press, including the Web page of the new Arab broadcaster al Jazeera. The Internet made these sources available. On the Net, for example, I first saw the wide-angle photos of the pulling down of the statue of Saddam Hussein, which show that the crowd was remarkably small and that a U.S. tank provided the muscle.

Dadge’s instincts to support and defend truth telling are virtuous, but his finger is pointed for the most part at the wrong culprit. Dadge wants to say to the Bush administration that it managed war in a way that assaulted the freedom of the press. Most of the “assaults,” however, amount to the things that the press may reasonably expect from a government at war. The finger ought instead to be pointed at the government for unnecessarily going to war (rather than engaging in a police action) and at the news media for accepting the government’s rationale for the war. “Journalists faced intense pressure from an alliance of groups within American society that included politicians, corporate sponsors, the public, the conservative media, and even publishers and media executives” (p. 125), Dadge writes. Well, yes. And to a disappointing degree, they gave in.

The First Amendment does not protect the American media from social pressure, business pressure, or government jawboning. It is the press’s job to listen to what it is being told, to seek other sources, and to judge for itself. The real problem was not that the press was verbally “attacked.” The problem was its response.