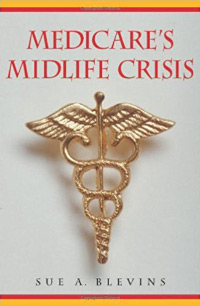 This valuable book draws together key aspects of the Medicare story seldom combined in a single volume. Sue Blevins (R.N., M.P.H., M.S.), president of the Institute for Health Freedom, describes Medicare’s key characteristics, analyzes its consequences for current and future retirees, outlines the program’s historical evolution, and formulates an agenda for reform. Medicare’s “midlife crisis” includes, among other things, the inexorable rise in Medicare spending, the beneficiaries’ ever-rising out-of-pocket medical costs, the reduction in the number of taxpaying workers per Medicare beneficiary because of the retirement of the “baby-boom” generation, the threat to medical privacy associated with efforts to reduce Medicare fraud, and Medicare’s impending bankruptcy. Blevins’s concern is what needs to be done to remedy that midlife crisis.

At one level, the book is a primer on what Medicare does to retirees, explaining the program’s fundamentals in clear and sometimes dramatic ways. It opens with the true story of a man who, nearing age sixty-five, went to sign up for his Social Security benefits with the intention of declining Medicare Part A (hospital insurance) coverage. Although he had paid Medicare taxes throughout his working life, he wanted to decline Medicare Part A benefits in order to retain more control over his medical care and health records. Through this man’s experience, Blevins exposes the little-known fact that the federal government now confiscates the Social Security benefits of anyone who declines Medicare Part A coverage, in effect making that coverage mandatory and thus eliminating meaningful choice in hospital insurance for all but the wealthiest retirees. Blevins also explains the other parts of Medicare, including Part B’s supplemental medical insurance and Part C’s Medicare + Choice program, along with the different funding sources involved. Traditionally unspoken truths—that Medicare does not provide coverage for catastrophic medical expenses, that retirees have no legally binding contractual right to their Medicare benefits, and that Medicare is compulsory rather than voluntary—are starkly set forth.

Blevins then examines the early historical context that set the stage for Medicare, focusing on efforts between the late 1800s and the 1950s to institutionalize compulsory national health insurance both around the world and in the United States. She explains Medicare’s eventual acceptance as an outgrowth not only of the expanding international adoption of national health care programs, but also of the Great Depression and of prominent U.S. studies that increasingly supported such a federal role. Most extensively discussed is the American experience beginning with the Socialist Party’s first advocacy of national health insurance in 1904. Blevins describes the key roles played by the American Association for Labor Legislation (AALL), the Committee on the Costs of Medical Care (CCMC), and the FDR-created Committee on Economic Security in pushing America toward some form of national health insurance. She identifies as pivotal to the incremental approach ultimately taken the 1952 decision by President Truman’s Commission on the Health Needs of the Nation to recommend narrowing the focus and seeking prepaid health benefits only for Social Security recipients.

Key chapters then trace the events surrounding the 1965 enactment of Medicare. Refuting the myth that seniors had no way to pay for their medical care in the pre-Medicare 1960s, Blevins describes the 1960 Medical Assistance for the Aged (Kerr-Mills) program that made federal tax dollars available to help states provide medical assistance for the aged poor. She argues that no crisis involving seniors’ access to health care existed prior to Medicare, that in fact health insurance was spreading among retirees, and that even those who were uninsured had access to health care services by other means.

One of the striking aspects of the passage of Medicare was federal officials’ use of legislative “tying” maneuvers to get the measure passed. For instance, the Medicare package was made a part of the 1965 Social Security amendments, which also contained a 7 percent increase in Social Security benefits, making it difficult for legislators to vote against the measure regardless of their views about Medicare. The other form of tying originated in Representative Wilbur Mills’s decision, as chairman of the House Ways and Means Committee, to tie the three then-competing health care bills together in one package, creating the three-part system (dubbed the “three-layer cake”) that we know today as Medicare Part A, Medicare Part B, and Medicaid.

Although the basic outlines of the three-layer-cake story are familiar to specialists in this area, Blevins makes an important contribution as a result of her examination of internal White House documents stored in the Lyndon Baines Johnson Library. Using previously unpublicized White House memos, she shows that long-standing claims that President Johnson did not know of Representative Mills’s plan to combine these three bills were false, indeed that Johnson knew of Mills’s plan more than a year in advance. This point is critical because it confirms the deliberateness of the political strategies involved. Medicare’s Midlife Crisis also documents the extent to which key government officials systematically ignored warnings about the likely future costs of Medicare and deliberately understated those expected costs to the public. Blevins describes the unfortunate aftermath, reflected in a Medicare system whose spending is now unsustainable in the long run.

The author then analyzes how Medicare actually affects seniors. She argues that the program has not achieved its original goals and that its impact on today’s seniors is deleterious. She contends that neither the increases in seniors’ life expectancy nor the reduction in seniors’ poverty that occurred after Medicare was enacted can be attributed to Medicare because both trends were in place long before Medicare began. Moreover, although Medicare’s supporters aimed to reduce the out-of-pocket medical expenses of seniors, that reduction has not been achieved: instead, those expenses have risen dramatically. Blevins identifies the restrictions on seniors’ choices that Medicare has created and the encroachments on privacy that are implicit in federal monitoring of the quality of Medicare recipients’ home health care and in broader federal moves toward a national health-information system.

This volume provides a useful reference for general readers and medical professionals. Its greatest strength is in combining, in a highly readable and concise volume, practical information about how Medicare works and insightful analysis of Medicare’s history, consequences, and possible reform. Its weaknesses are chiefly organizational, including a sometimes disconcerting tendency to repeat facts previously discussed. Medicare’s Midlife Crisis is intended primarily for those not acquainted with how Medicare actually works and how it originated. I would strongly recommend it to a friend who wanted to inform himself quickly about the Medicare issue.

This book is not about political or economic theory; it is about Medicare’s history, administration, and practical effects. Its great virtue is blending the historical with the current, the political dynamics with the actual effects of Medicare. As such, Medicare’s Midlife Crisis will appeal to a wide spectrum of readers.