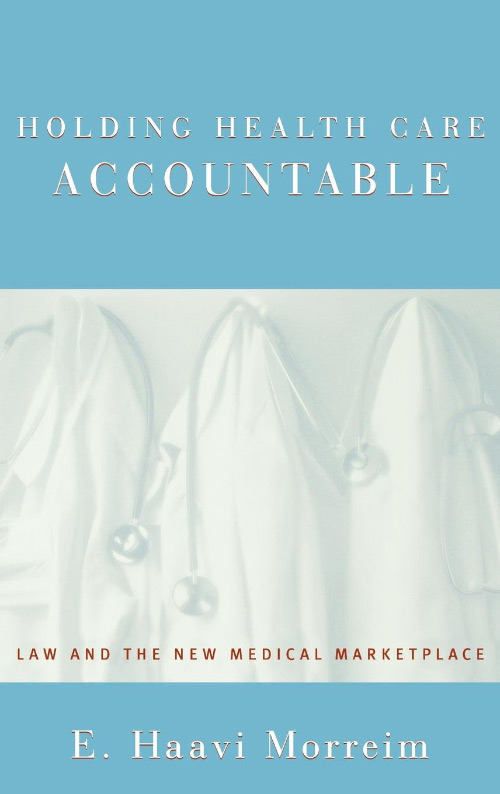 The practice of medicine makes a fundamental distinction between diagnosis and treatment. Unless the former is done, the latter cannot be accomplished. Even if the former is accomplished, the latter may still go awry, either because the condition is untreatable or because the physician has chosen the wrong treatment. What is true of the care provided to individual patients is true of the health care system as a whole. Everyone agrees that today’s health care system as a whole is subject to profound ailments, but there is much disagreement about the nature of the underlying malady and about the nature of the cure. The potential pitfalls are many. Some people are troubled by the unequal access to medical resources, which they view as a symptom of a larger form of social injustice. Others are concerned with the impersonal care that is often provided by various forms of managed- or medical-care organizations (MCOs). Still others, including Haavi Morreim, are concerned about the allocation of liability (if any) among the various participants who are responsible for the provision of health care: the physicians who provide the care; the hospitals that supply the facilities; and the insurers and MCOs that administer the plans that determine whether certain conditions or treatments are covered under the policies they provide for their patients.

In dealing with these issues in her book Holding Health Care Accountable, Morreim shows a comprehensive grasp of the subject and a good eye for those results that should raise eyebrows. She does a nice job, for example, in recounting the story of an unfortunate health-maintenance organization (HMO) that was held liable for its refusal to cover an autologous bone marrow transplant for a woman whose breast cancer had spread to her bone marrow (see Fox v. HealthNet, Cal. Super, 1993, at 41). The jury was so unimpressed with the HMO’s contention that the treatment was experimental and therefore excluded under its contract that it awarded the plaintiff $89 million (including $77 million in punitive damages) for her pains. The immediate query is why other plan subscribers should be required to foot the bill for such outlandish verdicts, even if the HMO had been as guilty as sin. The story does not get any better when it is noted that subsequent research proved that the proposed treatment was indeed worthless, after more than $3 billion had been spent on it by HMOs that did not want to run into the same legal buzz saw. Morreim correctly argues that private provision of medical services will grind to a halt if the liability rules for HMOs start to resemble those for tobacco companies. A zealous reformer might think that tort liability should drive tobacco companies out of business, but HMOs?

Clearly something is amiss, and something should be done. But what? Morreim advances a set of sensible but modest proposals that she believes will nudge the tort liability system toward greater rationality. Consistent with much of her previous work, she maintains strongly that physicians cannot be required to perform miracles when they are forced to work with primitive equipment in outmoded facilities. She accordingly holds that the malpractice law should always demand that physicians exhibit the appropriate level of expertise, but only relative to the resource base that the political and economic system provides them.

I have serious doubts about how far incremental reforms of this sort will take us. Our root problem with medical liability is that no one seems to be able to articulate in the abstract the standard of care that physicians have to observe, so elusive is the line between honest and reasonable mistakes, on the one hand, and culpable negligence, on the other. By the same token, there is a growing tendency today—to which Morreim should pay more attention—to adopt various patients’ rights bills that hold MCOs liable for their failure to exercise “ordinary care” in deciding whether to extend cover to particular cases. Morreim’s welcome skepticism about these new extensions of liability rests on an unfortunate Aristotelian essentialism to the effect that each participant in the health care process should be held responsible only for the matters that fall within its respective purview—as if that grand question had only a single right answer. “Under such a division of responsibility, liability should be assigned only for those aspects of care that the physician or the health plan could and should have controlled” (p. 9).

That formulation unfortunately already captures much of the current legal position, for few plaintiff’s lawyers would be so foolhardy as to assert that particular defendants are being held responsible for matters outside their expertise. Rather, they claim that the defendant either has mishandled the areas within its chosen expertise or has purported to go beyond that expertise. Nothing is more common than allegations that HMOs that deny coverage have overridden medical judgments that physicians have made in the best interests of their patients.

Morreim cannot erect an abstract set of boundaries to patrol this treacherous turf successfully. I myself continue to urge on a wary populace the position that I have taken for more than a quarter century (Richard A. Epstein, “Medical Malpractice: The Case for Contract,” American Bar Foundation Research Journal 87 [1976]: 87–119). In my view, it is a mistake to treat liability for medical mishaps as though it were a subject of tort law—that is, as a subject for direct judicial or legislative regulation. All the parties to the health care relationship stand in some consensual arrangement with each other, either through direct contact or through intermediates. The only way that incidents such as the bone marrow transplant misadventure will be avoided is for courts and legislatures to respect and to enforce all contracts among all players in the health care systems, subject only to the standard contractual defenses of duress, fraud, and incompetence, which should not be expanded for this occasion. It is a form of the fatal conceit against which F. A. Hayek warned so powerfully to believe that we can engineer from without the optimal set of liability rules for an industry that is always in the midst of dizzying technical innovation and political change. Market forces have worked to back employers and health care providers away from bare-bones capitation plans that limit patient choice of physician. If necessary, those same pressures can be brought to bear to determine who should be liable for what, for whom, and where (court or arbitration). It may well be that Morreim’s prescriptions are the best we can do, but we shall never find out unless we allow them to be adopted from below. The moment that we insist on imposing some preconceived set of liability rules on the provision of medical services, we risk not only a steady succession of complex and unwanted law suits, but also the kind of systematic blunder found in the bone marrow transplant case. No one can claim that markets for health care are perfect, in light of the evident difficulties in communicating information to patients and in evaluating outcomes, but no system of regulation can eliminate these risks, either. Morreim should have argued only that her rules make sense for the parties who participate in such arrangements. Her effort to render unto Caesar only what falls in Caesar’s domain is likely to bring no more peace to the provision of medical services than it has brought to the Middle East.

Richard A. Epstein
University of Chicago Law School
Health and HealthcareHealth InsuranceHealth Savings AccountsLaw and LibertyLitigationMedicare and MedicaidRegulation
Subscribe Buy This Issue Get the App