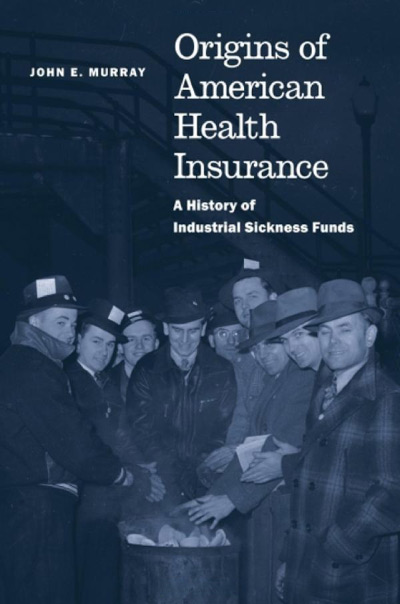 Origins of American Health Insurance
A History of Industrial Sickness Funds
John Murray
Hardcover
This book review appeared in the Fall 2009 issue of The Independent Review.

The standard answer to this question is that a combination of special-interest groups that included labor unions, big business, organized medicine, and the insurance industry defeated proposals for government insurance. Because this unholy alliance stood to lose from government-provided health insurance, its members organized to defeat and suppress the will of the electorate. In this standard story, the typical voter wanted some sort of government insurance because the existing modes of providing for workers in times of illness consisted of a patchwork of disorganized, underfunded, and largely ineffective industry- and union-backed sickness funds.

As Murray points out, though, the traditional story line has a number of problems, not the least of which is the fact that whenever government-provided insurance programs were put on referendum ballots, they were resoundingly defeated. Murray’s primary area of focus, however, is not politics but economics. In particular, he analyzes the efficiency and effectiveness of privately provided sickness funds. For the people enrolled in them, sickness funds gave financial support to the afflicted worker and the worker’s family. Although Murray is not the first scholar to consider the efficacy of these funds, he is among the first to consider them using the tools of modern economics, which leads him to radically different conclusions. His careful econometric and statistical analyses show that privately provided sickness funds worked reasonably well and protected a broad swath of the industrial labor force.

One of the book’s most admirable and compelling aspects is the respectful way Murray treats those with whom he disagrees. In this way, Origins of American Health Insurance is a model of balance and thoroughness. Unlike much of the literature on the Progressive Era and universal health care, Murray’s book actually takes seriously the ideas and arguments of all participants, whether they comport with his ideological priors or not. If you want a balanced treatment of Progressive Era politics, this book is a great place to start. Murray also writes very well, weaving historical narrative, econometric analysis, and economic theory together into a coherent argument. I was particularly impressed with the way he uses labor mobility to explain the concept of tax incidence and then builds on this explanation to highlight the hidden costs of universal health care.

When Progressive Era reformers pointed to the inadequacies of the U.S. health insurance system, they presented a multifaceted indictment. They claimed that sickness funds were miserly and covered only a tiny fraction of the labor force. Evaluating this charge, Murray argues that sickness funds indeed were very frugal. Such funds were designed to keep workers out of the poor house and off the dole, “nothing more, nothing less.” Stinginess in the early 1900s probably made a great deal of sense. Aside from administering diphtheria antitoxin, physicians could do very little for their patients except to recommend bed rest and a healthy diet. So why spend much money on physicians, as in some European countries, when such care was not efficacious? This being said, sickness funds in the United States typically replaced about 60 percent of wages lost to illness—a higher replacement rate than observed in insurance funds sponsored by European governments.

As to the charge that only a handful of workers were covered by sickness funds, Murray argues that this charge is based on faulty data and reasoning. After scouring industry, state, and federal sources, he concludes that sickness funds covered about one-third of the labor force—a higher proportion of the labor force than was covered by government programs in Belgium (13 percent) or France (30 percent). He argues further that the two-thirds of the U.S. labor force who were not covered by sickness funds chose not to be covered because they were engaging in precautionary savings outside the fund or because they were relatively young and healthy. Both direct and indirect evidence supports this contention. Drawing from the work of Price Fishback and Shawn Kantor, Murray explains that workers compensation laws reduced precautionary savings in the early twentieth century. He also uses data from a large sample of Michigan workers to show that wealth, savings, home ownership (a proxy for illiquidity), and age were strong predictors of whether a worker chose to enroll in a sickness fund or not. This evidence undermines claims by Progressive Era reformers that workers in the early twentieth century lived scarcely above the subsistence level and could not engage in precautionary savings.

As today, reformers in the early twentieth century pointed to European-style health insurance programs as models that U.S. policymakers should follow. Reformers argued that in contrast to U.S. sickness funds, European programs were actuarially sound and avoided many of the moral-hazard and adverse-selection problems that plagued voluntary funds in the United States. Murray demonstrates, however, that there was no free lunch for workers, governments, or employers. When governments imposed taxes on employers and employees to pay for these programs, wages adjusted accordingly. He also shows that European programs were not the paragons of efficiency that reformers claimed they were. On the contrary, voluntary funds in Europe were plagued by adverse selection (only the sickest, most needy workers joined), and mandatory, universal funds encountered serious moral-hazard problems. Employees feigned illness, and physicians shaded their diagnoses according to who was paying the bill: the employee or the government. Because U.S. funds were privately run, they were highly sensitive to costs and created incentives so that the ill returned more quickly to work.

Book reviewers often conclude with a brief list of things they thought could have been done better or with a set of questions that have gone unaddressed. Other than to say I would like to see a second volume that brings the story up to the current time, there is not much here to criticize. I liked even the little things, such as the quotations that open every chapter. Such epigraphs are typically little more than window dressing. Here, though, they also tell us something substantive about the arguments to come and the broader historical landscape. Particularly relevant is the quotation from Alexis de Tocqueville that opens the first chapter: “A government could take the place of some of the greatest American associations, and within the Union several particular states already have attempted it. But what political power would ever be in a state to suffice for the innumerable multitude of small undertakings that American citizens execute every day with the aid of an association” (p. 3).

Much like Tocqueville, Murray appreciates the wisdom and power of small groups and voluntary associations that operate on a shoestring. Whether you share these sympathies or not, Murray’s book is simply the best, most balanced, and most thorough treatment of the topic available. I cannot recommend it more highly or with any greater enthusiasm. Origins of American Health Insurance is simultaneously a lesson in economics and a lesson in history.