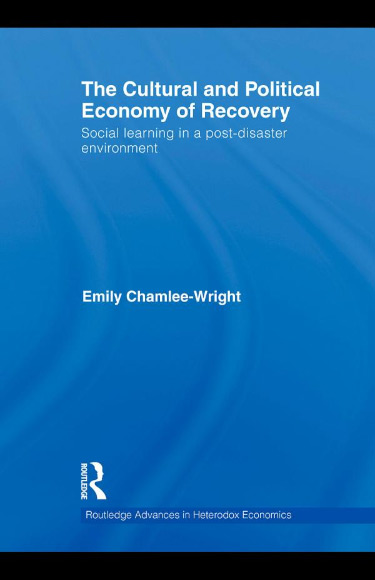 The Cultural and Political Economy of Recovery
Social Learning in a Post-Disaster Environment
Emily Chamlee-Wright
eTextbook Hardcover Paperback
This book review appeared in the Spring 2011 issue of The Independent Review.

Despite our increasing familiarity with devastating storms—the ten costliest hurricanes in U.S. history have occurred since 1989—Katrina transcends the pack. A Category 4 hurricane on the water and a Category 3 when it struck land on August 29, 2005, Katrina caused the most insured damage in U.S. history and was one of the deadliest hurricanes ever to strike U.S. shores. Even today, more than five years after the storm, many communities continue to struggle with its aftermath. Emily Chamlee-Wright’s The Political and Cultural Economy of Recovery provides an account of the experiences of residents from several New Orleans communities trying to recover from Katrina. Chamlee-Wright, who was a member of the Mercatus Center’s Crisis and Response in the Wake of Hurricane Katrina project, provides an analysis of why one community successfully recovers from a major disaster and another does not. She uses information from the three hundred interviews of New Orleans residents performed by members of the Mercatus Center during the three years after Katrina to convey the experiences of survivors and to explain the keys to a successful recovery.

Chapter 1, in which the author extols the benefits of laissez-faire policy, is familiar territory, but it is nicely done, and for the uninitiated it will provide an excellent introduction to the Austrian school’s recognition of the important discovery role of markets. In chapter 3, the author provides examples of how in Katrina’s aftermath private firms and individuals outperformed government. For example, the speedy return of large chain stores, such as Home Depot and Lowes, was important because the 40 percent of the population who did not have flood insurance did their own work. The successful “strategy of mutual assistance” that community leaders, businesses, and individuals carried out contrasts with the top-down approach of government agencies such as the Urban Land Institute (ULI) and the Bring New Orleans Back Commission (BNOB). Mayor Ray Nagan set up the BNOB in the weeks following the storm, and the ULI was the BNOB’s principal consultant. Whereas community activists such as Father Vien Nguyen organized crews to start rebuilding, government created uncertainty and road blocks. For example, the BNOB told communities in a November report that a community would have to be rebuilt in its entirety, not in a piecemeal fashion.

In chapters 4, 5, and 6, Chamlee-Wright provides field studies of how three communities with different ethnic and cultural backgrounds responded in Katrina’s aftermath. The first is a Vietnamese community near the Mary Queen of Vietnam Catholic Church (MQVC) in New Orleans East. Composed of immigrants, many of whom arrived in New Orleans in 1975, this group presents a success story that illustrates the importance of community action and “socially embedded resources.” Although the BNOB suggested in a November report (two months after Katrina) that “significant study” was needed before any rebuilding, and the ULI recommended that the area be turned into open space, within weeks of Katrina, MQVC residents were returning and beginning to rebuild. Within one year, three thousand people had returned to the community, and in two years 90 percent of the community’s residents had returned. A charismatic leader, Father Vien, who began to hold church services shortly after Katrina, provided key leadership by “signaling” to the community that rebuilding would proceed. The author characterizes the community’s view as “we have all been through worse and shall overcome this hardship” (p. 73, emphasis in original). (How many could say that?) Many of these people had already overcome great hardships, fleeing twice from Communist expansion in Vietnam (an experience that prepared them well for Katrina, it turns out). The MQVN example indicates how cultural tools and a historical narrative can create a cohesive, confident, and resilient community.

The second community—St. Bernard Parish, a predominantly working-class community in the southeast part of Orleans Parish—experienced mixed success following Katrina. The author explains that the successes have been attributable to cultural tools similar to those employed in MQVN, including an independent streak that led to action without and sometimes in opposition to government direction. Doris Voiter, for example, took decisive action to get the St. Bernard Public School District started quickly, despite the roadblocks that the Federal Emergency Management Agency created. Voiter, the superintendent of the school system, turned to private donors, and with the support of the community she was able to resume classes quickly.

The Upper and Lower NinthWard, the third community studied intensively, is a relatively poor, predominantly African American group that struggled with recovery more than most communities. Although many community members had a “sense of place” and believed that “God has a plan” (p. 119), the community lacked the direction to undertake meaningful rebuilding. Only 11 percent of the pre-Katrina population had returned to the Lower Ninth Ward by June 2008 (p. 113), notwithstanding the ecofriendly homes that Brad Pitt’s Make It Right organization built there.

Chamlee-Wright’s telling of this story clearly indicates that fewer government obstacles would have benefited communities, but a nagging question remains as to whether fewer roadblocks would have been a sufficient condition for communities such as the Ninth Ward to succeed. Chamlee-Wright illustrates that the top-down approach taken by government agencies such as BNOB and ULI, no matter how well meaning, will be less successful than local community action. Because there is no one best solution to rebuilding after a disaster, community action creates the greatest likelihood of successful reconstruction through the process of discovery and innovation. Government too often blocks positive action by rigidly adhering to regulations. The author documents how “regime uncertainty”—a concept Robert Higgs (Depression, War, and Cold War: Studies in Political Economy [New York: Oxford University Press, 2006]) uses to explain how the government slowed recovery during the Great Depression by undermining public confidence in the stability of private-property rights—is a major barrier to recovery. In one example, the city government created a catch-22 for returning residents. City officials would not allow repairs to public schools and municipal infrastructure until a clear redevelopment plan was in place. However, families could not return to the community without schools and infrastructure, and the families’ absence was used to justify the city’s confiscation of their property. The government-created uncertainty stifled entrepreneurial activity and made it difficult for the residents to return. Another problem is that government sets aside private-property rights and does not adhere to the rule of law, which causes entrepreneurs and investors to be unwilling to participate in recovery, thus slowing growth.

Throughout the book, Chamlee-Wright provides many examples of government roadblocks that hampered the recovery of much of New Orleans. Therefore, a key question is, What role should government play in recovery from a disaster? In chapter 7, the author offers four de facto answers to this question (p. 131): government relief should be scaled back as quickly as possible to allow markets to work; the rebuilding process should be decentralized (that is, allow bottom-up decision making); “regime uncertainty” should be avoided so that private agents’ creative energies will be engaged in the rebuilding; and an advance alternative regulatory regime should be created in order to reduce uncertainty.

My quibbles with The Political and Cultural Economy of Recovery are relatively minor and do not detract from my favorable overall impression. I found the halfdozen figures scattered through the text to be of little value and a little distracting, although perhaps better explanation of them would have helped. I would have found the addition of some area maps and some quantitative analysis to be useful. Left unexplored is the contribution of government policies, such as subsidized property insurance and government-built levees, to overdevelopment of high-hazard areas. Much of New Orleans is below sea level, and as Katrina demonstrated, sections of the city should be developed only if property owners accept the risk and bear the cost. An update of how the redevelopment is progressing would be of interest, especially in light of the BP oil spill, which only increases this study’s value and relevance.

Chamlee-Wright provides an interesting and informative narrative, discusses numerous events that will be unfamiliar to many, and examines the barriers to successful recovery. Although government failure is a familiar theme, this unique study provides valuable lessons in how communities can best respond to a disaster. It is difficult to imagine a series of events that would lead to another outcome as disastrous as that created by Katrina, but understanding the value of “socially embedded resources” as well as individuals and communities’ ability to rebuild when not obstructed by government is a lesson applicable in many situations.