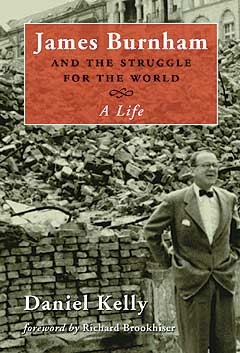 James Burnham and the Struggle for the World
A Life
Daniel Kelly
Hardcover
This book review appeared in the Summer 2003 issue of The Independent Review.

Daniel Kelly’s James Burnham and the Struggle for the World is a very useful study of his subject’s life, contributions, and intellectual trajectory over a long career as a writer and public intellectual.

James Burnham was born in Chicago in 1905 to a Protestant father and a Catholic mother. He finished his secondary schooling at Canterbury School in New Milford, Connecticut, and in 1923 entered Princeton University, where he majored in English. He also took French, Latin, Greek, and all the available philosophy courses. As an undergraduate, Burnham regarded himself as a follower of T. S. Eliot. Graduating at the top of his class, he earned a second B.A. at Balliol College, Oxford, in 1929. Strangely enough, he studied Old English under J. R. R. Tolkien.

On his return to the United States, Burnham coedited the journal Symposium with Philip E. Wheelwright, his former philosophy teacher at Princeton, and taught philosophy at New York University (NYU). At NYU, Burnham fell under the influence of Sidney Hook, who was busily grafting John Dewey’s philosophy onto Marxism—a doctrinal blend with all the charms of a coral snake crossed with a rattler. Thus, from 1932 or so, Burnham took up Marxism, gravitating to the Trotskyist movement. From this vantage point, he characterized the New Deal as “fascist”—a judgment Kelly seems to find eccentric—and became the faculty adviser to the Young Communist League at NYU.

Kelly follows Burnham through the ins and outs of sundry Trotskyist splinter groups and sketches Burnham’s relationships with Joe Cannon, Max Schachtman, and Leon Trotsky. Burnham’s literary efforts continued, and he edited the New International with Schachtman. He wrote against the New Deal and, of course, against Stalinism. Kelly notes the tone of “finality” in these essays: throughout his career, Burnham always posed as a hardheaded analyst of inevitable trends.

In 1934, Burnham married Marcia Lightner, also a midwesterner, and in 1936 a daughter was born to them. They acquired a farmhouse as their permanent home. Also in 1936, Hook and Burnham founded the Marxist Quarterly. By 1937, Burnham had adopted the theory that Soviet socialism was actually a form of “bureaucratic collectivism.” Through the late 1930s, he sought to build an American Marxism. Expressing his modernist sensibility, he began writing for Partisan Review. He was developing heretical views, writing that dialectics was only metaphor. In 1940, he fell out with Trotsky over the latter’s defense of the Soviet Union and not long afterward dropped out of the Trotskyist movement.

Kelly writes, “It is tempting to write off Burnham’s Trotskyist phase as wasted time, a six-year detour into the sterile world of left-wing sects. But this judgment would be wrong” because “the involvement prepared him for what would be his real career” (pp. 87–88). In 1940, Burnham’s first major work appeared and sold well. Called The Managerial Revolution, it showed the influence of Machajski, Rizzi, Berle, Means, Veblen, Thurman Arnold, and Lawrence Dennis, as well as of Trotskyism (pp. 95–96). Burnham argued that bureaucratic management was the wave of the future, even if it took such forms as fascism, communism, and the New Deal, depending on circumstances. Only a cold, empirical, social-scientific approach could tell us where we were headed.

After Pearl Harbor, Burnham, who had opposed U.S. entry into the world war, became a dedicated war leftist. His 1943 book, The Machiavellians, sought to ground the study of politics on the empiricism of Machiavelli, Pareto, Mosca, and Michels. As in The Managerial Revolution, his view in this book was that great impersonal forces were driving history along. Increasingly concerned about Soviet power, Burnham wrote The Struggle for the World in 1947, in which he called for an “American empire” with “decisive world control” and a “European Federation” under U.S. auspices. The English-speaking powers and the Eurofederation “would become a Toynbeean ‘Universal State,’ with the United States in the role of the peripheral, semibarbarian, unifying power.” This could be sugar-coated as “the policy of democratic world order” (qtd. on pp. 125–26). Much political will would be needed in this struggle.

Kelly notes the “ire of isolationists” against Burnham’s book (p. 131). He mentions that Burnham was working at this time with Alfred Kohlberg, “an importer of Chinese textiles [!]” (p. 133). Kelly is being coy here: Kohlberg was the main operator of the famous China Lobby (see Ross Y. Koen, The China Lobby in American Politics [New York: Harper and Row, 1974]). Burnham’s The Coming Defeat of Communism (1949) demanded even more political will, along with better propaganda. The United States should support Muslims in the USSR (p. 141) and launch “political-subversive warfare” (“polwar”). As for American business, it was “too cowardly” in relation to the Cold War (p. 144).

Burnham soon resigned from NYU and joined the Central Intelligence Agency (CIA) to help carry out political-subversive war. He took a leading role in the Congress for Cultural Freedom, a CIA-sponsored anti-Stalinist front made up of former Trotskyists, former communists, socialists, and New Deal liberals, including such worthies as Sidney Hook, Arthur Schlesinger Jr., John Dewey, Karl Jaspers, Max Eastman, Melvin Lasky, and Jacques Maritain. His open enthusiasm for bombing the Soviets provoked a bad reaction from the pinker anti-Stalinists (and rightly so).

Somewhat predictably, in Containment or Liberation (1953), Burnham called for more American will. He specifically wanted “winged soldiers, air cavalry, able to raid two thousand miles behind the lines tonight and be gone before the defense arrives tomorrow, ready to liberate a Siberian slave labor district this week, spearhead a revolt in the Caucasus the next, and blow up an enemy powerhouse over the weekend” (qtd. on p. 176). Incredibly, Kelly speculates that had Burnham’s suggestions been taken up, “the Soviet collapse might have come much sooner than it did” (p. 179). Burnham was consulted on the toppling of Mosaddeq in Iran, but in April 1953 he was ousted by CIA liberals for being too right wing—under the emerging redefinition of that term. His Web of Subversion (1954) added to his “McCarthyite” credentials. His Cold War liberal friends deserted him.

Based on a piece Burnham wrote in 1955, Kelly says that his subject sometimes displayed “libertarianism à outrance” (p. 206). Yet Burnham opposed laissez-faire and favored the Tennessee Valley Authority (p. 207). Thus, he must have kept his “libertarianism” under severe restraints. Kelly is on stronger ground when he writes that Burnham’s outlook “foreshadowed neoconservatism of the 1970s” (p. 208).

Burnham wrote occasionally for The Freeman, a magazine editorially torn between so-called isolationists and the new Cold Warriors. In Burnham’s mind, the free market was “a far less urgent matter”(p. 209) than most of The Freeman staff considered it to be. Thus, he was ready when William F. Buckley Jr., another writer with CIA connections, set up the National Review.

The new magazine’s editors and writers were an odd collection of Cold Warriors (many of them former leftists), new conservatives, and libertarians who had embraced the Cold War. Burnham’s regular column, “The Third World War,” focused naturally enough on foreign affairs. Burnham waged the High Cold War from the beginnings of the National Review in 1955 until his retirement in 1978. His pragmatic drift toward the political mainstream sometimes caused trouble with his colleagues at the Review. He always favored Nelson Rockefeller as the ideal Republican Party candidate and was favorably impressed with Henry Kissinger and Robert McNamara. Kelly’s discussion of his subject’s views on the Middle East—oil and Israel—seems a bit thin, and in discussing National Review views on desegregation he whistles past the graveyard very quickly.

For slightly more than two decades, Burnham concerned himself with cultural conflict and Cold War strategy, occasionally surprising his colleagues, as with his suggestion—triggered by the Hungarian Revolution in 1956—that the United States and the USSR should negotiate withdrawal from Europe—that is, Austrianization.

Over the course of his career, Burnham had worried from time to time about Bonapartism, Caesarism, and bureaucracy, and he developed these themes in Congress and the American Tradition (1959). Kelly raises an obvious question: “How did he think the need to wage the Cold War, indispensable to Western survival, could be reconciled with the need to stem the growth of Caesarism, a phenomenon he attributed partly to twentieth-century wars, both hot and cold?” (p. 242).

Burnham was not distracted for long, however, and soon he was complaining that America’s European allies were growing effete and cared too little about “empires, crusades, colonies, liberations, wars in distant places, justice for others [!], dim future threats” (qtd. on p. 258). In the 1960s and 1970s, he also commented on Cuba, European withdrawal from Africa, the U.S. space program, and the Vietnam War. His attacks on libertarians are given about a page, less than Kelly gives to his defense of Rhodesia (pp. 309–11).

Based on this corpus of work, one might begin to think that there were two James Burnhams. His Suicide of the West (1964), shorn of Cold War material, wears very well and is full of insights about the “verbalist” classes, liberal guilt, and related themes. But he could also deliver advice of a questionable kind—for example, this advice on how to win in Vietnam: “biological and chemical weapons should be used. North Vietnam’s rice crop could be wiped out, while an ‘incapacitating gas’ might prove ideal for ridding South Vietnamese villages of Vietcong infiltrators, since the latter could be seized without risk to friendly locals. Nuclear devices also could be put to use, e.g., cobalt dust to create a radioactive barrier between the two Vietnams... . To permit irrational taboos to block the use of such weapons was unpardonable” (qtd. on p. 313). Absent the will (my term, not Kelly’s) to commit such war crimes, a “staggering defeat” loomed (p. 315).

As the United States withdrew from Vietnam, Burnham wanted the U.S. government to threaten that Hanoi and Haiphong would be “immediately and totally atomized” if massive reprisals took place against Vietnamese who had fought the communists (p. 337). With the coming of détente, he even wrote that Americans needed a replacement for Cold War! One wonders why.

Kelly offers much more in this interesting biography—accounts of Burnham’s travels, private life, hobbies, and last years—but we must draw some conclusions.

Early in the story, Kelly quotes Matthew Josephson on how Burnham the Trotskyist would wax enthusiastic about “vast bloodbaths that would attend the overthrow of our society” (p. 36). It would seem that Burnham simply transferred this apocalyptic vision to his views on foreign policy. This move seems to undercut, more than a little, Kelly’s notion that Burnham had an “Augustinian sensibility” all his life.

Burnham’s books do have interesting and important insights—especially The Managerial Revolution, Congress and the American Tradition, and Suicide of the West—but the Cold Warrior Burnham constantly undermined the conservative Burnham (if conservative is the right word). He embraced empire, constant frontier wars, managerialist determinism, and the warfare state, while complaining occasionally about Caesarism, the decline of Congress and other intermediate institutions, the growth of federal bureaucracy, and the loss of traditional liberties. This circle could not be squared. Burnham seldom considered that anything other than big impersonal historical forces might be causing the things he bewailed, that actual human agents might be driving some of the seeming inexorabilities. As a result, his rather willful disregard of economic theory and his battles against “doctrinaires” such as Frank Meyer look like symptoms of a larger failure of vision.

Kelly seems to believe that reconciling the right-wing movement to pragmatism and big government was Burnham’s signal contribution. Burnham was constantly calling for Americans to conjure up will. Now that we have “conservative” leadership with far more will than brains, the struggle of the next decades will be to summon up some won’t.