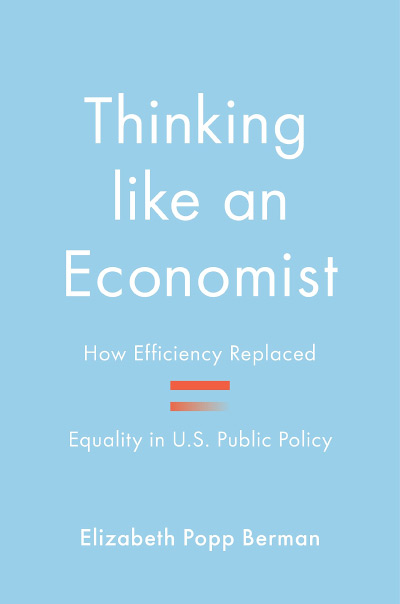 Thinking Like an Economist
How Efficiency Replaced Equality in U.S. Public Policy
By Elizabeth Popp Berman
Kindle Hardcover Audiobook
This book review is a web exclusive for the Fall 2022 issue of The Independent Review.

Elizabeth Popp Berman’s book, despite its title, is first and foremost a progressive manifesto. Progressives (e.g., Bernie Sanders, Elizabeth Warren and Alexandra Ocasio-Cortez) and supporters of the Liberal World Order will gleefully devour her book. Those who find merit in thinking like an economist will suffer indigestion.

So, what exactly does it mean to think like an economist? In what seems to be a revival of Marxian polylogism, Berman identifies two major “styles of reasoning” (sets of value judgements and related logic) that currently dominate the American political landscape: “the economic style of reasoning” which emphasizes “efficiency, incentives, choice and competition [belief in the market]” and the competing style “grounded in the values of rights, universalism, equity and limiting corporate power” (p. 4). I will call this latter style of reasoning the progressive style. (For a discussion and critique of polylogism see Ludwig von Mises, 1949, Human Action, New Haven: Yale University Press.)

The chief obstacle to achieving more progressive policies is, in Berman’s view, the economic style of reasoning. She advocates for the progressive style “grounded in different values and ways of thinking” (p. 19). She makes it clear what she sees as the primary reason U.S. public policy is not to her liking: too many people think like economists.

Berman argues that the economic style of reasoning has infected both Democrat and Republican policymakers but has mostly affected Democrats for the worse. Democrat acceptance of the economic style of reasoning has made it difficult for different values and ways of thinking and “undermining some of the Democrats’ most effective language—of universalism, rights and equality” (p. 19).

In her introductory chapter, Berman expresses her hope that the Biden administration will accommodate the resurgent progressive left in breaking with the constraints imposed by the economic way of thinking. “Bernie Sanders, Elizabeth Warren and Alexandra Ocasio-Cortez” will hopefully be joined by “a range of experts and activists including economists not committed to the economic style” (p. 22). Her optimism is tempered by her concern that “fascist and antidemocratic movements [Republicans?] threaten to upend—and perhaps destroy—not only the current political order [Democrat-party control of the government?], but democracy itself” (p. 22).

Chapters 2 through 9 offer a grand tour of how the economic style came to dominate government agencies, think tanks, law schools, many university departments and both political parties. Berman details the shift from the progressive style (e.g., New Deal and the Great Society) to the economic style and how this affected market governance, social regulation, and the Democratic left. A separate chapter is given to the economic style in the Reagan administration (considered a deviation from the economic style because of its goal to reduce the welfare state).

The history of the rapid rise of the economic style to dominate is an important story. Berman, a sociologist at the University of Michigan, does an admirable job naming names and detailing the spread of the economic style. Anyone interested in this history from the 1950s to the present will find this part of her book an enjoyable read. I had a special interest having known several key players from my stints at the Hoover Institution and Federal Trade Commission in the late 70s and 80s.

I learned from many of her vignettes: the difference between the economic styles in industrial organization at Harvard and Chicago, the important roles played by Rand and Brookings, the evolution of the Federal Trade Commission, Alice Rivlin’s reformation of the Congressional Budget Office into a bastion for economists, the influence of educators such as Aaron Director in spreading the economic style, and how the Planning-Programming-Budgeting System (PPBS) got the economic style rolling.

While Berman does an admirable job in explaining how the economic style rose to prominence, she is much less interested in explaining why. I address this in my concluding remarks.

In the concluding chapter, Berman notes that Presidents Carter, Clinton and Obama all were handicapped and restrained by the economic style of reasoning. During their administrations, the economic style had infiltrated government agencies, law schools, graduate programs in public administration and policy much to the detriment of the progressive agenda.

Berman sees two solutions to the political obstacle imposed by the economic style: change it or reject it. The economic style can and has been changed by improving understandings of costs and benefits, for example. But Berman is not sanguine about its ultimate success. Her tales about progressive defeats in such things as antitrust and environmental regulation “suggest caution about how successful such strategies [changing the economic style] are likely to be” (p. 219). Finally, “When our values align with those in economics, we should embrace the many useful tools it has to offer. But when they conflict, we much [sic] be willing to advocate—without apology—for alternatives, rather than allowing our values to be defined by the values of economics” (p. 232).

Berman makes a major contribution to understanding the progressive mind and contrasting it to the economic style. Unfortunately, in so doing, she reveals why the country is more divided than ever.

Berman does offer some specific policies which are presumably compatible with the progressive style: universal free health care, baby bonds (to address the racial wealth gap), the Green New Deal, and student debt cancellation. I would have appreciated a discussion on how each of these is a right, satisfies universalism, and serves equity.

To progressives, efficiency and cost-benefit analyses are dirty words when they conflict with their values. It becomes clearer how campaigns to “save the world” and “save the snail darter”—regardless of their costs—make perfect sense.

Berman explains how the economic style spread rapidly but says little about why. I will offer a simple explanation borrowing from Winston Churchill. The economic style is the worst style of reasoning except for all the others.

Countries that emphasize the progressive style are the world’s poorest. In 1970, the People’s Republic of China was impoverished. It was able to raise hundreds of millions of its citizens out of poverty when it adopted the economic style by allowing markets and unequal incomes. Will China expand use of the economic style? Will the progressive style continue its ascendency in the United States? Stay tuned.

Burton A. Abrams
University of Delaware
Economic PolicyEconomistsEconomyPhilosophy and ReligionSocialism, Communism, and Collectivism
Subscribe Buy This Issue Get the App