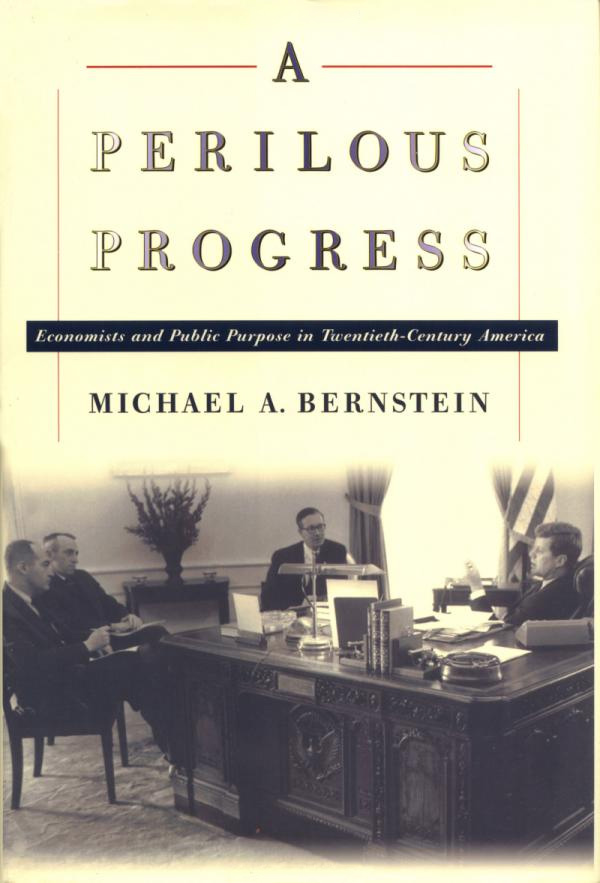 A Perilous Progress
Economists and Public Purpose in Twentieth-Century America
By Michael A. Bernstein
Kindle Hardcover Paperback
This book review appeared in the Fall 2003 issue of The Independent Review.

In A Perilous Progress, Michael Bernstein reminds us of the importance of the Progressive era in setting the stage for the twentieth-century history of government in the United States. Progressive intellectuals preached the scientific management of American society, as orchestrated by the federal government. The federal managers of society would be part of a new “meritocratic order—a network of new social relationships premised on educational achievement, professional accomplishment, and adherence to ethical codes of conduct” (p. 12). Professional groups, such as economists, would be the vital repositories for expert knowledge and would provide the specialist personnel to guide the modern state. As Bernstein comments, the “American century” was “first and foremost, an era of professional accomplishment and perquisites” (p. 13).

Progressivism, as Samuel Hays once characterized it, was a “gospel of efficiency” (see Samuel P. Hays, Conservation and the Gospel of Efficiency: The Progressive Conservation Movement, 1890–1920 [Cambridge, Mass.: Harvard University Press, 1959]). If age-old conflicts over material resources could be abolished by means of the enormous productivity of a modern economic system, the prospect lay in store for the arrival of a new heaven on earth. Because the path to earthly salvation would follow an economic route, the most important of the professional groups would have to be economists. Indeed, as Bernstein argues, by the end of the twentieth century, economics had emerged as the “preeminent academic discipline,” resulting in “the displacement of almost all other social scientists in significant and influential political and bureaucratic positions” (p. 3).

If Bernstein is correct, the actions of American economists are of basic interest to the political history of the United States. The story of economics becomes much more than an account of the successes or failures of twenty thousand modern academics. Rather, as Bernstein argues, “the agendas and methodologies of contemporary economists speak directly to the manner in which Americans go about their daily affairs, [and] understand the world around them. . . . Rethinking the history of the American economics profession is . . . very much tied up with rethinking the history of modern American culture itself” (p. 3).

A number of books cover the creation of the American Economic Association in 1885 and the formative years during the Progressive era (see, for example, Benjamin G. Rader, The Academic Mind and Reform: The Influence of Richard T. Ely in American Life [Lexington: University Press of Kentucky, 1966], and Dorothy Ross, The Origins of American Social Science [New York: Cambridge University Press, 1991]). Bernstein’s book, however, is the first to survey the full history of American economics over the course of the twentieth century. Bernstein is a professor of history, but he also has a Ph.D. in economics. In the end, however, he approaches his task more as a historian than as an economist. Indeed, most economists are remarkably unreflective about the history of their own profession. To the extent that they study the past at all, it is the history of economic ideas or the history of economic events—and even these fields have lost favor in graduate curricula in recent decades. Bernstein’s approach, by contrast, situates the actions of professional economists as major influences on the political and economic events of twentieth-century America.

Many of the main themes Bernstein develops are not themselves new. Under the banner of Progressive ideas, especially the ideas of economists, the times of greatest advance in government power were periods of war (compare Robert Higgs, Crisis and Leviathan: Critical Episodes in the Growth of American Government [New York: Oxford University Press, 1987]). Economists not only benefited from this growth of government but worked actively to promote and justify it. As Bernstein finds, “having desired and cultivated public influence and authority for a century or more, mainstream American economists had seen their wish requited in the statism born of World War II and the cold war” (p. 161). Economists first clearly demonstrated their public importance by coming to Washington in large numbers in order to help in overseeing the vast output of armaments and other supplies that was the greatest U.S. contribution to the Allied victory in World War II.

Bernstein sees the golden age of economics as occurring from 1950 to 1970. With the creation of the Council of Economic Advisors (CEA) in 1946, economists became the only professional body with a legal guarantee of access to the president’s ear. This growing influence reflected the rise of Keynesianism and the view that economic knowledge could be used effectively to manipulate the levers of the U.S. economy for the purposes of society, including the maintenance of full employment. The heyday of professional economics came during the Kennedy administration, when Walter Heller was chairman of the CEA, and his fellow members were James Tobin and Kermit Gordon (the latter soon to become president of the Brookings Institution).

Heller strongly advocated the tax cut of 1964, and American economists received much of the credit for having engineered the boom years that followed. As Bernstein writes, the seeming success of the “New Economics” proved to be “intoxicating” for many economists and fostered a deep “faith and self-esteem” in the scientific qualities of their economic models (p. 138). The introduction of the “Planning, Programming, and Budgeting System” in the mid-1960s was intended to do for specific government programs what Keynesian methods were doing for macroeconomic policy. If economists now fully understood the “laws” of the U.S. economy, the management of economic affairs would soon be on a par with putting a man on the moon.

The 1970s, of course, revealed the severe limits of mainstream economic knowledge. Economists had great difficulty in explaining how economic stagnation and inflation could occur simultaneously (“stagflation”). Within economics, Robert Lucas and other rational-expectations theorists were undercutting the intellectual foundations of Keynesianism. As Bernstein writes, the gross failures of economic prediction and the intensifying quarrels within economics brought a sense of “mortification” within the profession, the beginning of an era of “growing ineffectuality” that has lasted to the present (p. 163).

Although Bernstein fiercely attacks the social scientific claims that underlay the Progressive foundations of the welfare and regulatory state, he is no libertarian. Indeed, he sees the rise of the Chicago school of economics not as a scientific advance, but as a distressing symptom of economic uncertainties and professional confusions that came to the fore in the 1970s. Led by Chicago, he says, professional economists embarked on a “headlong retreat from the statecraft that had been their special birthright” (p. 194). They “demobilized their expertise and pursued an increasingly privatized and introverted agenda.” In the process, the profession “failed the polity from which it once drew its strength” (p. 194).

At this point, A Perilous Progress is at its weakest. Although Bernstein’s rhetorical style is far removed from Chicago, the founder of the Chicago school, Frank Knight, would have found much with which to agree in this book. Bernstein, however, is dismissive of Chicago. One is led to wonder, If a big government of scientific managers is undesirable, and yet the market is also undesirable, what system does Bernstein have in mind? He never tells us in this book; perhaps he has little idea himself.

For many readers, Bernstein’s most surprising conclusion will be the great importance that he assigns to the economics profession in the political and economic affairs of twentieth-century America. Economists are not accustomed to thinking of their own role in such grand terms. Indeed, among economists who have worked in government, a common reaction is a sensation of relative powerlessness in the face of interest-group, ideological, and other pressures (see Erwin C. Hargrove and Samuel A. Morley, eds., The President and the Council of Economic Advisers: Interviews with CEA Chairmen [Boulder, Colo.: Westview, 1984]). The differing conclusions may reflect different criteria for judgment. If the measure is the degree of actual scientific management of American society, based on economic “science,” the economics profession obviously has failed. Similarly, if the goal is the adoption of “optimal” economic policies in specific program areas of government, economists seldom have succeeded. Few dams, for example, were ever cancelled because of the negative conclusion of an economic cost/benefit study.

Bernstein, however, is applying a standard that would not occur to most economists. For him, the critical issue is the following: Have economists supplied the broader ideology of the welfare and regulatory state—that is, the intellectual basis of social legitimacy for its actions? He concludes that the economics profession has been a great success in this respect. The promises of economists (as well as of other professionals in lesser roles) that government could be “scientific” justified the state-building exercises of the twentieth century. Absent such assurances, the American public might well have seen the rise of big government as a menace. Only a government genuinely based on “objective science” could guard against abuses of its formidable powers for widespread private gain.

Bernstein is saying in effect that economics has been the religion of the welfare and regulatory state. One does not judge the historic importance of Christianity by the degree of actual adherence to specific biblical messages such as “do unto others as one would do unto oneself.” Similarly, one should not judge economics by whether government administrators actually follow the prescriptions of economic analyses. Rather, both Christianity and economics established the broader framework of thought by which the central events of the world are understood and judged.

Bernstein occasionally hints that the role of economics may indeed have been religious in character. He writes of contemporary economic analysis as a modern form of “scholastic discourse” (p. 194). The free market is wielded as a “canonical device” in the hands of policy analysts (p. 180). Advocates of the market assign it “the status of a natural law.” For true progressive believers, the advance of economics has meant that “scientific rigor and objectivity . . . at long last triumphed over sectarian posturing” (p. 187). The acceleration of economic progress in the modern age, based in major part on expert knowledge provided by economists, has been the decisive step in reaching “a new era of understanding, comity, and peace” on earth (p. 188).

Whether economics is literally a religion can be debated; I happen to think it is (see two of my books: Reaching for Heaven on Earth: The Theological Meaning of Economics [Lanham, Md.: Rowman and Littlefield, 1991], and Economics as Religion: From Samuelson to Chicago and Beyond [University Park: Penn State University Press, 2001]). Bernstein is certainly right, however, to emphasize the critical role of the economics profession in providing a moral basis for deciding the legitimacy of the institutions of society. As a modern “priesthood,” economists were engaged for much of the twentieth century in delivering the most important value judgments in American life—whether a proposed action was “efficient,” whether it served to advance the cause of “economic progress.” That is to say, they enforced the commands of a modern god who works his ways in the world through economic methods. On the whole, as his voice was heard during the twentieth century, this economic god apparently favored a large U.S. government.

Robert H. Nelson
University of Maryland
American HistoryEconomic History and DevelopmentEconomistsEconomyLaw and LibertyPhilosophy and Religion
Subscribe Buy This Issue Get the App