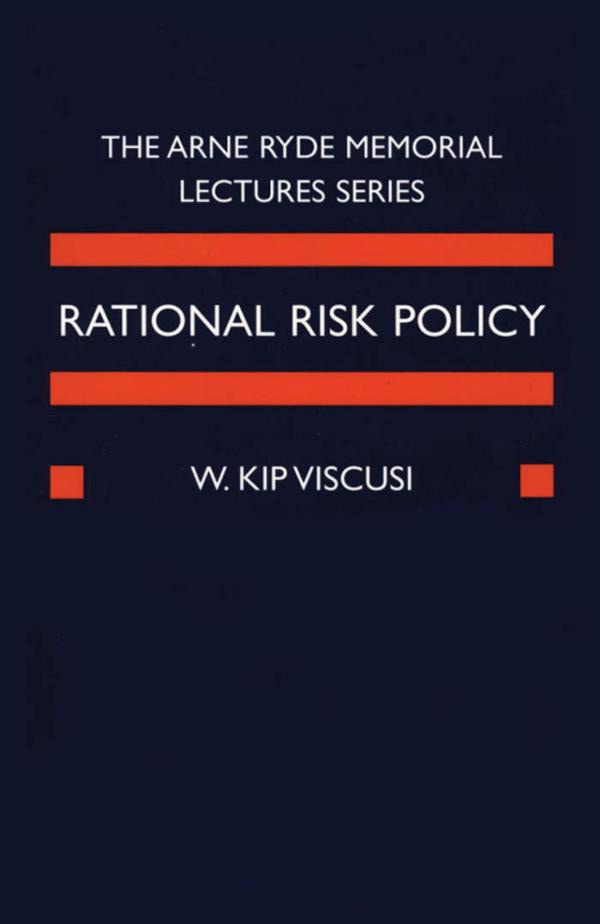 Most Americans have probably heard or read about regulations whose costs far exceed any discernible, or even optimistically predicted, benefits. W. Kip Viscusi’s Rational Risk Policy is a compilation of lectures given by the author at Lund University in Sweden during 1996, most of which shed light on the elusive benefits that regulation advocates promise but regulation often fails to deliver.

Viscusi is well known as a leading academic writer in the field of risk assessment, and the book is aimed squarely at academics. It is not easy to read, but it is well worth the effort. Some of Viscusi’s previous books along similar lines are Risk By Choice: Regulating Health and Safety in the Workplace (Cambridge, Mass.: Harvard University Press, 1983); (with Wesley A. Magat) Learning about Risk: Consumer and Worker Responses to Hazard Information (Cambridge, Mass.: Harvard University Press, 1987); and Fatal Tradeoffs: Public and Private Responsibilities for Risk (New York: Oxford University Press, 1992). He has even produced a tome on the risky choice to smoke cigarettes, should readers wish to absorb the risk tables for that activity. But his larger points about risk and policy, no matter how communicated, are well worth the effort required to understand them.

Viscusi begins the Lund lectures by explaining that people tend to place too much emphasis on small risks and not enough on larger ones. Thus, they are terrified by traces of insecticide on their food, even though they stand little chance of being harmed, but they tend to ignore or take for granted some much greater dangers. This attitude, Viscusi claims, leads to the overestimation of highly publicized risks, which creates “not only the potential for alarmist public responses to risk, but also possible pressures on government behavior, particularly when these risks are novel” (p. 24).

Viscusi deals with a world in which one chance in millions governs policy responses, even though no one can really comprehend risk that small. Nonetheless, as technology makes it possible to measure substances in parts per trillion, alarm will not lag far behind when the public learns that various “poisons” are present in food, water, or air. What is appropriate social policy for such a world? How can people be reassured by policy when, each day, very scientific-looking and -sounding individuals attempt to scare them to death? After all, the information sources on which most people rely are precisely the ones most likely to get this type of risk story partially, or in many cases wholly, wrong. I refer, of course, to the popular media, in which hysteria and fear figure far more prominently than calm, rational analysis. For the regulators, of course, any measurable risk serves as an opportunity to justify their activities and expand their domain.

For example, Viscusi considers the case of pesticides on food in California. The measured risk of getting cancer from eating food so treated is less than that of being struck by an asteroid. The regulators, exhibiting their usual good judgment and restraint, decided that food labels ought to say “Warning: The State of California has determined that this product causes cancer.” Such warnings are useless, because knowledgeable people will ignore them, and people who take them to heart will eat other, probably less healthy, foods. Generating this sort of inflated fear, regardless of arguments about the “public goods” aspect of information, is not rational public policy by any reasonable standard. It is premeditated, taxpayer-funded, government-propagated misinformation. The recent asteroid hysteria sprang from one more false alarm in a growing list of nonsensical warnings by which taxpayers are terrorized so that future tax exactions for “protecting” the public will encounter less political resistance.

Viscusi is aware of the many problems of risk assessment, such as valuing human life, assessing the meaning of “statistical lives saved,” and trying to answer what are, in truth, unanswerable questions, including: What would future generations want us to spend to improve the environment? Why do we value different life differently, as in “Save the kids first”? Does it matter where or how people are saved, or are lives saved always equal, regardless of context?

Anyone working on or debating public policy issues who argues as if all these, and many other vexatious questions touched on by Viscusi, have clear, logical, and popular answers, all of which just happen to dovetail nicely with his own ideology, is engaged not in rational policy debate but in self-deception. But that realization does not let Viscusi off the hook. No procedure, no black-box methodology, no deus ex machina can answer these questions for us. As I have argued elsewhere at length (The Myth of Scientific Public Policy [New Brunswick, N.J.: Transaction, 1990]), risk studies and benefit-cost studies are infused with normative (i.e., value) content, and your values and mine may differ. The weakness of using neoclassical economic theory to drive policy is that practitioners have convinced one another, as well as a good slice of the affected public, that they are doing something like science when, in fact, they are collecting data and funneling it not only through their a priori market models but also through their explicit and implicit ethical assumptions.

As Viscusi amply and clearly demonstrates, risk reduction, as policy choice, is a complicated business. The average person, especially after being subjected to a lifetime of regulatory propaganda, believes in simple regulatory solutions. But as H. L. Mencken observed, for every human problem there is always a neat, simple solution that is, at the same time, just plain wrong. Regulation fails in part because it induces behavioral changes. For example, if cars are made safer through regulation, drivers will drive less carefully, thus offsetting at least some of the protection for themselves and increasing the risks to others, such as pedestrians, bicyclists, and motorcyclists. Parents leave medicine bottles with hard-to-open childproof safety caps open more often, thus allowing more child poisonings. Making cigarette lighters safer by including a mechanism to stop children from lighting them produces a moral hazard by rendering parents less concerned when the kids do lay hands on them, thus negating the prediction of their risk-lowering (pp. 70-72).

Another effect that confounds the regulatory reduction of risk is the trade-off of wealth and risk. Regulation is not free: workers earn less, consumers pay higher prices, and everybody bears a higher tax burden. Yet the wealthier a society is, the longer its citizens live. Making people poorer in the name of protecting them in order to lengthen their lives becomes somewhat problematic. In fact, a large increase in national product will do more to save lives than almost any regulation passed in recent decades. Viscusi also shows that implementing the regulations often increases risks. In a particularly provocative analysis (pp. 82-83), he argues that any cost above $35.7 million per statistical life saved is too much. Viscusi deserves credit not just for raising tough questions but for attempting to supply answers by means of theoretical and empirical analysis.

Of course, the value of those answers depends crucially on the validity of his methodology. Unfortunately, the arguments can never be settled by appeals solely to Viscusi’s or any other standard theories and risk-benefit techniques. Viscusi seems to think that his answers are pure science, as opposed to the answers given by others. He writes: “In effect, policy makers mix policy advocacy with science and do not report the underlying scientific information to enable decision makers to make different judgments” (p. 88). In my experience, this description paints a very benign portrait of how risk policy is actually planned, carried out, and justified. Viscusi’s lament is a variant of the perennial cry by some in Washington that “if only we always carried out benefit-cost analysis, we would get cheaper, better laws and regulations.” It sounds wonderful, but it is as much a political dead end as the slogan “Make government run like a business.” It isn’t and it won’t. When candidates say such things, do they understand just how foolish their pronouncements are?

Viscusi puts the costs of saving lives by various interventions (not necessarily discussing whether the interventions really do save lives) in an informative table (p. 98). From it, we learn that the potential saving of a single life by means of OSHA’s current formaldehyde-exposure standard is $72 billion, by means of the same agency’s ethylene dibromide standard a mere $15.6 billion! These numbers are truly staggering, lending support to Viscusi’s claims that current risk assessment is far too conservative and therefore that much of the regulation now in place is basically irrational. The conclusion rests, of course, on attempts to value human life that already exists (or may exist) in dollars. Although this matter is open to argument, I agree with Viscusi that few would support such enormous expenditures for so little protection. That we routinely endure such bad bargains suggests a short-circuit of the regulatory process at both the executive and the legislative levels. These outcomes exemplify what Edith Efron called “regulatory science,” the very advocacy process that Viscusi condemns. It is hard, however, to see exactly what can be done to correct these perverse outcomes short of turning policy over to a completely disinterested panel of economists with efficiency eyeshades and very sharp pencils.

Although Viscusi provides a wealth of data and much sound understanding about what is wrong with our current regulatory approach to risk, along with many examples, such as Ford’s cost-benefit decision for producing the Pinto (which would have gone the other way had Ford simply used Viscusi’s methodology), he unfortunately provides no politically or legally workable solution for this problem, which currently plagues the American economy and every firm trying to do business in it. Viscusi might regard my judgment as too harsh. If so, I ask him to realize that the regulatory situation has deteriorated to the point that no cost-benefit study will ever trump the emotional approach to regulation embodied in such monstrosities as the Americans with Disabilities Act. One can only hope that my outlook is too pessimistic.