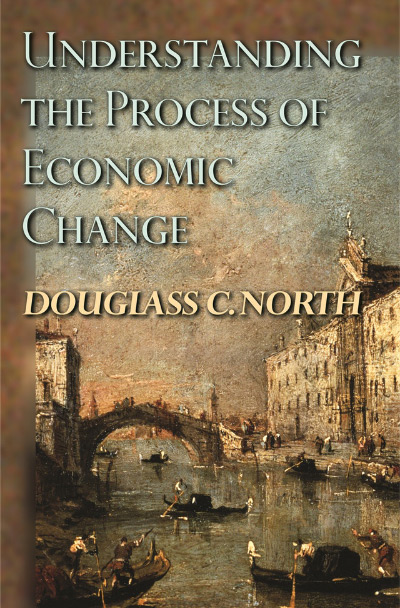 Understanding the Process of Economic Change
By Douglass C. North
Kindle Hardcover Paperback
This book review appeared in the Fall 2006 issue of The Independent Review.

The new institutional economics is the research program whose representatives claim that institutions are crucial for explaining the economic performance of both firms and entire countries. It has been a huge success over the past two decades. Even countries that share almost identical histories, that have similar resource endowments and disease environments, that are subject to identical geographical conditions, and that hence are subject to the same climate may experience very different economic performances. Take the two Germanys between the end of World War II and 1990 as an example: almost nobody questions that the differences in their institutions explain most of the differences in their economic performance.

Until fairly recently, mainstream economics was devoid of discussions of institutions. Douglass C. North can rightly be considered as one of the economists responsible for having changed that situation. His books Structure and Change in Economic History (New York: Norton, 1981) and Institutions, Institutional Change, and Economic Performance (New York: Cambridge University Press, 1990) proved to be highly significant for the success of the research program. These books synthesized the existing knowledge in an accessible way and with an enthralling style, and they advanced bold hypotheses. Whereas the first book remained largely in line with the neoclassical paradigm, the second may be considered North’s break from that paradigm. Focusing solely on these two books, however, is insufficient to explain the decisive role North has played in making the new institutional economics such a success story. Additional factors include the work of the productive group of scholars at Washington University in St. Louis, North’s appealing public speaking, and the formation of the International Society for New Institutional Economics.

Hopes that North’s new book Understanding the Process of Economic Change will also be an instant success are therefore not unfounded. In the preface, the Nobel laureate makes clear that he is entirely convinced of his new oeuvre, writing that “[t]his study is an extension—a very substantial extension—of the new institutional economics” (p. vii). The question that North deals with here is simple, straightforward, and basic. As the book’s title indicates, he aims at understanding the process of economic change, which he describes as “for the most part a deliberate process shaped by the perceptions of the actors about the consequences of their actions”

(p. viii). Throughout, North stresses the involved actors’ intentionality. Although he seems to have come closer to evolutionary views of the world, he dismisses Darwinian evolutionary theory—and much of evolutionary game theory—because intentionality does not have a systematic place in these approaches.

The book’s main conjecture can probably be best described backwards: at the end of a number of steps, the political and economic outcomes may be observed. These outcomes are the result of the behavior of a number of relevant actors. Their incentives are structured by the prevailing institutions, which, in North’s understanding, consist of formal rules, informal norms, and their enforcement characteristics. Institutions themselves, however, are not exogenously given; they are created by humans who act intentionally. North argues that institutions are created based on the relevant actors’ beliefs. If the results of the institutions people create are not as expected, people will update their beliefs—they will learn —and institutional change will continue endlessly. To understand the process of institutional change, then, one must understand how beliefs come into being, receive updating, and form the basis of human action. Such understanding is North’s current goal.

The question is completely straightforward. Formal rules that are enforced by the state can be radically changed overnight. Informal norms are, however, not subject to deliberate change. It has been argued that societies’ growth and development prospects depend largely on these informal norms. If formal and informal rules deviate too much from each other, a set of seemingly perfect formal rules may not do much good because human interactions will be structured by the informal rules rather than by the formal ones. In this case, it is essential to understand the forces that lead to the emergence—and change—of informal rules.

North tries to deal with the question by delving into cognitive science. To understand how beliefs are formed and how humans learn, he asserts, we must first understand better how our brains work. Thus, he enters territory where, owing to the academic division of labor, economists are amateurs. However, rather than seriously engaging the relevant issues, he barely scratches the surface. Far from familiarizing the reader with the relevant issues by a thorough survey of recent discussions in cognitive science, he barely mentions two or three competing standpoints and then ends the chapter.

It is interesting to see how close North comes to F. A. Hayek. At the beginning of the 1950s, Hayek felt the need to publish a truly scholarly book to prove that he was still a serious scholar. Therefore, he produced a treatise he had begun to write as a student in the 1920s—namely, The Sensory Order: An Inquiry into the Foundations of Theoretical Psychology (Chicago: University of Chicago Press, 1952). In that book, Hayek developed a number of hypotheses about how the brain works and how external sensations are structured in ways such that the experiencing being can make sense of them. Although North makes frequent references to Hayek, his own excursion into cognitive science remains largely unsatisfactory.

This outcome is unfortunately the case for most of the book. To be sure, in the introduction to part 2, North acknowledges that he has produced more an agenda for future research than he has carried out that research himself (p. 85). Although reading a research agenda can also be exciting, North’s book does not produce this effect on the reader for a number of reasons.

Asking many questions is usually seen as an indication of curiosity. Identifying pressing questions, relating them to bits and pieces of available knowledge, structuring them meaningfully—all are worthy tasks that can make for exciting reading. Here, however, many questions are simply repeated time and again. This repetition begins with the preface and an introduction to the first part. The first “real” chapter of the book contains many questions again. Chapter 6 summarizes the first part of the book and repeats many questions. The second part also begins with an introduction and finishes with an outlook. In both places, the same questions reappear.

Asking questions may be interpreted as acknowledging our ignorance. Curiously, however, in North’s case this apparent acknowledgment is coupled with a firm conviction of knowing how to get to the answers: phrases such as “the key to understanding is x” appear dozens of times in the book. I would have appreciated reading less often what the key to answering the questions is and instead reading more often what the actual answers are, even if they are only tentative and speculative.

Although North repeats many questions, he does not ask all pressing questions explicitly. Just one example reveals this problem. Institutions are collective phenomena. An individual rule (“I have coffee every day at 4:30”) does not qualify as an institution. Beliefs are individual phenomena, and updating beliefs—learning—is an individual experience. Institutional change seen as a consequence of changing beliefs thus has to deal with an aggregation problem: How are individual beliefs transformed into modified institutions? North refers to the relevant actors a number of times, but he neither explains the criteria that make them relevant nor delves into the processes responsible for the transformation of the relevant actors’ beliefs into institutional change.

In sum, at the outset of my reading of this book, I hoped to find further substantial progress in the new institutional economics. While reading it, however, I realized that it lacked the rigor of the same author’s previous books in this field of research. Instead of offering intriguing new arguments, North repeats questions without offering any real answers.