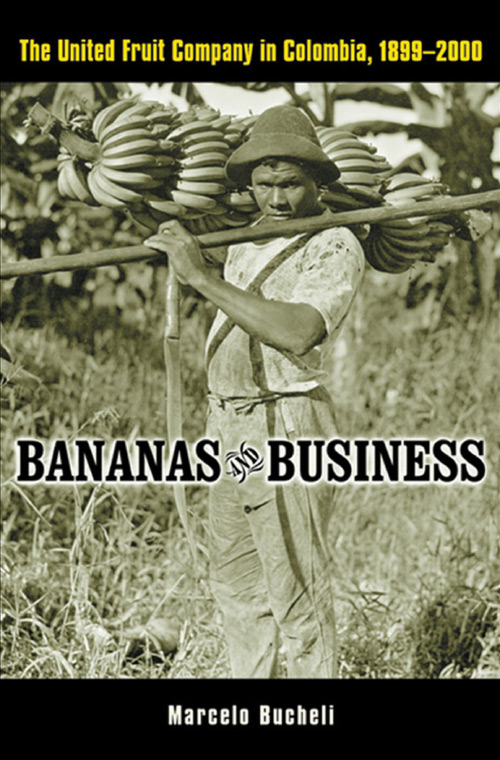 Bananas and Business
The United Fruit Company in Colombia, 1899–2000
Marcelo Bucheli
Kindle Hardcover
This book review appeared in the Winter 2005/06 issue of The Independent Review.

For more than one hundred years, the United Fruit Company (UFCO) has been for many politicians, activists, and historians the clearest paradigm of an overwhelmingly powerful corporation, a true symbol of “American imperialism.” It has been portrayed a ruthless exploiter politically involved in the fate of several Central American and Caribbean countries. For example, an extensive literature blames it for the overthrow of the Guatemalan government in 1954, after President Jacobo Arbenz expropriated a huge chunk of land that the company had acquired several years earlier through questionable means.

Several works based on more complete information have challenged the standard portrayal of UFCO, however, revealing a more balanced and complex history. Marcelo Bucheli’s well-documented and complete book, Bananas and Business, belongs in this category. Exploring the little-known case of Colombia in the first book on the subject, the author uses “several primary sources that have not been used by any other scholar to date” (p. 6), which gives the book solid and valuable support and allows him to present a thorough account of UFCO’s operations in Colombia.

Bucheli begins by giving a general history of the banana business from the last years of the nineteenth century to the present: the change of banana consumption from “a luxury good to [a] basic staple” (pp. 24–31), the interruptions experienced in the first half of the twentieth century because of the world wars and the Great Depression, and the recent changes in the international food market. His use of substantial numerical data provides the reader with an accurate description of those important changes.

In chapter 3, Bucheli discusses UFCO’s changing business strategy, giving the reader an understanding of the company’s adaptive responses to a business and political environment that presented different challenges during the twentieth century. He explains the ideas and practices that allowed the creation of a great company in backward countries with no representative governments; the technical reasons that drove land acquisitions and vertical integration (p. 49); the challenge posed by growing nationalism beginning in the 1930s; and the long-range readjustment program that UFCO began in 1960 (pp. 64–75). Bucheli reveals the internal logic of these changes and the particular sequence of events—not always favorable—that explains the company’s strategy. This presentation facilitates a critical analysis and dispels myths that have been constructed around UFCO.

Chapter 4 deals with Colombia’s political evolution in the twentieth century and is perhaps the best part of the book: clear, concise, balanced, and successful in explaining UFCO’s strategy in that country. It begins with a synthesis: “The United Fruit Company did not wield the same kind of political and economic influence in Colombia that it wielded in Central America” (p. 86). Furthermore, Bucheli states, the company did not receive concessions “as generous, compared to ones” received in Central America (p. 90). He deals with press and union opposition to UFCO begun in 1923. In chapter 5, he considers in more depth the general strike and the conflict that ended in the massacre of CiÈnaga in 1928 because he prefers not to interrupt his overall historical account. This decision is a good one because it allows the reader to get the general picture before reading about the more sensitive issue of the massacre. Bucheli goes on to describe the social reforms carried out by the leftist administration of Alfonso LÛpez Pumarejo starting in 1934 (pp. 98–100), the moderate governments that followed, and the chain of events that induced UFCO to sell its lands in Magdalena and to begin to operate in the Urabá region with a totally new strategy: buying bananas from local planters instead of growing them on its own plantations.

The massacre of UFCO laborers is important because this infamous event forms part of the company’s “terrible reputation” (p. 3): Colombian novelist Gabriel García Márquez tells the story in his novel One Hundred Years of Solitude, referring to three thousand deaths, a deliberate inflation of the number of victims to make the story more spectacular: he later admitted that this number cannot be taken seriously. “In his [García Márquez’s] words, ‘the legend has been taken as history’” (p. 3). In fact, as Bucheli explains exhaustively, there was no revolutionary movement in Magdalena in 1928, and the number of victims was most likely no more than fourteen. The fact that García Márquez’s imaginative work has had so much influence on scholars is, I think, in part the reason for the intellectual bias against UFCO that prevails in Latin America.

Chapters 6 and 7 illustrate very well the peculiar conditions that the corporation faced in Colombia after World War II. The first, “Nobody’s Triumph,” describes a strong union movement that “went to strike for almost any reason,” while UFCO “always ended up giving them what they asked for” (p. 142). In the end, UFCO preferred to close operations in the Magdalena Valley and to operate in Urab·, selling its plantations together with its labor problems. With this move, workers lost the high level of protection and good wages they had enjoyed when they worked for the corporation. In chapter 7, Bucheli analyzes the relationship between UFCO and the Urabá banana planters.

As a whole, Marcelo Bucheli’s book is comprehensive and accurate, offering a realistic view of an important and unusual company. The reader may sometimes wish for more detailed information about UFCO’s operations, but this small fault is offset by a sound approach to the period and the social and political environment in which the company had to work. Bananas and Business reports valuable research, and it will certainly be useful for all those scholars who need to understand the true forces at work in the complex world of the plantations, the turbulent politics of Latin America, and the banana business.