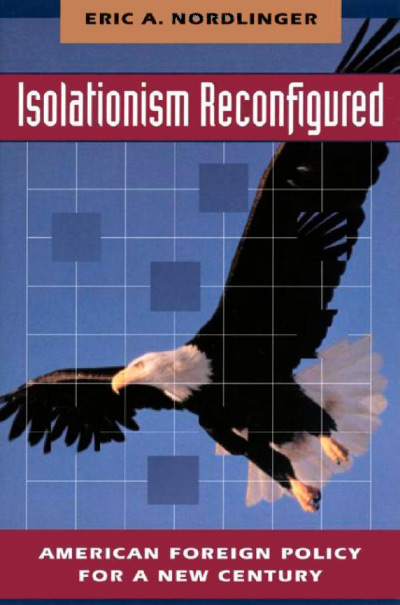 The Cold War may have ended, but America’s Cold War military remains. The United States accounts for 40 percent global military spending, maintains more than 200,000 soldiers in Europe and the Far East, and spends as much, in real terms, as it did in 1980, when there still existed a Soviet Union, Warsaw Pact, and an international communist menace. To what end? Containment no longer applies, but advocates of an oversize military have been creative in developing substitute doctrines.

The only alternative strategy to receive much attention is old-fashioned isolationism, advanced by such figures as Patrick Buchanan and Ross Perot. Their “America First” prescriptions, mixing military nonintervention with protectionism and xenophobia, have been routinely dismissed by Washington’s establishment. Indeed, isolationism has become an all-purpose epithet in Washington. Criticize foreign aid, the Agency for International Development, or risky military adventures in Bosnia, Haiti, and Somalia, and you are labeled an isolationist.

It wasn’t always this way, explains the late Eric Nordlinger, of Brown University: “there is virtually no disagreement about isolationism’s having served the country exceptionally well throughout the nineteenth century” (p. 11). Even up to World War II, a noninterventionist foreign policy remained a viable alternative. Nordlinger argues persuasively that “with the benefits of hindsight the reasonableness to full validity of most of the isolationist arguments can be readily argued” (p. 12).

The victors in America’s policy wars have written most of the histories, however, and so thoroughly have they trashed isolationism that virtually no one, whatever his policy proclivities, has voluntarily adopted the label. But Nordlinger accepts the challenge of rehabilitating it.

He begins by defining isolationism, a term often caricatured by its opponents, and goes on to write, “the strategic vision of historical and contemporary isolationism is one of quiet strength and national autonomy” (p. 5). The United States need not go abroad to ensure its security. On the contrary, doing so is counterproductive because “[t]he United States is strategically immune in being insulated, invulnerable, impermeable, and impervious and thus has few security reasons to become engaged politically and militarily” (p. 6).

There are two varieties of modern isolationists, he suggestsnationalist conservatives wanting a return to normalcy, and libertarians desiring smaller government. Their similarities greatly overshadow their differences. Along the way, he distinguishes what isolationism is not. It is not appeasementafter all, “it was Britain and France, not a disengaged America, that pressured Czechoslovakia to concede much of its territory to Hitler at Munich” (p. 5). Nor does it necessarily involve economic protectionism, though some isolationists, as well as avowed internationalists, have backed protectionist measures.

Equally important, noninterventionism is not synonymous with a dovish foreign policy. Engagement can be either adversarial or conciliatory, both of which “derive first and foremost from the common assumption of America’s vulnerability” (p. 34). Whether one is a dove or hawk depends on one’s assessment of the intentions of adversaries. Nonintervention, in contrast, is equidistant from both. In practice, its prescriptions may seem more dovish, but the underlying philosophies of the policies remain far different.

Nordlinger next develops the components of what he calls “a national strategy” (p. 39). “First and foremost, its minimal political-military activism translates into an exceptionally narrow security perimeter, the narrowest one that can provide for the nation’s security” (p. 39–40). In general, threats against this core interest are defended against; activities outside of it are ignored. “There are no allies and clients to be defended, no threats of extended deterrence, interventions, negotiated settlements, military and economic assistance programs, and only a few arms control treaties” (p. 40).

Obviously what constitutes America’s appropriate core interest is a legitimate matter of debate. Many past noninterventionists, even early in the Republic’s history, considered all of Latin America to be part of America’s security zone. Nordlinger advocates a narrower definition: the North American land mass, U.S. movement in international waters, and transit of non-U.S. shipping to and from America. Still, the differences between noninterventionists pale in comparison to those between noninterventionists and both doves and hawks who see U.S. security at stake almost everywhere on the globe.

Having set out what he believes to be the nation’s fundamental security interest,Nordlinger goes on to “delineate its doctrinal rationale”: that “America’s security is maximized by a minimal activism around the narrow core” (p. 41) and that the United States “enjoys a privileged position in being strategically immune within the narrow security perimeter” (p. 41). Potential threats exist, of course, but are not likely to prevail. Outside of this perimeter, even hegemonic challengers are not likely to be successful or, if successful, are not likely to seriously threaten American security.

The bulk of Isolationism Reconfigured is devoted to expanding this argument. Nordlinger divides his “comprehensive immunity concept” into its constituent parts: “insulation, invulnerability, impermeability, and imperviousness” (p. 41).

Each point is well argued, backed by historical detail and serious analysis. First, he says, the United States is relatively insulated from events abroad. America enjoys “buffers and barriers, deflecting and negating each of the expansionist means at the rival’s disposal” (p. 65). Recent history supports Nordlinger’s analysis. For instance, early Soviet successes in the Third World proved to be ephemeral. Extensive military aid and intervention by Moscow led to few permanent gains; moreover, smaller nations, rather than joining the communist bandwagon, chose to balance against it. Eventually the economically enfeebled Soviet Union cut aid to its client states. Similarly, the fear of the possible “Finlandization” of Europe was always counterfactual. “A vision of Finlandization in America’s absence runs up squarely against the European states’ long-standing communist antipathies and wariness of Moscow’s peaceful wiles, valued national traditions and strong democratic institutions, as well as their size and economic wherewithal” (p. 72).

He argues similarly that America is relatively invulnerable economically and militarily. Washington long exhibited “geostrategic indiscriminateness” in calling virtually every nation overseas vital to the national interest (p. 78). However, most of these claims were meaningless. Vulnerable in wartime and of little advantage in full-scale conflict, even Soviet bases in the Caribbean, he argues, would have been potential liabilities for America’s adversary. America’s military forces are also both impermeable and imperviousthat is, incapable of being surpassed by those of its enemy and unlikely to be overwhelmed even if the adversary’s forces were bigger and/or better. He concludes: “The qualitative strategic advantages that the Soviets almost certainly could not have achieved are barely imaginable in effective conventional forces” (p. 89).

Isolationism Reconfigured contains many more solid arguments. For instance, Nordlinger contends that the difficulty in responding to the perceived intentions of one’s opponents should bias the nation toward a more isolationist policy, for “activist policies premised upon mistaken understanding of the other side’s intentions regularly eventuate in security deflations” (p. 93). Guaranteeing the nation’s core security interests, in contrast, is not so dependent on accurately assessing intentions.

a nonengaged America, relieved of the heavy demands of extended deterrence, would have had little reason to worry about its credibility once the security perimeter was defined in terms of our highest intrinsic values. Some forty years of global containment in protecting secondary and tertiary material interests so as to enhance the credibility behind the protection of our central and core interests were thus unjustified, less than efficacious, the grand design and its enormous security sacrifices largely, if not entirely, superfluous. (p. 117)

Nothing in the European experience before World War II suggests otherwise, he convincingly argues.

Although Nordlinger emphasizes the defense of America’s core security interests, he is not disinterested in idealism. Indeed, past isolationists were not “ethically unawares, insensitive, or jaundiced” (p. 192). Rather, they believed nonengagement was a better means of promoting their ideals. And given America’s recordfinancial and military support for a variety of international thugs and thievesinternational activism is by no means a sure method of promoting the “liberal project,” as he puts it (p. 183). Much of the controversy is about means rather than goals, and in a number of ways, contends Nordlinger, isolationism, or a more complicated “concurrent foreign policy,” which relies on leadership other than military involvement, is a more effective means (p. 205). In such a case, the United States would be a better international model. He also believes, probably with less justification, that nonengagement would further “U.S. moral leadership within the United Nations” (p. 207). America could also rely on other alternatives, such as economic sanctions.

With the end of the Cold War and serious security threats against the United States, a debate over foreign policy is long overdue. It is extremely unfortunate, then, that Eric Nordlinger is not alive to take part in it. For Isolationism Reconfigured offers a blueprint for a new approach, “an American foreign policy” (p. 263).

And one is badly needed. Americans like the image of standing tall, Nordlinger notes, but he also admonishes:

There are, however, two ways of doing so. One posture involves standing up to rivals, standing upon the foundations of an enormous military buildup, and standing on the beaches of a minuscule, barely defended Grenada in a mood of national self-congratulation. The alternative posture is one of standing upright in conceiving and pursuing an independent foreign policyin not permitting others to define what is and is not in our interest, what is and is not a setback; purposefully refusing to become caught up in the great efforts and minutiae of appearing strong in the eyes of others; focusing upon central interests rather than transforming peripheral matters into tests of resolve that must invariably be passed; saying no when implored by others to serve nominally common interests instead of making overt bids for predominance that are often resisted and rejected; not allowing the promotion of liberal ideals to be set aside and disfigured by highly inflated security needs and sensitivities; pressing and pressuring on behalf of free and fair trade instead of being self-deterred by concerns for alliance unity. (p. 278)

It is a message that citizens and policymakers alike should heed.