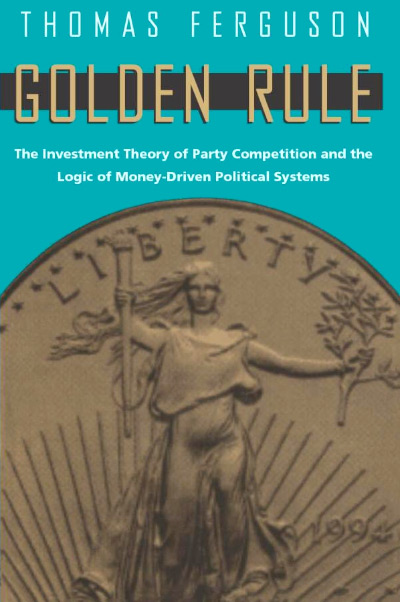 Golden Rule
The Investment Theory of Party Competition and the Logic of Money-Driven Political Systems
Thomas Ferguson
Kindle Paperback
This book review appeared in the Spring 1996 issue of The Independent Review.

Thomas Ferguson has worked for fifteen years to make two claims about democracy in the United States. First, “rule by the people” is a sham, and always has been. Second, the social “sciences” have badly botched the job of finding out why. Golden Rule is a collection of some highlights of this work, and anyone who wants to understand politics in America ought to read it.

Four of the six essays and the appendix have been previously published in some form, but these have been revised and extended, some significantly. Chapters 5 and 6 are published here for the first time, and extend the thread begun in Ferguson’s book with Joel Rogers, Right Turn: The Decline of the Democrats and the Future of American Politics (New York: Hill and Wang, 1986). The introduction is tart, and states the common themes of the essays succinctly: Ferguson began this work

because I was convinced that modern students of politics resemble adherents of Ptolemy in a Copernican worldand the now fashionable “rational choice” approaches to analyzing electoral systems produced not rigor but mortis. It was high time, I thought, to spell out precisely what was wrong with the celebrated “median voter” approach to electoral democracy and to put forward a clear alternative, in which as long as basic property rights do not emerge as the dominating issue competition between blocs of major investors drives the system. (pp. 9–10; emphasis in original)

The claim that the “median voter” misleads scholars of industrialized democracies is where Ferguson has invested most of his attention, and with this argument his work stands or falls. Before assessing the argument directly, let’s recall some intellectual history on wealth and government.

The idea that it is possible to translate concentrations of economic power into political power is venerable. Adam Smith, in An Inquiry into the Nature and Causes of the Wealth of Nations (1776, vol. 1, bk. 1, chap. 10), cautions: “People of the same trade seldom meet together, even for merriment and diversion, but the conversation ends in a conspiracy against the public, or in some contrivance to raise prices.”

For Marxists, of course, the observation that owners of capital, and not workers, control government is axiomatic. In Karl Marx’s Capital (vol. 2, chap. 21) we are told: “When commercial capital occupies a position of unquestioned ascendancy, it everywhere constitutes a system of plunder.” Now, if capital (or any other group) subverts government to its own ends, “system of plunder” seems a fair description. But how is this “position of unquestioned ascendancy” achieved? Marx’s bluster aside, there is little in classic Marxism that accounts for the role of money in politics.

Some observers have called Ferguson’s analysis Marxist, but he would more accurately (and aptly) be labeled a “Fergusonian.” Adam Ferguson (1723–1816) was a philosopher-historian of the Scottish Enlightenment, a contemporary of Adam Smith. His two major works, Institutes of Moral Philosophy (1769) and Principles of Moral and Political Science (1792), are in several ways superior to Marx’s better-known writings nearly a century later.

Adam Ferguson’s main thesis was that differences in status in the workplace, and in the community based on wealth, extend to differences in power in the political and social setting in which work takes place. Thus, the accumulation of wealth, from whatever source, creates a demand for perpetuation of privilege. Wealth also affords a disproportionate influence over government policy. People with money share interests with the other wealthy, and recognize the need to use their power to make sure those interests are protected.

Modern political science has made little use of this approach. More recent work on contributors has tried to rationalize why money matters at all in politics, rather than to gauge its effects. The difficulty, as I have argued elsewhere (with William Mitchell, in “Economic Theories of Interest Groups: An Introductory Survey,” American Journal of Political Science 35 [1991]: 512–46), is that if voters are well informed and bribery is illegal, money has no function, and can therefore have no effect.

Our two Fergusons will have none of this. Voters might want (if anyone asked) more government support for unions, less price regulation that ensures profits for railroads, or a national health-care plan. But no one asks: voters never get a chance to choose policy directly because all they do is select representatives. And representatives need money to have any chance of winning an election. Thomas Ferguson calls this the “campaign cost condition,” and places it at the center of his theory of the dynamics of American politics.

There are two additional aspects of Ferguson’s theory worth pointing out. The first is the claim that competition among moneyed interests is unlikely to solve the problem of access to the agenda. Ferguson calls this the “principle of noncompetition across investor blocs,” noting that “on all issues affecting the vital interests that major investors have in common, no party competition will take place” (p. 28; emphasis added).

Second, Ferguson argues that although elections do not simply go to the highest bidder, only access to money from investors makes a real campaign possible. Since representatives need money to get elected, they can’t take positions unpopular with moneyed interests, though those positions would win in the “perfectly informed voters” world of the median-voter theorem. Voters cannot overcome the transaction costs of pooling their resources, so they must accept the choices offered.

Ferguson is openly scornful of any approach that takes as its explicandum how voters choose, given the alternatives. The perceptive reader will note that this criticism of rational-choice theory by Ferguson actually applies with equal force to Michigan-style “psychological” approaches to the study of politics. The question of what factors lead voters to vote one way or another is trivial: all the choices are the same on key issues. The key to American politics is to understand where ballot choices come from, and to do that one must “follow the money.”

Consequently, proposed “reforms” such as changes in the electoral system (creating a third or fourth party, limiting spending, or imposing term limits) or changes in the electorate (less restrictive registration laws or better voter education) are red herrings. Ferguson claims the problem is that voters are too poor, not too stupid or too lazy, to get what they want.

The argument in Golden Rule has three parts. The first is a critique of the median-voter theorem as a predictor of policy processes. Other scholars, including Robert Higgs, Melvin Hinich, and Douglass North, have leveled such criticisms recently, but Ferguson’s critique is unique, well thought-out, and clearly documented. The second component is his evidence for the importance of money in deciding who wins elections. Ferguson excels at archival research, and he writes well. The new essays, on the 1988 and 1992 elections, are particularly interesting.

The final portion of the argument fares much worse. Ferguson’s investment theory is supposed to be an alternative to the median-voter model, but he never offers anything a formal modeler could use to describe this theory, in spite of his claims: “The argument can be developed with any degree of detail and formal rigor” (p. 381). Perhaps it can be, but the job isn’t done here.

The “comparative statics” of his theory are simple: if moneyed interests want constancy, that’s what they get, until they want change, which they also get. Ferguson claims no one can emerge as a contender without the full support of the veto-bearing barons of power, so no real choices are ever presented to voters. But if we can’t observe the counterfactuals required to test the theory on positive grounds, or compare it to alternatives on some normative basis, what do we do? In particular, what is a fair way tohold elections? Who would win, and what would change?

Another problem is that there are some small difficulties with the way the book is put together. One jarring note is that there are no collected references, but brief references at the end of each essay instead. Chapter references do identify discrete sections of literature, but they seemed to me to call even more attention to the fact that this is really an edited volume rather than a book. The first four essays, in particular, seem like a collection of vignettes.

Finally, and most discordantly, several essays have been rewritten after the fact to answer critics. Two of the critics, Michael Webber and William Mayer, come in for special abuse. This diversion to take on criticism that many readers will not even know about is confusing, and seems more defensive than informative.

Fortunately, most of the book reads very well and is written clearly. Minor shortcomings aside, Golden Rule works well as a collection, and represents an important challenge to orthodox conceptions of politics and public-choice theory.