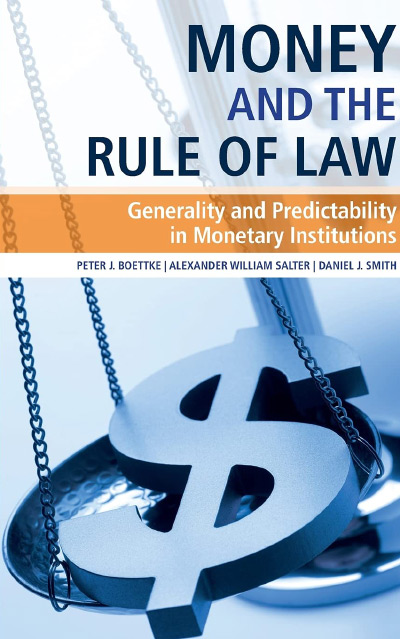 Money and the Rule of Law
Generality and Predictability in Monetary Institutions
By Peter J. Boettke, Alexander William Salter, and Daniel J. Smith
Kindle Hardcover Paperback
This book review is a web exclusive for the Spring 2022 issue of The Independent Review.

In Money and the Rule of Law, Peter Boettke, Alexander Salter, and Daniel Smith call for a radical change in monetary matters. They call for the rule-of-law to replace the rule-of-men. On their account, such a change would move us to practices that reflect price-theoretic truths and widely shared liberal principles—truths and principles that contemporary thinking and ways of proceeding in monetary matters often neglect outright or offer excuses to ignore. Moreover, on their account, such a change would better serve prosperity and overall human flourishing.

Although a call for rule-of-law may hardly be radical, the book makes clear that rule-of-law in monetary matters would be radically different from the status quo. Even our rhetoric might be transformed. If the authors’ call were heeded, no longer would we talk of monetary “authorities” and monetary “policy” (at least not as we do now). We would not speak in the language of “objectives” and “targets.” Instead, our focus would be on monetary institutions.

In this book, readers will not find a proposal to abolish central banks, though they might wonder if the authors have some sympathy for such a position and supporters of such a proposal may find here grist for their mill. Nor will readers find in this book a rejection of technical monetary theory, though they might well suspect the authors would prefer that it take a very distant backseat to other work. While the authors call for rule-of-law in monetary matters, readers will also not find in this book a list of particular governing rules. What readers will find is (1) a three-part argument in support of rule-of-law in monetary matters; and (2) evidence that, as matters stand now, we are much further from rule-of-law than conventional wisdom suggests. Readers will also find (3) an articulation of the roles and features of monetary rules consistent with rule-of-law; (4) an urgent call for scholarship that might help us discover a robust monetary constitution—one that not only reflects proper means but is also superior on instrumental grounds; and (5) a brief chapter reflecting on the money-related scholarship of F.A. Hayek, Milton Friedman, and James Buchanan, along with an homage to Ludwig von Mises in the final chapter of the book.

The crux of the book is its three-part argument in support of rule-of-law in monetary matters. The first two parts of the argument emphasize practical faults with discretionary monetary policy. The third part offers a social philosophic reason to oppose discretion. The three parts of the argument are not themselves novel. Quite to the contrary, they are tried-and-true ideas for those steeped in what Boettke has coined the “mainline” (as opposed to “mainstream”) tradition and in James Buchanan-style constitutional political economy. What is novel is the full laying out of the argument in the context of monetary matters. For readers unfamiliar with the “mainline” tradition or with constitutional political economy, the ideas are clearly articulated and easily accessible. For others, though the underlying ideas may not be new, the read is a worthwhile investment, as the authors offer many salient and striking examples and organize the application of the ideas in helpful ways.

The first part of the argument, laid out in chapter two, is that “knowledge problems” plague contemporary central banking. Modern central bankers are tasked to use their discretion to manage the economy and achieve certain objectives. Just like central planning though, this task is impossible. Even if central bankers had the wisdom to do so, they don’t have the information they need to do so well (and perhaps not even tolerably). Moreover, they face the conundrum that their discretionary interventions are themselves a key source of their knowledge problem.

The second part of the argument, laid out in chapter three, is that perverse incentives, like knowledge problems, are inherent in discretionary central banking. In particular, central bankers with discretion are, on the authors’ account, central bankers under the influence of the vagaries of politics. As such, their incentives may well not align with pursuit of the public interest.

The third part of the argument is not laid out until chapter six. Here, on the basis that money is property, the authors reason that central banks ought to adhere to the rule of law—a principle on which conservatives, classical liberals, and progressives alike have historically agreed. This part of the argument is likely to be the most unfamiliar to readers, perhaps especially to mainstream economists who are less likely to think in social philosophic terms than those in the mainline tradition.

Some readers may well find one or another single part of the authors’ three-part argument a sufficient basis to support the authors’ call for radical change in monetary matters. In the context of international trade policy, Paul Krugman (1987. “Is Free Trade Passé?” Journal of Economic Perspectives, 1(2) [Fall: 131–144) has argued that while knowledge problems alone might not be sufficient to reject free-trade interventions, the combination of knowledge problems and political economy concerns constitutes good reason to forego interventions. Some readers may likewise find the combination of knowledge and incentive problems inherent in discretionary monetary policy sufficient to reject it. I encourage these readers to consider that the full force of the authors’ argument is best appreciated with all three parts of it in combination. On this count, the authors could have done more to help readers appreciate the ways in which the whole of their argument is something besides its parts.

There are a number of natural objections to the authors’ call for rule-of-law over discretion in monetary matters. For example, a reader might object that monetary policy can be (and has been at times) conducted by rules rather than discretion, and might argue that an overhaul of monetary institutions is not necessary on this count. The authors take up this objection at several points in the book and explain how pseudo-monetary rules actually constitute discretion rather than true rules consistent with rule-of-law. Citing the Fed, readers might also object that the problem of perverse political incentives is overcome by central bank independence. The authors take up this objection as well and argue that, contra much conventional wisdom, the Fed is, in fact, not independent. In addition, the authors take care to explain that the problem of misaligned incentives is not merely that central bankers, like other people, respond to incentives and may therefore deviate from using their discretion as intended. Rather, the problem runs deeper, as Armen Alchian (1950. “Uncertainty, Evolution, and Economic Theory.” Journal of Political Economy 58(3): 211–221) taught us. The problem is that the institutions of central banking select for certain kinds of central bankers. As such, those institutions are the heart of the matter. Finally, a reader might object that while rules are well and good for ordinary times, in times of crisis, surely discretion in monetary policy is warranted and helpful. The authors devote the entirety of chapter four to this concern. Here, they explain why crises do not weaken the case for true rules. Importantly, their argument is not that we must bear the difficult times of crises in order to do better during normal times. Rather, it is that the principles and lessons laid out in chapters two and three apply with even more salience during times of crisis than they do during normal times.

As the authors wrapped up their book circa mid-2020, a global pandemic was raging and the chairman of the Fed was promising to use its “powers forcefully” (p. 172). In the closing paragraph of the book, the authors write that “The two economic crises of the twenty-first century [the global financial crisis of 2007–2008 and the COVID-19 pandemic] bring us to a crossroads for monetary institutions and policy . . . The choices we make in the next few years regarding the institutional underpinnings of monetary policy will affect us for decades to come” (p. 183).

Roughly a year-and-a-half later, the U.S. has just recorded its highest inflation rate in nearly three decades. I am less sanguine than the authors may be that we are currently situated at a potential critical juncture for change in monetary matters. I suspect the transformation for which they argue is a long-term project. In any case, this book has the potential to set us on a path towards change. I hope readers will engage its arguments within their intellectual and moral communities and especially have the courage to discuss and share the book with those who are likely to be skeptical of its central arguments.