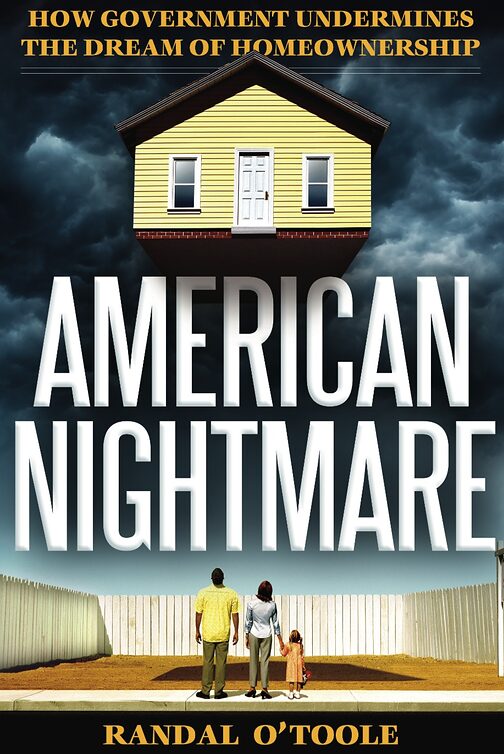 American Nightmare
How Government Undermines the Dream of Homeownership
By Randal O’Toole
Kindle Hardcover
This book review appeared in the Spring 2013 issue of The Independent Review.

I recommend Randal O’Toole’s American Nightmare for both academic and general interest readers, especially anyone who wants to learn more about the contemporary real estate market. It is very informative and insightful about a topic that represents most peoples’ largest expenditures and largest investments, our homes. It is both a wonderful history of housing and an informative analysis of the most recent housing bubble and crisis.

The only major problem I have with the book is the author’s attempt to make state and local growth-management policies the cause of the housing bubble. This mistake would be a fatal flaw in any book, but to give the author due credit, I must recognize that his effort is more scientific, analytical, and rigorous than most explanations of the bubble given by mainstream economists, such as Nobel Laureate Paul Krugman and Federal Reserve chairman Ben Bernanke.

O’Toole begins with much-needed objectivity in regard to the “American Dream” of home ownership. Both Bill Clinton and George W. Bush, in their terms as president, heavily promoted the idea of homeownership as a social cure-all, and in the process they helped to push more bubble resources into home production. We now realize that renting and leasing can be more efficient for younger Americans and can make for a more mobile labor force.

I also learned from the book that Thomas Jefferson changed his mind from agrarianism to a balanced approach toward agriculture, manufacturing, and commerce. O’Toole shows that much of America’s success in attracting immigrants can be attributed to the elimination of feudal laws in regard to land property, such as entail (one cannot sell inherited land) and primogeniture (the oldest male heir inherits all land property). O’Toole mentions “allodial title,” ownership of all fair rights to one’s property, free of taxation—a type of property well fitted to a libertarian society.

The quality and conciseness of O’Toole’s history are exemplified in chapters on the urban, suburban, New Deal, and postwar “dreams.” He uses charts and statistics but also relies on general history and social, cultural, legal, and legislative history to tell lively and informative stories. At the most basic level, he shows how entrepreneurs came up with new solutions to the housing problems that arose from economic growth and how government “solutions” eventually led to major problems.

In the chapter titled “Questioning the Dream,” O’Toole lays out the underlying theme of the book: housing policy represents a kind of class warfare by elites and upper-income groups against the working class. In addition, he debunks the myths attached to several housing issues, so this chapter is an especially important one. Elites, environmentalists, and other socialists want the working classes bound up in densely packed towers of small apartments with no cars so that the vast wilderness can be preserved for their mansions and nonmotorized recreational use. In contrast, regular people, including the working and lower middle classes, tend to share Frank Lloyd Wright’s view of housing as exemplified by his fictional “Broadacre City,” where most people live in big homes on large lots and most transportation is by automobile. O’Toole successfully debunks myths associated with suburban sprawl, environmental issues, and government subsidies.

The chapter “Low-Income Dreams” is perhaps the most depressing one in the book. From the New Deal to the present, the federal government intervened in housing with the goal of “fixing” it. Urban-renewal projects, for example, were supposed to help poor neighborhoods by subsidizing the destruction of low-income housing, an obvious broken-window fallacy. In the city where I was reared, an urban-renewal project destroyed the lakefront area in order to build a road so that traffic could bypass the business district and relieve traffic congestion. We ended up with no lakefront, far less business, and a declining economy.

Public-housing projects have been an obvious failure, but O’Toole shows that the results are far worse than most people imagine. Not only have the programs been destructive, but they have also created additional social problems and produced racist results. Even proponents of government housing have realized the disaster they have caused, but they have unfortunately merely moved on to other “approaches” to government-provided housing, ignoring the possibility that a free market in housing and a good job are what people need to end up with good, affordable housing.

However, the author then takes these discoveries and makes them out to be the cause of the recent housing bubble. His justification is that prices rise and fall to a greater degree in growth-managed areas than in nonmanaged areas. Because supply is inelastic in managed areas, small increases or decreases in demand lead to wide swings in prices.

We can agree that growth-management polices and natural-supply constraints amplify price responses to changes in demand. However, the Federal Reserve via the banking system is the actual cause of the bubble. The author admits that lower interest rates and looser lending standards pushed up prices (p. 187). He also quotes favorably two Canadian economists to the effect that the housing bubble was caused by “an initial positive mortgage-credit supply shock, leading to greater price increases” (pp. 190–91). This argument boils down to the claim that growth-management policies caused the bubble, which was only touched off by some shock or factor, such as lower mortgage rates. Paul Krugman is famous for this type of argumentation, where the actual cause is inserted as one of many possible random factors that ignite rather than cause a bubble.

The problem is that O’Toole begins with the definition of a bubble as a large increase in prices, a definition he borrowed from a mainstream economist. However, bubbles necessarily have a quantity dimension as well. If supply were perfectly inelastic (that is, constant), an increase in demand would elicit a really large price increase, but after the temporary or psychological shock subsided, price would return to normal, and no resources would have been malinvested.

The quantity dimension can be more important than the price dimension because tangible resources are people locked in place. Nonmanaged real estate markets can expand the quantity of housing to a much larger extent, and therefore we expect that more real resources are actually malinvested there compared to managed areas. Managed cities saw prices skyrocket, but not building permits; unmanaged cities saw small price increases, but many experienced huge increases in the demand for permits. All this explains why, when we examine the list of banks that the Federal Deposit Insurance Corporation has taken over, we find many banks in nonmanaged states that O’Toole does not list as housing bubble states.

I generally agree with O’Toole concerning most of his policy analysis and recommendations. His conclusions boil down to recommending no government intervention in the housing market—neither subsidies nor constraints other than enforcement of basic property rights.

The one curiosity that struck me is that although the book is well researched and well documented, it contains no citation of the recently published book edited by Randall Holcombe and Benjamin Power, Housing America: Building out of a Crisis (New Brunswick, N.J.: Transaction; Oakland, Calif.: The Independent Institute, 2009). Many of the authors in this volume have written about housing issues in other places as well, but I did not notice many, if any, references to them in O’Toole’s book. Given that O’Toole himself wrote one of the chapters in Housing America, it cannot be supposed that he is unaware of the book.