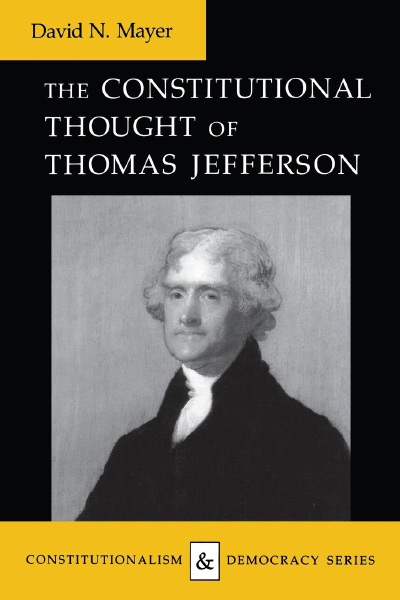 The Constitutional Thought of Thomas Jefferson
David N. Mayer
Hardcover Paperback
This book review appeared in the Spring 1996 issue of The Independent Review.

Thomas Jefferson continues to fascinate scholars. A voluminous literature examines his long public career and extensive comments on political issues. Historians have shown particular interest in exploring the elusive philosophical underpinnings of Jefferson’s political persuasions. David N. Mayer makes a valuable contribution to this debate with his comprehensive study of Jefferson’s constitutional principles as they matured from the 1760s to the 1820s.

Mayer identifies three sources that shaped Jefferson’s thinking about constitutional questions. From the English Whig tradition, Jefferson derived the notion of a constitution as a check on the power of government in order to protect individual rights. The federal aspect of his thought emphasized the division of governmental authority into state and national spheres, each of which was further divided into distinct executive, legislative, and judicial branches. Jefferson also gave special weight to the republican character of government, in which governmental authority rested on popular sovereignty and majority rule. Mayer points out that Jefferson’s constitutionalism developed over time and was often influenced by the course of political events. Rejecting criticism that Jefferson as president did not always act in conformity with his previously articulated views, the author maintains that Jefferson’s use of power was remarkably consistent with his constitutional theory.

There is much to commend in this important book. Mayer happily moves beyond the tired debate over “liberalism” and “civic republicanism” that dominates the current historiography of the Early National Era. He contends that any attempt to pigeonhole Jefferson into modern categories threatens to distort our understanding of Jefferson’s constitutionalism. Rather, Mayer elucidates Jefferson’s thought on its own terms, and provides a thorough and disciplined account of Jefferson’s constitutional ideas. In so doing, the author skillfully probes Jefferson’s views on a variety of issues, including religious liberty, free speech, and slavery.

Mayer casts light on some of the fundamental issues in American constitutional history. One major interpretative problem grappled with by historians concerns the place of property rights in Jefferson’s thought. Because Jefferson substituted the “pursuit of happiness” for property in the Declaration of Independence, some historians have argued that he did not regard property ownership as a natural right. It appears that Jefferson never systematically dealt with the topic of property rights. After reviewing Jefferson’s somewhat contradictory observations about the nature of property ownership, Mayer suggests that Jefferson saw property as having elements of both natural and conventional rights. Jefferson was not bothered by inequality of wealth. Indeed, he asserted that heavy taxation of the wealthy to produce greater equality would violate natural law. As noted by Jean Yarbrough (“Jefferson and Property Rights” in Ellen Frankel Paul and Howard Dickman, eds., Liberty, Property and the Foundations of the American Constitution. Albany: State University of New York Press, 1989, pp. 69–71), Jefferson never endorsed any sweeping scheme of property redistribution. Yet at the same time, Jefferson was prepared to overhaul inheritance laws to encourage widespread property ownership. He urged the abolition of primogeniture and entail on the grounds that these devices artificially hampered the transfer of land and undermined equal opportunity to acquire property.

In addition, Mayer persuasively analyzes Jefferson’s famous maxim that “the earth belongs in usufruct to the living.” According to the author, this phrase encapsulated Jefferson’s concept of generational sovereignty. Although originally couched in terms of restricting the duration of laws and debts to a particular generation, this radical idea was transformed into a more generalized belief in constitutional experimentation. Unique among his contemporaries, he welcomed periodic constitutional change. Mayer pictures this favorable attitude toward change as “the hallmark of Jefferson’s constitutional thought” (p. 296). Jefferson was more concerned with responding to new circumstances and the will of the majority than with preserving stability of government. He urged frequent resort to the amendment process as a means of vindicating popular control. By the same token, he was hostile to constitutional development through judicial interpretation.

Throughout the volume, Mayer is sympathetic to Jefferson, absolving him of charges of hypocrisy and expediency in applying his constitutional theories. There is room to suggest that Mayer may have painted an unduly generous portrait of Jefferson the constitutionalist. For instance, he gives only brief attention to Jefferson’s failed attempt to revise the criminal code of post-Revolutionary Virginia. Yet Jefferson’s proposed changes, as discussed by Kathryn Preyer (“Crime, the Criminal Law and Reform in Post-Revolutionary Virginia,” Law and History Review 1 [Spring 1983]: 56–70), contained a curious blend of reform elements and harshly reactionary features. Although the bill limited capital punishment, it prescribed severe punishments, such as castration for rape. The plan also retained the ancient crime of petty treason, perhaps as a deterrent to the murder of masters by slaves. Obviously these provisions do not fit modern views of penal reform, but evidently Jefferson found them congruent with his vision of republican government. Jefferson’s efforts to alter Virginia’s criminal code may tell us more about his thinking than the heralded but largely symbolic abolition of primogeniture and entail.

Moreover, Jefferson was involved in numerous political controversies during decades in public life, and it is probably asking too much to expect consistent pronouncements and deeds on a variety of heated issues. Accordingly, Mayer labors with only partial success to show Jefferson’s fidelity to his principles. On the important question of states’ rights, Mayer observes that what changed “over time was not the essential theory of federalism but the side of the balance that Jefferson chose to emphasize” (p. 186). Yet it too often appeared to this reader that Jefferson’s point of emphasis was dictated by political considerations of the moment. In 1798, while leader of the opposition, Jefferson authored the Kentucky Resolution, in which he stressed the limited authority of the federal government and argued that the states could determine for themselves violations of the Constitution. Once in a position of authority, however, Jefferson felt less confined by the principles of strict construction. The Louisiana Purchase rested on an expansive reading of implied powers of the executive branch and had significant implications for federal-state relations. Mayer gamely justifies Jefferson’s apparent departure from the doctrine of strict construction by emphasizing Jefferson’s private misgivings about the constitutionality of the Purchase. But such an explanation cannot disguise the gulf between Jefferson’s actions and his professed commitment to limited government. Mayer more accurately judges that “the acquisition of the Louisiana territory did set a precedent for broad exercise of federal powers” (p. 216). By 1820 Jefferson, now in retirement, shifted gears again and vigorously opposed the nationalist tendencies of the Marshall Court. One might well conclude that federal power was suspect to Jefferson when he was not wielding it.

Jefferson’s attitude toward judicial review was similarly migratory. He was initially receptive to some type of federal judicial oversight of legislation. Indeed, he took the position that a bill of rights would give the federal judiciary a basis on which to safeguard encroachments on liberty by the other branches of government. However, responding to Federalist control of the courts and the Sedition Act trials, Jefferson later rejected the doctrine of judicial review in the 1790s. Rather, he espoused a tripartite theory of constitutionalism under which each branch of the government was free to interpret the Constitution and decide the validity of an act. Fueled by an abiding distrust of Chief Justice John Marshall, Jefferson came to rely upon the people rather than the federal courts to resolve constitutional difficulties. Not surprisingly, Mayer concedes that Jefferson’s outlook “was a result-oriented approach, to which he had been pushed by the force of political circumstances” (p. 290)

The author might also have profitably considered the impact of personal problems on Jefferson’s thought. Herbert E. Sloan (Principle and Interest: Thomas Jefferson and the Problem of Debt. New York: Oxford University Press, 1995) has recently argued that Jefferson’s chronic indebtedness influenced his opposition to Alexander Hamilton’s economic program and drove Jefferson’s insistence on frugal government. This raises the broader question of whether Jefferson’s constitutional outlook was deeply colored as much by his personal experience as by any ideology.

Mayer’s account of Jefferson’s constitutional thought raises some fundamental but unanswered questions. Did Jefferson fashion a coherent philosophy or simply express a series of ad hoc responses to events? Were Jefferson’s dire pronouncements in the 1820s a reflection of his mature constitutional theory or a sad crie de coeur for a lost vision of the new nation? What if the people, in whose virtue Jefferson placed so much confidence, proved less than devoted to individual liberty and state autonomy? Mayer declares that Jefferson’s unbounded faith in the people prevented him from recognizing that majority rule could threaten freedom, but he does not pursue the implications of this insight. Does it signal the ultimate bankruptcy of Jefferson’s constitutionalism?

These caveats do not detract from Mayer’s achievement. To explain Jefferson’s baffling and shifting theories of government is a daunting task for the most accomplished scholar. If perhaps overly sunny in assessing Jefferson’s constitutionalism, Mayer has provided an essential framework for studying Jefferson’s views about law and government. This rewarding volume deserves wide attention.