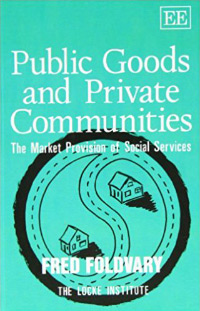 Public Goods and Private Communities
The Market Provision of Social Services
Fred Foldvary
Hardcover
This book review appeared in the Fall 1996 issue of The Independent Review.

This work demonstrates strong logic, thorough research, and use of the scientific method. Unfortunately, the argument is too disjointed to persuade those to whom it should be directed–neoclassical economists who accept the market-failure argument for public good provision.

Foldvary divides his book into three parts. In the first eight chapters he constructs a theoretical argument for voluntary community provision of public goods. The next five chapters present case studies of providing public goods consensually in communities. The final two deal with urban economics, public choice, and methods for increasing consensual governance.

Foldvary starts his theoretical argument by examining and rejecting the market-failure argument for public good provision: “The theme of this book is that this proposition is incorrect. The market-failure argument treats persons as atomistic agents living in ether rather than in three-dimensional space and in a context of institutions and history” (p. 1). He makes this argument so successfully that I found the first chapter the most valuable in the book. A standard public finance parable illustrates the argument: People living in a valley would benefit from constructing a dam. The market-failure argument implies that voluntary contributions would not suffice to pay for the construction, and the public choice argument holds that politically powerful interests can affect the dam construction decision, leading to a larger dam. Foldvary offers a third example to counter these two gloomy prospects–the communities living in the valley create community associations, and the associations finance the dam if the increased land value resulting from the dam’s construction exceeds the cost of the dam. Strict constitutional limits on the powers of the associations would diminish the potential for political failure.

Foldvary continues to criticize the market-failure argument in the second chapter, where his focus is the logic of the argument and the criteria by which the market outcome is judged. In rejecting the Pareto optimality criterion, he observes that “the market fails only relative to an unrealizable ideal system, not relative to governmental provision” (p. 21). The focus then narrows to concentrate on territorial collective goods, a class that Foldvary contends in reality comprises most public good provision. Relying on the premise that the values of territorial amenities are capitalized into land values, he argues that territorial goods are functionally excludable and therefore can be funded through user fees or means other than taxation. Site rent internalizes spatial externalities, inducing resources to flow to their most valued use. In making the argument, he fails to elaborate on how it differs from or improves on the standard Tiebout argument for polycentric government; nor does he discuss how the governance institutions relying on territorial site rents for revenue would differ from local governments that collect property taxes. He establishes the theoretical potential for using capitalized land rents to fund territorial goods, but he does not deal with the institutional issues: organizationally, how would a community association differ from a local government? Nor does he discuss the contention that having a local government to collect user fees based on marginal increases in rent could be the least-cost institutional structure, and this omission makes his argument less persuasive.

In the fourth chapter, Foldvary looks for insights in the literature of industrial organization, particularly the work of Coase and Cheung, but the effort is awkward and ultimately unsatisfying. He views a civic association as a firm with a contractual relationship between the association and the members/residents, but a firm is premised on well-defined and well-enforced property rights. Foldvary does not discuss here how realistic the analogy is for the provision of territorial goods, and he does not consider how a communal governance structure realistically would differ from a local government. He could have integrated the material from the previous chapter to argue that the marginal land rent would reflect ownership share, but he does not take that step.

In chapter 5, the author considers the distinction between consensual and imposed governance, an important distinction that, if integrated into the rest of the argument, could answer my previous questions about how a communal governance structure would differ from local government as we understand it today. Foldvary envisions the provision of territorial goods through constitutionally constrained associations that contract with their members; but his failure, throughout the book, to contrast this type of provision explicitly and repeatedly with local government provision weakens the argument.

In chapter 6, invoking a Buchanan-style club model, Foldvary argues that including space in a club model shows the effect of increased amenities on land rent, and that induced rent gives property owners an incentive to invest in territorial goods providing such amenities. His model is sound, but I question his placement of it outside his earlier discussion of territorial goods in chapter 3. I was also concerned about the conspicuous omission of the standard “Henry George theorem” in the club literature. David A. Starrett (Foundations of Public Economics. Cambridge: Cambridge University Press, 1988, p. 84) presents a club model incorporating space, resulting in “optimality” of public good provision when the local government owns all of the land and can tax all land rent. Starrett’s analysis is similar to Foldvary’s, but is within the institutional confines of neoclassical economics from which Foldvary is trying to escape. Only by dealing with work such as Starrett’s would Foldvary influence the thinking of mainstream economists on the institutional structure in which site rent can be used to fund public goods.

In chapter 7, Foldvary argues that even nonterritorial collective goods can be provided voluntarily, based on “Smithian sympathy,” or our fellow feeling with others. In this chapter he does not explicitly consider the standard economic rebuttal of that argument, which is that the good would be provided suboptimally. Earlier, in chapter 2, Foldvary argues persuasively that Pareto optimality is a false, unrealistic criterion, but he does not reinforce the point here, thereby making his argument for Smithian sympathy ring hollow for those who do not agree with him initially.

The next section contains case studies of consensual governance and territorial good provision. Foldvary seeks to demonstrate that voluntary provision of territorial goods is feasible, not that it will necessarily occur. He contends that falsification of the market-failure hypothesis requires only actual examples, not a formal theoretical rejection. After an introductory chapter highlighting some of the issues arising in the case studies, we visit the following consensual communities (one chapter for each institution): Walt Disney World; Arden, Delaware; the Fort Ellsworth Condominium, Alexandria, Virginia; Reston Association, Reston, Virginia; and the private places of St. Louis. Each chapter starts with a hypothesis to falsify, usually in the form of “the community association will fail to provide civic goods and amenities.” Recall that Foldvary has rejected Pareto optimality as a criterion of the “correct” level of collective goods provision, so he has left himself with straightforwardly falsifiable hypotheses, especially given his thorough research and discussion of the details pertaining to each case. Unfortunately, he does not consistently provide systematic discussion of the hypotheses (particularly in the Arden chapter), nor does he reinforce what he has shown in each case and tie it to the theoretical discussion in the first section of the book. Thus, the entire work seems disjointed, with little explicit connection between the theoretical and the empirical parts.

My general criticism is that the book as a whole might have been better organized and articulated. As mentioned earlier, the treatment of territorial goods is separated between chapters 3 and 6, but integrating this discussion in a single coherent chapter and bringing in more criticism of orthodox, opposing views would make the argument more persuasive. Another articulation problem is the lack of transitions, both among ideas in a given chapter and between chapters; the choppiness in the flow of the argument distracts the reader from its substance. Most important, Foldvary’s argument as it is presented probably will persuade only those, like me, who already agree with him and who have sufficient background in public choice and in state and local public finance to fill in the missing transitions and overlook the distraction of extraneous details.