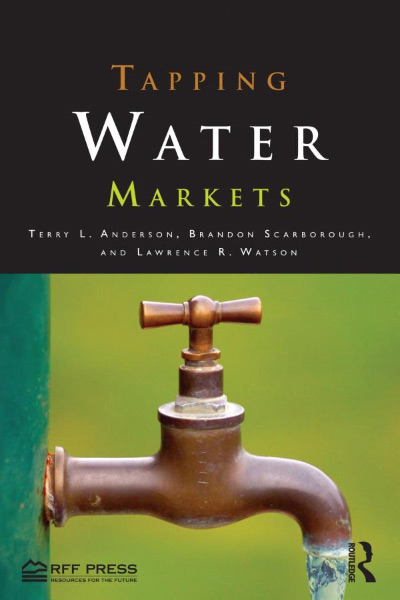 Tapping Water Markets is an important book. For decades, economists have advocated using water markets to help solve problems of scarcity and allocation. This book provides an excellent summary of many of the main lessons and principles economists have learned about managing water resources.

The central question is this: given that water is a finite resource, how should we allocate its uses? What mechanism should we use to decide this? Who, or what, should decide where water goes? The answer to these questions is fairly simple: whenever possible, let markets decide. Despite this seemingly simple answer to an almost impossible complex problem, the authors are not reflexively preaching a blind faith in markets. Rather, they back up their position with logical arguments, detailed explanations, and historical examples every step of the way.

The book flows logically. Anderson, Scarborough, and Watson begin by outlining the problem of water allocation, followed by a discussion on the difference between market allocations and political allocations, which becomes an important theme throughout the rest of the book. The third chapter is an exposition of water’s varied legal systems, especially a look at how the old English common law doctrine of riparian water rights gave way to the more strict doctrine of prior appropriation that evolved in the arid mountains and deserts of the American West. The fourth chapter shows how concerns over alleged market failures have led government to crowd out water market activities. The fifth chapter deals with specific legal doctrines that arose with prior appropriation that, while they may have made sense under the circumstances in which they were developed, now have become obstacles to water markets. Chapter six moves the discussion from the West, to the East, where the old riparian doctrine has been modernized, but the system is far from perfect as water issues become more and more relevant in the wet and humid areas of the country. In chapter seven, the authors examine cases where water has been purchased and used for environmental purposes, primarily restoring instream flows, and then detail the legality of this in several states. Chapter eight is all about water quality, and how market principles, including property rights, can improve water quality, and the ninth chapter explores solutions to the problem of groundwater overuse. The authors conclude that as the problem of water allocation becomes more and more pressing, and as users and policymakers begin to see the virtues of markets, water markets will become more and more common, as they have for the last few decades.

The current state of water markets in the U.S. can appear impossibly complicated, and sifting through the layers of archaic legal doctrines and overlapping jurisdictions can be a daunting task. The doctrine of prior appropriation, where the first to divert water and put it to use became the owner of the right to use that water, has become bogged down with too many additions that prevent it from working. Things like beneficial use, which prevents water from being used for something not approved by government, or “use it or lose it” which disincentivizes users from conserving when they cannot reap the benefits of their conservation, all play a role in preventing water markets from functioning smoothly. Eliminating and reforming these archaic doctrines are a key to functioning water markets.

The authors don’t just focus on what doesn’t work, they also give us some good examples of what does. In Oregon, for example, the environmental non-profit Oregon Water Trust was able to purchase water from local ranchers, and help restore the flows of the John Day River. In California’s Tehachapi Basin, farmers have a defined groundwater pumping right that can be traded or sold to other farmers, a system that has prevented the destruction of the aquifer on which the basin depends. Australia has gone through decades of reform in an effort to solve their water problem, with the result being a more efficient market-based system.

Some object to the use of markets to allocate water, arguing that water is an essential human right, and that it should not be subject to market conditions like prices or property rights. The authors remind us that water is not unlimited, and if the price of something is zero, the resource will be wasted. Markets have many advantages, a primary one being price signals. As the price of a resource increases, people have an incentive to find more of it, to use less of it, and to put it to more valuable uses. Contrary to the fears of those who oppose markets, allowing people to own water and charge a price for it will not result in an apocalyptic hellscape where all water is controlled by corporate water barons. In the real world, there is still plenty of water to go around, and undistorted water pricing will mostly mean farmers switching to efficient irrigation systems or southwestern landscapers opting for desert-friendly plants over grass.

On the other hand, political allocation gives special interests opportunities to engage in rent seeking. Water ceases to flow to its most highly valued use, and instead flows to whomever is the most politically well-connected. We see the effects of this, from state-run water districts to the federal Bureau of Reclamation, where restrictions on trading and subsidized prices have stifled innovation and encouraged waste.

Water is an essential ingredient of life, and domestic, agricultural, and industrial uses all compete for it. As human civilization continues to grow and expand, our demand for water has also increased. The problem of water shortages will only become more pressing as demand for water resources keeps bumping up against the limited supply of water. Fortunately, it appears that markets are winning. The final chapter is appropriately titled “You Can’t Keep a Good Market Down,” and across the world this appears to be the case. From expanding the definition of beneficial use, to defining property rights for groundwater, courts and policymakers have begun to adapt and evolve many of the outdated doctrines and institutions that have prevented water markets from functioning. As the demand for water increases, water markets will not be a luxury enjoyed by users in certain districts, but a necessity.