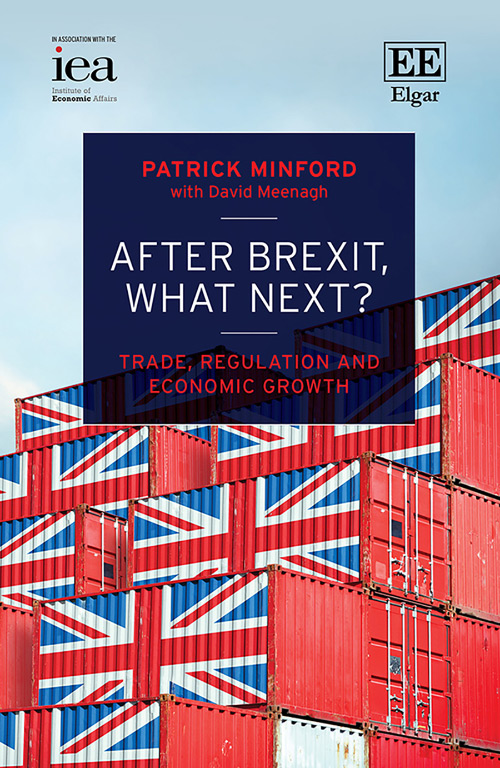 After Brexit, What Next?
Trade, Regulation and Economic Growth
By Patrick Minford (with David Meenagh)
Hardcover Paperback
This book review is a web exclusive for the Fall 2021 issue of The Independent Review.

As the title suggests, Patrick Minford offers a policy for the U.K. in a post-Brexit world. He played an important role in the debate over Brexit, serving as Leader of Economists for Brexit (now Economists for Free Trade). His background is macroeconomic modeling.

In the first part, he presents what he views as the economic burden of E.U. membership on trade, regulation, and taxation. He advocates reforms in each area. In the second part, he examines fiscal and monetary policy. The text was finalized in April 2020. So, on the way to optimal monetary and fiscal policy, he deviates through emergency policies for the then-emerging pandemic.

He starts with trade and immediately dives into the complexities of trade modeling. He promises the book would be accessible to “non-modelers” (p. vi). The book will be tough going, at times, however, for non-economists. We are quickly treated to a horse race between “gravity models” and those based on classical trade theory.

The stakes are high, because the gains or losses in trade from Brexit depend on which model is correct. His own Cardiff World Trade Model forecasts large benefits from Brexit. Depending on assumptions of how much protection of food and manufacturing is abolished, the gain in U.K. GDP is 4 to 8 percent. And prices would fall 8 to 16 percent. The effects occur because U.K. prices will be driven down to world prices. He envisions entry into the WTO, but also a series of FTAs with free-trade partners. It would be a coalition of the willing. The recently announced deal with Australia is a big first step.

Minford views harmonization standards as a mechanism “to reduce competition with the EU’s dominant producers in each industry” (p. 38). He views European labor market restriction as “hostile to job creation” (p. 38). He presents evidence from the OECD in support. And, again using OECD data, he presents evidence of heavy regulation of the product markets. His deregulatory program is to stimulate economic growth. Leaving the E.U. leaves the U.K. free to choose its own regulatory regime for goods not exported to the E.U.

On taxes, he adheres to the Ramsey Principle of equalizing tax rates across groups, commodities and time. That leads to a flat tax, and a move from an income tax to a consumption tax. He follows a familiar path on the growth enhancing effects of those moves (to a flat tax and then to consumption as the base). He suggests “an indefinite transitional provision” that anyone who would pay more under the new tax system could pay under the old system. It is reminiscent of Steve Moore’s alternative minimum tax. It addresses the problem of losers in tax reform.

Monetary policy must address the boom/bust cycle that is discrediting capitalism. As others have argued (see, for instance, John B. Taylor. 2009. “No Boom, No Bust.” Getting Off Track. Stanford, Calif.: Hoover Institution Press, pp. 4–6), Low interest rates bid up asset prices. Big companies with access to financial markets benefit at the expense of small- and mid-sized firms. Price signals are distorted. Minford calls it “The Great Distortion” (pp. 88–89). I have identified this policy regime as crony capitalism (2010. “An Economy of Liars.” Wall Street Journal. April 20). Crony capitalism is the enemy of free markets that Minford advocates.

Minford had to take a detour from his long-run policies through the coronavirus crisis. He says “yes, the government can manage it effectively” (p. 91). He had the misfortune to write this section at the beginning the crisis. He suggests that increased spending, financed by deficits and money creation are the recipe for getting through. As he correctly observes, the United Kingdom entered the crisis with a poor pre-virus policy. For instance, the debt/GDP ratio began at 80 percent and would certainly rise to 100 percent.

He argues the Treasury has a duty to borrow “at the lowest possible cost to the taxpayer” (p. 94). But the taxpayer in many cases is the same rentier who is being euthanized by terrible returns. It is no different than the policies being pursued in many other countries. But it is not a recipe for saving capitalism. In another context (the Great Depression), Hayek described this as the policy of a desperado.

There are two charts from Johns Hopkins University, updated through July 27, 2020, that supported his rosy forecast that there would be a quick recovery from the virus, and thus, a quick return to fiscal and monetary sobriety (p. 95). We now know that this was too sanguine a prediction. There was a second wave and new variants. Prime minister Boris Johnson is now hoping he can get the country back to a semblance of normality in July 2021, one year after the last date on the Johns Hopkins charts.

Minford then turns to fiscal and monetary policy post-crisis. “the government must sell off its private equity stakes and central banks must sell off their massive holdings of government bonds to contract the money supply. This is necessary to prevent serious inflation from taking hold” (p. 96). “If we consider the steady state spend-and-tax situation post-crisis, it looks like this:

We are obviously looking at model projections. We face a classic problem of how to get from here to there. A recession would surely be expected after a contraction in the money supply. And higher government spending. I am not disputing that tightening monetary policy may be necessary to avoid a Weimer Republic inflation process (Minford’s analogy [p. 96]). That is why many of us had misgivings about Federal Reserve policy in the pandemic. But the transition to the steady state will not be a smooth one.

And in the United States, there has been massive fiscal spending. It is politically very difficult to take benefits away from people once they have been bestowed. There are Public Choice dynamics, which macro models have difficulty incorporating. Optimal economic policy may not be politically optimal.

In the words of Brandon Lewis, the Northern Ireland Secretary, the situation is “not sustainable” (Alan McGuiness. 2021. “Brexit: U.K. Confident of Changes Being Made to Northern Ireland Protocol.” Sky News, June 23). Thus far, the E.U. has shown no willingness to renegotiate the Protocol.

In summary, Minford has written a very useful summary of the economic reasons for Brexit, and also presents the case for comprehensive reform in its wake. Many of these reforms are general and could apply to any economy. I recommend the book to all those interested in the meaning of Brexit.