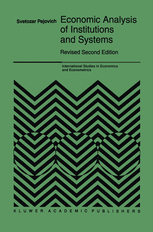 Economic Analysis of Institutions and Systems
Svetozar Pejovich
Kindle Hardcover Paperback
This book review appeared in the Spring 1997 issue of The Independent Review.

In his Knowledge and Persuasion in Economics (New York: Cambridge University Press, 1994) Donald McCloskey wrote affectionately of the Good Old Chicago School of Economics. The book under review belongs to another cherished tradition, the Good Old Property Rights School of Economics, a first cousin of the Chicago School. Although many people complain that recent studies in economic theory often have little relevance to actual economic systems, the Good Old Property Rights School cannot be accused of irrelevance. The use of simple economic theory has seldom produced more powerful and important results than did the early property-rights analysis of the Soviet enterprise and the labor-managed firm by scholars such as Svetozar Pejovich and Eirik Furubotn. Their joint survey of the property rights literature (“Property Rights and Economic Theory: A Survey of the Recent Literature,” Journal of Economic Literature 10 [December 1972]: 1137–62) is a modern classic. The empirical evidence on the Soviet enterprise and the Yugoslav labor-managed firm is now clear to (almost) all, and the evidence supports those early studies.

The renaissance of institutionalism in the last quarter of the twentieth century has fostered many different approaches. Scholars who draw on rational choice (purposeful behavior) and methodological individualism have struggled primarily with two major questions: (1) What institutional arrangements maximize wealth, and what are the consequences of deviations from optimal arrangements? and (2) What determines the choice of institutions, particularly in the political domain?

Studies that deal with both these issues have combined economic analysis, usually flavored with property rights and transaction costs, and rational-choice political science (and to some extent rational-choice sociology and anthropology). Pejovich’s book deals primarily with (1), the consequences of institutional arrangements, and the book’s strength lies not in an exhaustive survey of recent work but in a vivid, compelling, accessible, and often outstanding analysis of the role of incentives and transaction costs in economic life. The book provides intelligent people everywhere with a clear and reader-friendly introduction to the nature of economic systems.

In an effort to establish the link between institutions and wealth, the author examines how alternative institutional arrangements affect the costs of transactions and incentive structures and how costs of transactions and incentives influence economic behavior and economic outcomes. The book has thirteen chapters and is divided into three parts. Part 1, “Institutions and Property Rights,” sets the stage. Chapter 1 introduces scarcity and the consequent problem of choice as the roots of the economic problem. In chapter 2 the author attempts in thirty-five pages to review the history and development of capitalism and socialism, along with the history of economic thought. The presentation is elementary and haphazard, particularly the historical part, but the chapter contains a fair and interesting introduction to the work of Karl Marx.

Chapter 3 provides an excellent introduction to institutions, defined as the effective rules of the game. Pejovich emphasizes the individual’s subjective perception of reality, and he uses this observation to explain why the same set of formal rules imposed in different countries often produces different outcomes. The chapter carefully argues that informal rules, which are rooted in experience and culture, often strongly influence behavior. Later chapters give examples of the power of informal institutions, for instance, in the former Soviet republics of Eurasia.

Chapter 3 draws a sharp distinction between exogenous changes in institutions, which are outcome-oriented (the French or rationalistic tradition) and emerge mostly in the political domain, and endogenous or incremental changes (the British or empirical tradition), which emerge spontaneously through repeated voluntary interactions. Although all sensible people should beware what Vincent Ostrom calls “great experiments,” I find it unhelpful to make a sharp distinction between beneficial endogenous change and harmful exogenous change. In part, successful economic systems are the outcome of exogenous institutional change that emerges in the political domain and typically involves changes in property rights that increase global wealth at the expense of some group. Similarly, the notion that all voluntary exchange somehow is fair is too simplistic (consider a prisoner in a concentration camp who voluntarily exchanges his wedding band for a cigarette), and it assumes an entire social structure, which is not a necessary condition for voluntary exchange. Still, I agree with the general thrust of Pejovich’s argument that great experiments in social engineering usually end badly.

Chapter 4 is a good introduction to the economics of law and includes a discussion of the economic implications of the rule of law, and the distinction between common law and statutes. Pejovich sensibly concludes that the efficiency of common-law precedents is merely a tendency. The chapter also contains a useful and perceptive discussion of the law’s role in the transition process in Eastern Europe. Pejovich argues that the use of statutes and the power of the state to make a rapid transition from socialism to capitalism is a risky social experiment. He perceptively discusses the influence of informal norms, beliefs, and vested interests in the region, and he makes a convincing case for greater reliance on voluntary institutional change and incrementalism.

Chapter 5, “Property Rights,” defines the various types of rights. The book sometimes gives the impression that the traditional efficiency criterion supports only complete private property rights and not, for instance, communal ownership or nonprofit organizations. The literature recognizes, however, that in special circumstances arrangements such as communal ownership may minimize costs (when the cost of exclusion is relatively high and the cost of internal governance is relatively low).

Part 2 is titled “Property Rights, Exchange, and Production,” and begins, in chapter 6, with an excellent introduction to the Coase theorem and the notion of transaction costs. Simple numerical examples are used to illustrate these issues. Chapter 7, “Private Property Rights, Exchange, and Production,” teaches microeconomics in one short lesson, complete with property rights and transaction costs. The discussion emphasizes what most textbooks ignore, that competition in the market is above all a knowledge-creating process. The chapter ends with a reprint of an essay by James Buchanan, who discusses the perverse exchange culture that evolved in the Soviet economies and explains how it may interfere with a transition to well-functioning markets. Chapter 8 discusses economic results that follow from certain restrictions on private property rights, particularly price control and rationing, and includes a reprint of Henry Manne’s classic essay “The Parable of the Parking Lots.”

Chapter 9 does a good job of explaining production and exchange in Soviet-type economies and under Yugoslav self-management. There is also a brief discussion of not-for-profit organizations and state ownership in capitalism, which I find somewhat limited and strident. (The example of public schools that sell tickets to their football games at prices below the market-clearing level reminded me of the paradox of private rock groups that also rely on disequilibrium prices, inducing their fans to spend days and nights in sleeping bags outside the ticket office.) Chapter 10, “Institutions and Economic Development,” introduces the reader to interest rates, expectations, and the economics of innovation, but only touches on variations in growth rates among nations.

Part 3, “The Firm,” consists of three chapters. Chapter 11 introduces the new theory of economic organization, relying primarily on ideas associated with Armen Alchian, especially the economics of contracts and team-work, and discusses issues such as holdups and moral hazard. The following two chapters, 12 and 13, discuss four different types of firms: corporations and codetermining firms under capitalism, and government-owned and labor-managed firms in socialist societies. The general discussion of the organization of production and the corporation is vivid and lucid, but it is relatively narrow and somewhat dated. As one would expect, the account of the codetermining firm is excellent, as is the author’s analysis of the labor-managed firm and of the Soviet enterprise.

Finally, we come to the pros and cons. My first impression was that the book was of mixed quality, including both brilliant and rather sloppy sections, and the underlying research at times appeared to be thin. Occasionally, I did not appreciate the book’s spirit of advocacy, even as a strategy for winning converts. The pros, however, overwhelm the cons. Economic Analysis of Institutions and Systems is a powerful essay that examines the consequences of incentives and property rights for economic activity. Pejovich has made a valuable contribution to redefining the field of economic systems by an intelligent discussion of the damaging effects on human society of perverse property rights and disincentives. Although the volume sometimes pastes over problems and weaknesses in systems based on private ownership, its emphasis on the relative merits of a decentralized market system based on private property fully justifies its existence.