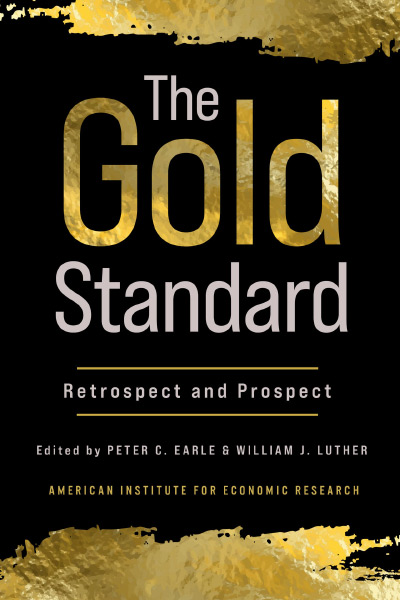 The Gold Standard
Retrospect and Prospect
Edited by Peter C. Earle and William J. Luther
Kindle Paperback
This book review is a web exclusive for the Spring 2022 issue of The Independent Review.

Published fifty years after Richard Nixon ended international convertibility of the U.S. dollar into gold and effectively ended the Bretton Woods System, The Gold Standard: Retrospect and Prospect is a volume featuring contributions by ten authors. In the editors’ introduction, Peter Earle and William Luther explain that they have two goals for the book. The first goal is to provide a better understanding of the mechanics of the gold standard and its empirical record. The second goal is to inspire monetary reform today by comparing the gold standard to current proposals for policy and—more, radically—by exploring the feasibility of returning to such a regime. Although this book will be most accessible to those with at least an undergraduate background in economics, it uses little mathematical analysis, so intelligent and curious non-experts should be able to follow.

The book makes a strong case that a well-functioning gold standard—one where the monetary unit is defined as a certain weight of gold and where paper money can be redeemed for gold at par—can produce desirable outcomes including exchange rate stability, price level predictability, and fiscal discipline.

The editors provide a simple supply-and-demand model where they show how profit-and-loss incentives guide goldminers in regulating the money supply. For example, suppose the public’s demand for money rises (i.e., people wish to hold larger real money balances). This increases the purchasing power of money. Goldminers will then increase their production until the purchasing power of money falls back to equilibrium. Evidence from the nineteenth century indicates that this process could take years, but the public could be confident about the price level decades into the future and plan accordingly. This contrasts with the current fiat period where higher average inflation has made the price level less predictable.

Following the introduction, George Selgin provides an excellent primer of U.S. monetary history from the Founding to Nixon’s 1971 decision. He explains how the classical gold standard operated largely without central bank intervention, while the latter systems allowed for greater central bank discretion, which ultimately led to errors bringing about macroeconomic instability. The classical gold standard was also a better example of a true gold standard as the public could redeem paper money for gold, while in the latter regimes, only central banks could redeem.

Thomas Hogan compares macroeconomic performance in three periods: the pre-Federal Reserve (Fed) “market-based” gold standard, the Fed-managed gold standard, and the current Fed-managed fiat standard. Hogan finds that inflation was lower and real output growth was higher under the market-based gold standard than under either Fed-managed system. While it is hard to infer causality between the gold standard and growth because output growth is ultimately determined by factors besides the monetary system, this correlation could be indicative that a more predictable price level under gold allowed for greater long-term investment. Both Selgin and Hogan also make an important observation that although the U.S. suffered from financial panics under the gold standard, such volatility should be attributed to bad regulation, which limited banks’ ability to diversify their portfolios and made them more susceptible to failure, rather than the dollar’s connection with gold.

Although much of the book extolls the virtues of the classical gold standard, a chapter by Kwabena Boateng and Joshua Hendrickson explains how the interwar regime brought about the calamitous Great Depression. Following the “Monetary Approach to the Balance of Payments (MABP),” Boateng and Hendrickson explain that since the nominal price of gold is fixed under a gold standard, “the price level must adjust to clear the gold market” (p. 77). If the demand for gold rises, the only way for the real price of gold to rise is for the price level to fall. This is what happened at the onset of the Depression when the Fed began to tighten monetary policy and when the Bank of France began to increase its gold reserves. Readers will also find that the MABP improves upon Milton Friedman and Anna Schwartz’s famous analysis of the Depression in A Monetary History of the United States (Princeton, N.J.: Princeton University Press, 1963). Friedman and Schwartz argue a collapse in the money supply brought about the Depression. While there is some validity to this, their work does not emphasize the role of the international market for gold. The MABP better explains the Depression’s proximate cause.

Chapters by Lawrence White and Bryan Cutsinger deal with returning to a gold standard today. White focuses on common objections to a new international gold standard and reasonably finds most of them to be underwhelming. For example, some economists argue that gold’s volatile price since 1971 suggests a new gold standard would lead to instability. This argument does not follow though since much of the volatility in gold is caused by the demand for gold as a hedge against inflation, which has risen since 1971. It makes more sense to assume that money’s purchasing power would be stable over the long run as it was under the classical system as the public would expect lower inflation and a more predictable price level.

Cutsinger discusses the feasibility of a gold standard for the world’s largest economies. He estimates how much countries would have to spend on accumulating gold to operate such a system. While the resource cost is not negligible, Cutsinger explains that the higher inflation from being on a fiat standard also comes with costs, including countries’ decisions to buy gold as a hedge against rising prices. Therefore, it is possible that a gold standard is actually cheaper than a fiat one.

White and Cutsinger’s analyses suggest that returning to a gold standard is technically feasible and could theoretically be an improvement upon the status quo. The challenge here would be that a new gold standard would have to be more akin to the classical gold standard than the interwar or postwar systems. Here is where I have reservations. Under the classical gold standard, the world was very different. Most countries either lacked a central bank or had ones that did not interfere with the system’s operation, and the public did not expect fiscal policy to carry out functions other than provide basic services such as defense and infrastructure. To approximately replicate this regime, monetary and fiscal policymakers would have to credibly commit to allowing the gold standard to work, but it is unclear that they would do this.

White correctly points out that one way to credibly commit to a gold standard is to allow private banks to competitively issue their own currencies. If private banks issue their own banknotes and are on the same standard (say, a gold-backed dollar standard), no single bank could devalue the dollar. White’s solution makes sense, and his research elsewhere indicates that such “free banking” regimes have worked well. However, it’s unlikely that governments today would move away from fiat-issued money and toward a system dominated by privately issued money given that fiat money gives governments greater ability to pursue their fiscal interests.

Chapters by Alexander Salter, Nicolás Cachanosky, and Luther look at alternative options for reform. Salter argues that fiat money can, in theory, be produced at a lower cost and adjusted more rapidly than money under a gold standard, but historically, fiat monies have not been well-managed. He then evaluates potential monetary rules designed to constrain central bank discretion under fiat money. In his opinion, a rule designed to stabilize nominal spending would outperform the gold standard, provided that the central bank is credibly committed to such a rule, but he concludes: “[H]ow to achieve and maintain that kind of a commitment. . .is far from obvious” (p. 206).

Salter is correct that fiat monies have historically been prone to mismanagement and that rules help constrain central banks from pursuing bad policies. However, central banks in developed countries have become at least somewhat more rules-based in recent decades than they were during the Great Inflation of the 1960s and 1970s. Since the 1990s, most major central banks have explicitly moved toward targeting an explicit inflation rate and have generally succeeded in reining in high inflation. This is not to say monetary policy can’t be further improved through rules, but it is hard to argue central bank performance has not improved at all over the years.

Cachanosky looks at reform for developing countries. Since many such countries suffer from high inflation and corruption, their central banks cannot be trusted to pursue sound policy. Cachanosky discusses two options, which could deliver some of the virtues the classical gold standard produced in the past. The first option is a currency board, which maintains a fixed exchange rate between the domestic currency and a foreign anchor currency by maintaining adequate reserves of the anchor currency. A successful currency board such as Hong Kong’s can produce price stability, but a mismanaged one such as Argentina’s, where there are insufficient reserves, can lead to disaster. The second, more radical option, is “dollarization” or the adoption of a foreign currency, with the U.S. dollar being the most popular, but not the only, choice. Dollarization is extreme in the sense that the domestic country cannot issue its own currency and is limited in its fiscal and monetary policy choices, but this is exactly the point. Ecuador is one example where dollarization has benefitted its people. Cachanosky’s chapter does a good job in explaining the relevant tradeoffs of each reform, and while neither is perfect, either option may be superior for countries that cannot be trusted to manage their own monetary policy.

Finally, Luther looks at “digital gold”—Bitcoin and other cryptocurrencies or “altcoins”—to see if there are ways they may be more widely adopted as media of exchange. Bitcoin’s fixed supply and its price volatility suggest that, in its current form, it is unlikely to become a commonly used currency. To succeed as a true money, an ideal altcoin would enable convenient payments and its “supply would expand and contract to meet [users’] demand” (p. 259). Luther acknowledges that creating such a cryptocurrency is technically difficult and probably a long way off, but he does not rule out that it may one day exist.

Overall, The Gold Standard: Retrospect and Prospect provides a sympathetic, but not starry-eyed view of gold money. The authors acknowledge that the gold standard, like any policy choice, comes with important tradeoffs. While most economists, including myself, are skeptical of the prospects of a return to gold today, this volume does an excellent job in explaining that a gold standard has many benefits, in abstract, and that the classical gold standard, in particular, performed better than most economists today acknowledge. Both fans and critics of the gold standard will benefit from lessons in this book.