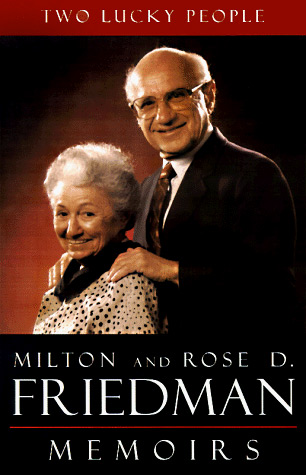 When interviewing student candidates for prestigious national scholarships, my favorite question runs something like: “If you had unlimited funds for planning the perfect dinner party consisting of any ten people you choose, whom would you invite? And why?” Their responses tell me volumes about the students’ range of interests, knowledge, verbal talent, and ability to think on their feet.

Like solitaire, the “ideal dinner party” game can be played alone, and I often play it when I am bored. Although my guest list changes slightly from time to time, depending on my mood and current interests, invariably at the very top of my roster are Milton and Rose Friedman. The Friedmans are my automatic selection not only for my perfect dinner party but as the persons I would most like to accompany on a long journey. Reading their revealing and stimulating memoirs is the next best thing to taking that voyage. They place the reader in the company of two of the most remarkable people of our time.

The memoirs extend from the Friedmans’ early years to 1997. The earliest times are recounted in separate voices by Rose and Milton, each telling her or his own story seriatim. For the later years, their narrative voices are presented sometimes jointly and sometimes in tandem. This method adds a great deal to the readability and interest of their story. It allows the reader to get different impressions of the same people and places and brings out the (rare) disagreements between the two authors. It provides more information and presents a more vivid picture than is typically the case in memoirs by a single author.

Rarely and after a long interval there emerges an economist whose name is destined to become associated with a whole epoch of economic thought and policy. In the period since 1930 only two such names have surfaced: John Maynard Keynes is one of them. His ideas about the causes and cures of unemployment dominated the teaching and research of economists during the period roughly from 1936 to 1970.

Milton Friedman is the other name in the pantheon of recent greats for whom epochs are designated. By one empirical measure he is by far the most influential economist in America, as John Huston and I have shown (“Reputation versus Influence: The Evidence from Textbook References,” Eastern Economic Journal 23 [Fall 1997]: 451–56). But how did he reach this pinnacle? And by what criteria might we judge his achievement? There are two major rubrics under which one might place Friedman’s most important work.

First are the contributions he made to the development of economic theory, what Alfred Marshall, in an earlier century, referred to as the “engine of analysis.” The committee that selected Friedman for the Nobel Memorial Prize in Economic Science in 1976 placed great emphasis on that aspect of his output.

The second criterion is harder to characterize and yet is of paramount importance. It might be referred to as the influence Friedman had in affecting the intellectual and social currents of his era. That influence would include not only his impact on economic and social policy by inspiring legislation and court decisions, but his role in determining the very issues that would be debated.

Of course the two categories are not mutually exclusive and often are so intertwined as to be inseparable. Keynes, for instance, developed a new “box of tools” (in Joan Robinson’s phrase)consisting of such technical arcana as the consumption function, the investment multiplier, the liquidity-preference function, and the marginal efficiency of capital, among othersthat changed the vocabulary and way of thinking of economists who deal with aggregate income and employment problems. But Keynes did more than provide a new arsenal of weapons to be used in what later came to be called macroeconomics. For his ideas had enormous consequences for the practical policy debates of his time. Without his ability to impress his fellow economists with his talents for theoretical abstraction, it is highly unlikely that Keynes would have had much impact on the economics profession and ultimately on public officials.

Like Keynes, Friedman developed new theories (and ingenious ways of testing old ones). His work led to an exhaustive reevaluation of the efficacy of fiscal and monetary policy and to a revisionist view of America’s monetary history, especially in relation to the Great Depression. His statistical testing of Keynes’s consumption function resulted in an alternative view of the relation between consumption and income; and his famous Workshop in Money and Banking at the University of Chicago eventuated in a more sophisticated version of the quantity theory of money, a theory that in its more naive formulation had led Keynes and his disciples to underestimate the potency of monetary factors in economic change. These contributions have become part of the modern economist’s vocabulary and way of dealing with economic issues. One chapter of the memoirs is devoted to a lucid discussion of Milton’s scientific scholarly work in a manner that laymen should be able to follow without difficulty. In this illuminating discussion Friedman commands a very simple and straightforward style of saying very complicated things.

But far more important than his abstract theorizing and statistical techniques has been his impact on the agenda of economic debate. There is hardly a major controversy among economists in the post–World War II period that hasn’t taken Friedman’s work as its point of departure: fixed versus flexible exchange rates; the relationship between political and economic freedom; an all-volunteer army versus a conscripted army; positive versus normative economics; the deregulation of industry; fixed rules versus fine-tuning in economic policy; the causes of the Great Depression; a flat tax versus a progressive income tax; the legalization of drugs versus prohibition; a voucher system versus socialized schoolsall of these debates were initiated by a provocative article or book by Friedman. No other economist in his day, or perhaps in the twentieth century, has broken ground in so many areas later tilled by others.

Many of these ideas were developed in collaboration with Rose Director Friedman, his co-thinker and wife, whom he met when both were graduate students at the University of Chicago in the 1930s. One of their professors seated the students alphabetically so that Milton and Rose found themselves next to each otherjust one example of the good luck they have enjoyed throughout their lives, which gave their joint autobiography its title. A friendship developed between Rose and Milton, eventually leading to marriage in 1938. Although a well-trained economist herself, Rose decided from the beginning that Milton’s career should come first. She would be a mother first and an economist second. In Rose’s words, “I have never had the desire to compete with Milton professionally (perhaps because I was smart enough to recognize that I couldn’t). On the other hand, he has always made me feel that his achievement is my achievement” (p. 87). And with good reason. After her children were grown, Rose began collaborating with Milton on some of his most important projects.

The fruit of their first collaboration was published in 1962 (Capitalism and Freedom [Chicago: University of Chicago Press]). It contains the essence of Milton Friedman’s economic policy counsel and shows the interconnection between much of his earlier work in pure theory and his espousal of a coherent classical liberal philosophy that holds individual freedom to be paramount. Because Friedman’s ideas were out of keeping with the left-liberal dominance of economics and politics at the time, the book was not reviewed by any major national publication. Eventually, however, it sold over a half-million copies, was translated into eighteen languages, and became one of a small handful of books that “along with books and writings by Ludwig von Mises and Friedrich Hayek played a major role in spreading and keeping alive an understanding of the meaning of a free society” (p. 340). In the fullness of time the royalties from the book paid for the Friedmans’ hexagonal dream house in rural Vermont, which they named “Capitaf.” (Some of the most delightful parts of their memoirs are descriptions of their life in that idyllic setting).

The academic year 1962–63 gave evidence of astonishing industry on Friedman’s part. In addition to Capitalism and Freedom, he published Price Theory: A Provisional Text (Chicago: Aldine, 1962) and his magnum opus, co-authored with Anna Jacobson Schwartz, A Monetary History of the United States, 1867–1960 (Princeton, N.J.: Princeton University Press, 1963). Those works and the output of the previous decade were beginning to bear fruit all over the world. Consequently he began to have an impact on politics, which changed his life from the relative simple one of a typical academic to that of an international celebrity. He was the subject of a Time cover story in late 1969, and the New York Times Magazine followed with a Friedman cover soon afterward. He became a columnist for Newsweek, was the subject of an interview in Playboy, and appeared regularly on television talk shows. Eventually he hosted his own ten-part TV series called “Free to Choose.” The book that accompanied that project was co-authored with Rose and became a best-seller. Milton’s name and face became instantly recognizable by large segments of the general public.

In 1976 Milton Friedman was awarded the Nobel prize in economics. His fame was to carry the Friedmans around the globe many times. Milton lectured, studied, met with top-notch scholars and high-level government officials the world over, all the while working on material for articles and books.

But the Friedmans always seemed to find time for sight-seeing and recording their impressions in lengthy informative letters to family and friends. Because neither kept a diary, they found those letters invaluable for refreshing their memories for their joint autobiography. Large segments of the book consist of their reactions to many of the people and places they visited. Here the reader will be grateful for the authors’ perceptiveness, their shrewd insights, and their acute generalizations based on keen powers of observation. They record their impressions in a way that makes vivid almost everything of interest that they encountered. Thus, the reader will be treated to fascinating accounts of politicians for whom Milton became an unofficial adviser: Barry Goldwater, Richard Nixon, and Ronald Reagan. Friedman also consulted with foreign leaders, including Margaret Thatcher and Menachem Begin, among others. On a visit to China in 1988 he engaged in a lengthy dialogue with Zhao Ziyang, at the time the general secretary of the Communist Party. That dialogue, along with a memorandum Friedman sent to Zhao, appears as an appendix (pp. 607–16).

The self-confidence that Friedman displayed in his meetings with powerful world leaders helps explain his amazing career. To this factor I would add his seemingly unlimited energy, uncommon brilliance, creative mind, andas he and Rose would insistluck.

To read Two Lucky People is to get on intimate terms with a wholly delightful and wholly admirable couple. Here is a book to savor. Instructive and endlessly entertaining, it brings to life a whole era from the Great Depression to the present day.