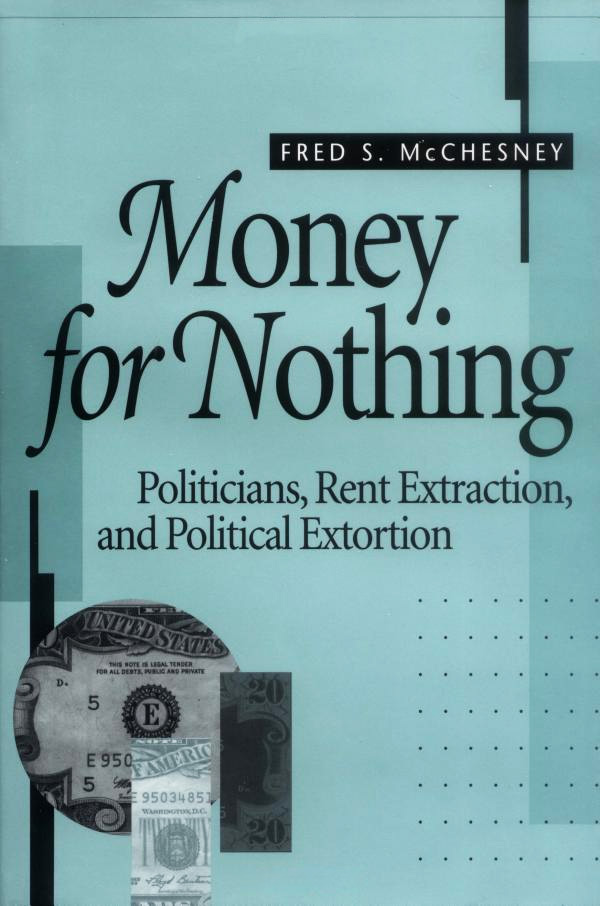 Money for Nothing
Politicians, Rent Extraction, and Political Extortion
Fred S. McChesney
Hardcover
This book review appeared in the Summer 1998 issue of The Independent Review.

In Money for Nothing, Fred McChesney ably describes a model of rent extraction, discusses related empirical work, and indicates interesting extensions of the model. Although he acknowledges the contributions of rent-creation models in public-choice economics, he points to the inability of those models to explain certain phenomena. Throughout, he makes clear that the rent-extraction model is meant to supplement, not replace, rent-creation models. McChesney’s primary critique of rent-creation models is that they have focused largely on the demand side, implicitly representing suppliers as mere passive brokers. Wouldn’t one expect self-interested suppliers, especially those in positions of great power, to act more aggressively?

Although rent extraction is McChesney’s primary concern, he also describes rent creation, often to use it as a foil. Simply put, rent creation is an attempt to gain political favor, whereas rent extraction an attempt to avoid political disfavor. In describing rent extraction, McChesney uses a variety of tools, including anecdotes and even popular literature. For example, he borrows William Faulkner’s “mud farmers”—extortionists who created a sufficiently muddy road to trap passers-by in order to elicit “contributions” from them. He also provides a variety of examples of public-policy extortion—threats to reduce prices in a regulated industry, to withdraw a license to operate, to undermine a firm’s fixed-cost investments in brand-name capital by producing subsidized quality guarantees, to enact military conscription (and allow a buy-out option), to heighten environmental regulations, and to impose interest-rate ceilings. Prominent contemporary examples include Clinton’s health-care proposals, threats to regulate tobacco, and proposals in the realms of product-liability legislation, tort reform, and flat taxes.

In view of all the examples, it’s surprising that the concept of rent extraction has been slow to surface. McChesney illustrates the oft-met character of the paired concepts by weaving everyday examples into his description of the contrast between rent creation and rent extortion: bribes versus extortion, carrots versus sticks, and Thomas Sowell’s observation that armed robberies typically involve no violent act. But McChesney also provides compelling explanations for why rent extraction has been overlooked. It is not surprising, for instance, that economists would focus on actual, as opposed to threatened, transactions.

After describing rent extraction, McChesney develops the model more fully. He establishes the conditions under which rent creation or extraction will occur. In particular, the relative attractiveness of the two strategies depends on the elasticities of demand and supply. If demand is relatively inelastic, rent creation will occur; if supply is relatively inelastic, rent extraction. The decisive question is, Which group does the politician have more completely over the barrel?

This analysis leads to a number of other interesting observations. For instance, McChesney notes that “the popular revulsion against paying politicians presupposes that payments are made for special favors since the calls for reform constantly focus on limiting what individuals can give—not the total of what politicians can take” (p. 54). (He could have made the same point by noting how much the public despises the presence of foreign lobbyists.) Although producers account for the bulk of such activity, McChesney also discusses consumer groups. His example of the National Rifle Association’s spending money to avoid additional gun regulation is particularly compelling. The irony is that the existence of the organization lowers transaction costs for the politicians negotiating and collecting funds, making expropriation easier.

As has been done with regard to rent creation, McChesney documents the inefficient behaviors of people seeking to protect themselves from expropriation. At least in type, these examples remind one of the corruption of third-world governments. He also discusses this issue in light of the dilemma of how to have a state strong enough to protect our property rights yet somehow to constrain it from expropriating our property.

McChesney devotes much attention to the game-theoretic aspects of the “contracts” between the politician and the extorted. In particular, the extralegality of the contracts creates some interesting dilemmas. Given that expropriation will be threatened and that both parties prefer longer-term contracts, it is easy to imagine the importance of “good faith,” reputation, and contract durability. In contrast, both parties have their concerns: the extorter worries about his inability to credibly commit to inflicting pain, and the extorted fears ex post political opportunism.

McChesney views these contractual arrangements as a repeated game, pointing out the effect of potential legislative turnover and the role of tenuous majority-party status and a seniority-based committee system in extending expected contract durability. He also notes that with the number of committee members, subcommittees, and unelected staff members increasing in recent years, there are more people to deal with in arranging such contracts, making their execution more costly and therefore less likely.

The book has other merits as well. Foremost, it is artfully written. In his opening chapter, “Background,” McChesney provides an eloquent synopsis of the history of economic thought with respect to theories of regulation. The chapter serves as an especially useful introduction for the uninitiated. Along the way, he also provides “a short history of federal income taxation” (pp. 90–96) and a thorough discussion of the many ways by which politicians can be compensated, including in-kind gifts, honoraria, and purchases of tickets to various high-priced meals (pp. 45–55). Putting aside consideration of the book’s expense, it (or excerpts from it) would make a nice addition to any course that covers public policy.

The book does have a few deficiencies. For instance, McChesney draws excessively strong inferences from the correlation between average tenure (as a proxy for contract durability) and the recent acceleration in tax legislation (pp. 102–3). Average tenure is often a flawed proxy for measuring expected tenure. And he mostly compares the period 1965–66 to 1975–76, which overlooks the impact of the Watergate class on that measure of tenure. Moreover, it turns out that continuation rates actually increased significantly after the campaign finance “reforms” of 1974 (see W. Robert Reed and D. Eric Schansberg, “How Long Do Congressmen Stay in Office?” Economics and Politics [1990]: 173–92, and “The Behavior of Congressional Tenure over Time, 1953–1991,” Public Choice [1992]: 183–203).

McChesney discusses a number of interesting extensions of the rent-extraction model, but other important questions remain unanswered and even unasked. First, it is not clear why individuals would propose threatening legislation in cases where the benefits of the extortion would go to other individuals—in particular, to those whose ideologies are opposite their own. Regarding the NRA case, for example, why would Charles Schumer threaten greater degrees of gun control if the threat serves only to increase campaign contributions to members of Congress who oppose such measures? One would like to see “micro” explanations for such phenomena.

As McChesney notes, the likelihood of extortion increases as benefits increase and costs decrease. But more specifics would be useful to promote study of the impact, for instance, of the amount of wealth available to be transferred, of the varying ability of politicians to credibly commit to expropriation, and of the underlying ideology of politicians and the public. For example, he assumes the “second-best world,” in which expropriation will take place, before wishing in his conclusion for something closer to the optimal world of a greatly reduced state. But what conditions would cause us to move toward such a world?

Given the parallels between rent creation and rent extraction, it seems strange that the key to effective rent creation—imposing subtle and diffused costs on a rationally ignorant and apathetic public—is not dealt with well in a model of rent extraction. With rent creation, when the hard-to-see costs become obvious, reform tends to follow. In contrast, the costs of rent extraction are obvious from the outset. If interest groups know they are being extorted, why do they tolerate it? Why don’t they fund challengers? The implicit assumption may be that barriers to entry are too high for prospective challengers or that, once in office, any other politician would act the same way. But these possibilities are neither well specified nor totally satisfying.

Likewise, McChesney claims that a politician gains more than a trivial amount if he has to go through with his extortion bluff (p. 39). But this outcome is not at all clear. The benefits of regulation would be diffused among all members of Congress—at best, indirectly and trivially benefiting him—but the electoral costs could be high. McChesney asks why “politicians’ returns from rent extraction are so small” (p. 162). Perhaps my conjecture holds the answer.

Finally, he wrestles a bit with the impact of limits on campaign contributions and concludes correctly that their effect would be more complicated than one might initially expect (pp. 168–70). Another fruitful topic along the same lines is the possible impact of term limits.

McChesney wryly notes that the upshot of all his considerations “hardly corresponds to the legislative process as taught in eighth-grade civics classes” (p. 45). One would hope that models of rent creation and rent extraction would soon become part of the standard curriculum.