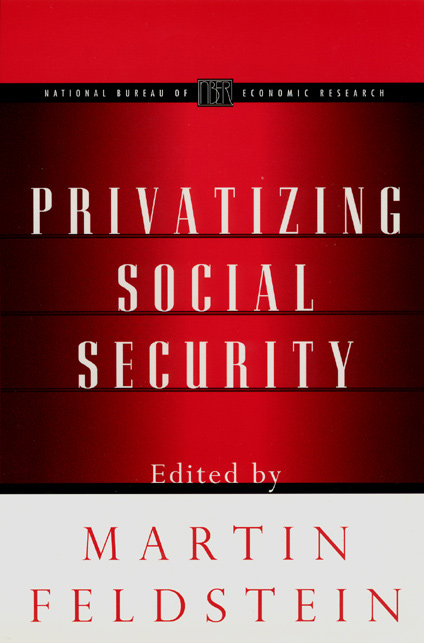 Social security used to be called the third rail of American politics, because any politician who touched it was risking political death. Thankfully, that characterization is no longer apt. The impending crisis of Social Security has forced politicians of both parties to think seriously about reform. Although the dominant view in Congress is still that Social Security can be “saved” by a judicious combination of benefit cuts and tax increases, successful privatizations elsewhere have broadened the horizon of the politically feasible. The collection of papers on privatization edited by Martin Feldstein is therefore both timely and vital.

Privatizing Social Security contains ten papers plus comments and an introduction. Five of the papers examine privatizations abroad (in Chile, Australia, the United Kingdom, Mexico, and Argentina). Three papers model the economic effects of various privatization plans in the United States, paying particular attention to the transition path from a government system to a private one. One paper reviews the evidence on how individuals currently structure their voluntary retirement plans. A final paper surveys the evidence on administrative costs in public and private retirement systems.

In the introduction, Feldstein makes a simple but profound point that drives the rest of his analysis. If tax rates remain constant, then a pay-as-you-go Social Security system cannot pay a rate of return in excess of the growth of real wages. Previous generations received high rates of return from Social Security only because the tax rate kept rising (from 2 percent in 1940 to 12.4 percent since 1988). But tax rates cannot rise forever, so the most future retirees can expect to earn on their Social Security “savings” is about 2.6 percent a year (the rate of growth of real wages since 1960.) Over the same period, however, corporate capital has earned a rate of return of 9.3 percent. The difference between what Social Security pays and what an individual could earn with a portfolio of stocks and bonds is equivalent to a tax on labor earnings. The tax is substantial. Following Feldstein, consider a 45-year-old employee who contributes $1,000 to Social Security to “buy” benefits that will be paid at age 75. At 2.6 percent, the $1,000 contributed pays out $2,160 thirty years later. But at 9.3 percent the same $1,000 contribution pays out $14,408! Put differently, to receive $2160 at age 75, the 45-year-old contributor must invest $1,000 in Social Security but only $150 in a private system. Thus, Social Security greatly increases the costs of financing one’s retirement.

Feldstein’s second article in the volume, written with Andrew Samwick, is also outstanding. It is often argued that privatizing Social Security will require that today’s young workers pay Social Security taxes twice, once to finance their own retirement and once to finance the retirement of current retirees and older workers. As Feldstein and Samwick show, that argument is wrong. Because the rate of return is much higher in a private system, the same retirement benefits can be funded with a much lower contribution rate, just 1.86 percent of wages. Therefore, young workers can fund their own retirement and that of current retirees with a payroll tax of 14.26 percent (12.4 + 1.86). Actually, even that calculation overstates the long-run cost, because it doesn’t take into account the increase of national income arising from higher savings and reduced dead-weight loss. Taking those considerations into account and assuming that privatization will be phased in over time, Feldstein and Samwick find that by the twenty-fifth year of the transition, payroll taxes would actually be lower than they are today, and by the sixtieth year taxes would have fallen close to their equilibrium value of 2.04 percent.

Feldstein and Samwick show that the net gains from privatization are very large for today’s children and for future generations, positive for today’s young workers, and slightly negative for today’s middle-aged and older workers. Middle-aged and older workers therefore might vote against privatization (alas, children and future generations do not have a current vote). The gains for children, however, exceed the losses for middle-aged and older adults. Many parents, therefore, might vote for privatization as a gift to their children. (Parents who plan to leave their children bequests would surely do so, because privatization plus a reallocation of bequests could leave every member of the family better off.) In another paper, Laurence Kotlikoff shows that it might be possible to make everyone better off by privatization if privatization were combined with a shift from labor to consumption taxation. Another way to eliminate the redistribution problem is to fund the early years of privatization with sales of government assets such as land. Selling the millions of acres currently held by the federal government would improve the efficiency of the economy at the same time that it smoothed the transition to a better retirement system.

Thanks to the proselytizing efforts of Jose Piñera, the father of the Chilean privatization, the success of Chile’s system has become well known. Sebastian Edwards finds that pensions under Chile’s private system are approximately 50 percent higher than pensions in the (slowly disappearing) government system. Although administrative costs were initially very high and are still high by American standards, they are now lower than under the government system. The private system has also fostered higher rates of saving and a much more efficient capital market. Edwards points out quite correctly, however, that we have at least as much to learn from the defects of Chile’s system as from its successes. Although Chileans may choose the firm with which they invest their pension savings, the investment funds themselves are remarkably conservative and similar. A large part of the problem stems from a regulation requiring that if a fund’s return in any twelve-month period falls more than 2 percentage points below the average fund’s return, that fund’s management must make up the difference from a capital reserve. Penalized for underperforming but unrewarded for outperforming the average, the fund managers limit their downside risk by following the crowd. As a result, the full benefits of diversification have not been achieved, and Chileans cannot adjust their portfolios to match their preferences for risk.

The United Kingdom’s privatization of Social Security, discussed by Alan Budd and Nigel Campbell, is also interesting, because it appears to have been mostly unplanned. Two forces have led to effective privatization: first, the basic state pension was fixed in real terms (instead of increasing with wages, as in the United States); second, the government has gently encouraged voluntary switching to private plans. As a result, the United Kingdom will not have to face the same crisis that looms over other European countries and the United States.

Privatizing Social Security contains many excellent papers that analyze privatization both in theory and in practice, but unfortunately the authors, without exception, accept the premise of social security as given and unchallengeable. But why should the government force individuals to save more than they want to save? It is sometimes said that forced savings are necessary to counter the effects of another government program, the welfare system. According to this view, if individuals know that the government will take care of them in their old age, they will consume everything today and free-ride on the taxpayers later. Of course, some people will free-ride on the welfare system. But how many? Most people choose to work rather than take welfare benefits. Most also choose to save rather than rely on welfare benefits in their old age. It is difficult to believe that the costs of the free-riding that would occur in a voluntary system exceed the costs of the current system. Moreover, the welfare argument implies at most that individuals should be forced to save just enough to avoid becoming a burden on future taxpayers (along the lines of Britain’s basic pension). On the welfare argument, it is absurd to force people to “save” 12.4 percent of their earnings up to a high cut-off level. Should the rich be forced to save enough that they can retire in the state to which they have become accustomed? Eliminating Social Security altogether is not currently feasible, but political expediency is no excuse for avoiding fundamental questions.