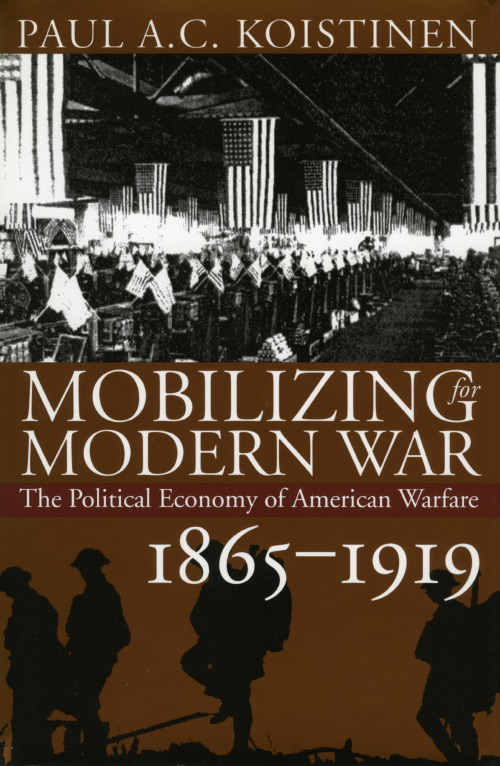 Mobilizing for Modern War
The Political Economy of American Warfare, 1865–1919
Paul A. C. Koistinen
Hardcover
This book review appeared in the Fall 1998 issue of The Independent Review.

Total war has been the costliest pastime of the total state in the twentieth century. Recognizing war as “the health of the state,” modern nation-states have enhanced their power by waging war, and they have achieved total power in part by successfully waging total war. The modern state’s ability to wage sustained total war depends directly on its ability to mobilize its physical resources over extended periods, demanding of its people as much of their labor and wealth as they will tolerate surrendering without rebellion. As Bertrand de Jouvenel observed at the end of the Second World War, under these conditions “the whole nation becomes a weapon of war wielded by the state; and the proportion engaged on warlike tasks is limited only by the need to keep it alive” (On Power [Indianapolis, Ind.: Liberty Fund, 1993], 165). Total war in the twentieth century has entailed the mobilization of industry, finances, and manpower, and even of the media, the arts, the academy, and the church. Every tangible and intangible resource has become a potential resource for warfare among governments unwilling to recognize the difference between soldier and civilian, public and private, war and peace.

In Mobilizing for Modern War, Paul Koistinen analyzes how the United States mobilized its industrial resources for defense and war from the Gilded Age through the First World War. This richly detailed volume is the second in a projected five-part series on the history of the political economy of American warfare. The goal of this ambitious series is, in the author’s words, to provide “a comprehensive, schematic, and interdisciplinary study of the economics of America’s wars from the colonial period to today” (p. x). So far, Koistinen has traced the pattern of mobilization through three stages of the American economy: the preindustrial colonial era; the early industrial nineteenth century (culminating in the Civil War); and now the more complex industrial age of the late nineteenth and early twentieth centuries. A forthcoming volume will cover the post–World War I era, including what should prove to be an important analysis of the Nye Committee.

Mobilizing for Modern War examines the impact of industrialization and technological innovation on American mobilization for defense and war. Koistinen traces how mobilization for war necessarily changed as post–Civil War America rapidly “matured” into a highly developed industrial capitalist economy. He argues that “industrialization and the rise of the corporate structure meant that mobilization of the economy for another major war would be significantly different from the process in the Civil War” (p. 102). He further contends that the Progressive Era’s “regulatory alliance” (p. 3) between big business and big government shaped the process of mobilization to the advantage of each. The “power elite” learned to coordinate mobilization in times of war and peace to advance the power and interests of both government and big business.

Koistinen does not seek to explain why America became an empire or why it went to war in 1898 and again in 1917 or how the nation conducted war on the battlefield and at sea, but rather to discern the pattern of the constantly evolving relationship between business, government, and the military in “harnessing the economy for hostilities” (p. ix). He looks at how the nation actually mobilized its robust economy for the sake of empire, defense, and war, and at how the public and private sectors—their boundaries increasingly “blurred” over time—learned to cooperate to those ends. The relationship evolved as each side adopted pragmatic, “makeshift” changes in response to actual experience, first in building a modern, professional, technologically up-to-date navy and army and then in mobilizing those forces and industry in the brief Spanish-American War and in the more protracted and demanding Great War. By stressing adaptation, experimentation, improvisation, and the “drift” of the process, Koistinen minimizes the ideological dimensions of the changing relationship between government and big business and points instead to the allegedly inevitable adaptation of mobilization to the environment of a rapidly emerging industrial economy.

Not surprisingly, then, the theme of inevitability is key to Koistinen’s thesis. He argues that the unprecedented industrial demands of modern warfare, particularly the technological revolution in warfare and the resulting intensification of war, required economic planning, because without it the government would have been unable to extract the necessary resources from the economy. Planning was unavoidable as the free-market system became an inadequate mechanism to coordinate supply and demand on such a scale and for highly specialized and complex war materiel. In the industrial age, “big business, big government, a professional military, and sophisticated weaponry combined to require economic planning during major wars or periods of extended conflict” (p. x). Moreover, “the quantity and sophistication of military demand meant that increasing and diverting civilian production was no longer adequate; market forces could not be relied upon” (p. 4). A new kind of warfare brought new demands on the economy, requiring a new response from government in order to mobilize national resources effectively, resulting in a planned economy in wartime and a minimized role for the market. In order to marshal the necessary resources quickly and in sufficient quantities, government had to find a way to set priorities, allocate goods, and fix prices. To do so, it turned to the business elite for voluntary cooperation and leadership, keeping the planning in the hands of civilians through such agencies as the powerful War Industries Board during the First World War.

Although it is a serious, methodical, and impressive scholarly work, Mobilizing for Modern War suffers from several weaknesses. Its effectiveness is hindered in part by the recurring assumption of the “inevitable” role of the Leviathan state in the industrial stage of war mobilization. Even the most alert reader will lose count of how many times phrases such as “had to be,” “necessitated,” and “forced to” appear in the book. Koistinen posits without substantiation that the Progressive Era’s creation of the modern regulatory, social-welfare state was necessary, that the United States would not have reached its full economic potential without it, and that business leaders who embraced economic planning were “enlightened” (pp. 11, 102, 214). He also makes various claims, as if they were self-evident truths, such as that a powerful President is “a necessity in a modern, complex society” (p. 14) and that the government was forced to nationalize the railroads during the First World War (pp. 221, 277). Moreover, he dismisses neo-Jeffersonian critics of the rising welfare-warfare state as impractical, unrealistic, or simply outdated in their thinking (pp. 293–94), an assessment consistent with his sense of historical inevitability.

More important, and contrary to its subtitle and to the promise of the introduction, Mobilization for Modern War is not a comprehensive study of the political economy of American warfare from 1865 to 1919. It is not a study of economic mobilization, but rather a narrower work about industrial mobilization. Despite the author’s attempt to summarize in several paragraphs other pertinent dimensions of economic mobilization, there is little discussion here of how the government financed the war through taxes, loans, and inflation—all means of extending state power in wartime. To be sure, J. P. Morgan and Company figures large in Koistinen’s revealing account of U.S. financial aid to the Allies from 1914 onward, but the banking industry, the Federal Reserve, and the Treasury Department play at best a tangential role in the rest of his story of mobilization after American entry into the war in 1917. As painstaking as Koistinen’s work is overall, anyone looking for a full treatment of the political economy of U.S. involvement in World War I will not find it here. We still await a comprehensive study of the problems Robert Higgs identified in Crisis and Leviathan (New York: Oxford University Press, 1987, 123–58), such as how the Wilson administration shifted the costs of the war, hid the true magnitude of the war’s costs from the politically volatile American public, and, by its seeming success in mobilizing the economy in a time of crisis, helped prepare the nation ideologically for greater government intervention in the economy in the future.

Between the Civil War and World War I, big business and big government found effective means to mobilize the nation’s resources to wage modern war, but at what cost to the nation’s traditions, republican political institutions, and free-market economy? If Koistinen is indeed correct that the demands of modern warfare have made centralized economic planning and a powerful executive inevitable, then he has given us all the more reason to fear the consequences inherent in total war to a free society’s economic and political institutions.