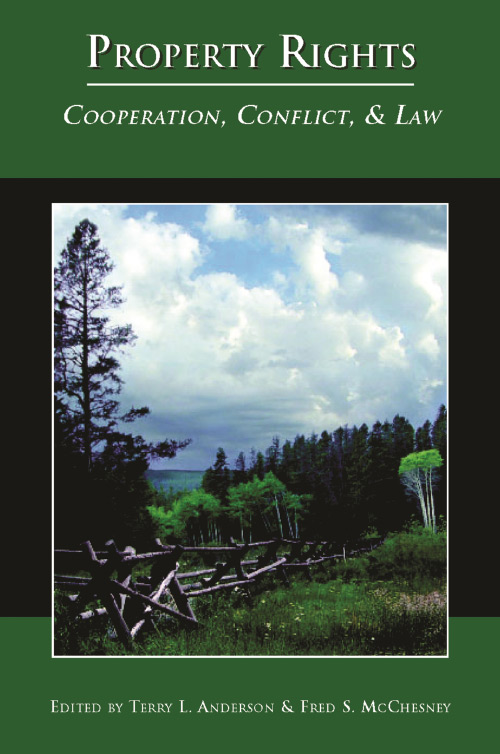 Generally ignored since the mid-1930s, the concept of property rights has reclaimed a prominent spot in both scholarly and public-policy debate. A series of Supreme Court decisions strengthening the constitutional doctrine of regulatory takings has both reflected and encouraged this renewed interest in property. State courts have also contributed to this development with rulings that protect private ownership of property by limiting the exercise of the power of eminent domain. In addition, international events have helped to rekindle concern for the rights of property owners. As Professor Carol M. Rose explains, “The collapse of socialist regimes has revived an interest in property rights all over the world, as once-statist nations consider privatization as a route to commercial and economic revitalization” (“Property as the Keystone Right?” Notre Dame Law Review 71 [1996], p. 329). Even the communist government of China has started to recognize private ownership.

As one might expect, the resurgence of interest in property has produced a vast literature. Scholars have considered the role of private property in the polity from a number of perspectives. Some have advanced the traditional argument that support for private property was essential for the enjoyment of political freedom (for example, Richard Pipes, Property and Freedom [New York: Alfred A. Knopf, 1999]). Others have examined the important role of property in shaping the American constitutional system (for example, James W. Ely Jr., The Guardian of Every Other Right: A Constitutional History of Property Rights, 2d ed. [New York: Oxford University Press, 1998]). Richard A. Epstein, in particular, has boldly championed economic liberty and argued that the redistributive program of the modern welfare state is unconstitutional (see, among other works, Takings: Private Property and the Power of Eminent Domain [Cambridge, Mass.: Harvard University Press, 1985]). Still other scholars have considered the definition of property for purposes of constitutional analysis (for example, Thomas W. Merrill, “The Landscape of Constitutional Property,” Virginia Law Review 86 [August 2000]: 885–999).

Most of the scholarship has viewed property rights through a historical or legal lens. In contrast, the essays assembled in Terry L. Anderson and Fred S. McChesney’s volume Property Rights: Cooperation, Conflict, and Law probe the nature and evolution of property ownership from an economic perspective. Although united by a common emphasis on economics, however, the thirteen essays in this volume, organized into six sections, treat different aspects of the complex process of defining and enforcing property rights.

The initial chapters concentrate on the advantages of having well-defined rights in property. Edwin G. West discusses the historical background of property rights, analyzing the work of John Locke, Adam Smith, Jeremy Bentham, and John Stuart Mill. He sets the stage by asking a pivotal question that recurs throughout the volume: Did rights in property preexist government, or did government create them? Yoram Barzel contributes to the debate over the nature and definition of the business firm and over how property rights operate in such organizations. Thráinn Eggertson notes the problems created by open access to natural resources, such as fisheries, and points out the distinction between open-access regimes and common property where members of a group manage resources and control the number of users. Louis De Alessi highlights the difficulties with open access and communal ownership, and asserts that individual ownership encourages higher investment in improvements. Arguing that the Endangered Species Act often produces a counterproductive outcome, he states that the failure to offer compensation to affected landowners “provides them with the incentive to resist and make the habitat less attractive to actual and potentially endangered species.” (p. 102).

Another group of chapters considers how property rights evolve. Terry L. Anderson and Peter J. Hill discuss the key part played by entrepreneurs in changing rules of ownership and in devising new property arrangements. They declare that the growth of property rights is an ongoing process and emphasize the role of technological change in revamping property rules. Gary D. Libecap contends that ill-defined property rights lead to poor economic performance. He examines situations in which private parties may be able to negotiate to formulate property-rights arrangements. David J. Haddock investigates the use of threats and the resort to force as means of defining and enforcing property ownership. He concludes that although government may adjudicate and record certain property rights, it “could not have been the origin of the first property rights” (p. 188).

The next essays explore ways in which the powers of government can secure or threaten private-property rights. Dean Lueck maintains that the basic notion of first possession serves as the source of ownership. He illustrates this point with both historical and contemporary applications of first possession in the laws governing land, water rights, wild animals, and oil and gas. Fred S. McChesney details problems created when government replaces private systems in defining property rights. He notes that governmental allocation of rights is likely to be swayed by favoritism and political pressure, resulting in inefficient determination of property rights. Even worse, according to McChesney, governments may be tempted to supplant private ownership and thus enhance their authority.

Two chapters consider attempts to control pollution through a property-rights focus. Bruce Yandle calls into question reliance on the command-and-control approach that relies on taxes and regulations to halt pollution. Instead, he asserts that market forces may induce bargaining to curb polluting activity. Harold Demsetz builds on Yandle’s analysis by considering how businesses might contract to solve the problem of external costs imposed on society at large.

The final chapters deal with the contested subject of government acquisition of private property. Richard A. Epstein decries abuses of eminent domain, taking special aim at the undercompensation of persons whose property is taken and the use of eminent domain for essentially private advantage. The result, he charges, is excessive reliance on eminent domain and diminished constitutional protection for private-property rights. Epstein also treats related issues arising from governmental power over the use and distribution of land or of other assets held as public property. William A. Fischel takes a close look at how local zoning may increase overall property values while imposing costs on individual owners. Observing that “[z]oning presents both an expansion and contraction of property rights,” he warns that “an open-ended regulatory regime also invites majoritarian rent-seeking by homeowners in those local governments” (p. 357). He argues that the regulatory-takings doctrine should curb majoritarian excess by requiring compensation where zoning is utilized to obtain community amenities, such as low-density housing, by in effect destroying landowners’ development rights.

Taken together, these essays contain numerous insights and sharpen our thinking about the relationship between economics and property rights. Two themes predominate and warrant further mention. The first is that private parties, not government, may establish property rights. This notion flies in the face of the prevailing conventional wisdom. As Lueck reminds us, “Typically we think of government as the source of property rights” (p. 200). Yet these chapter contain ample evidence that the concept of property ownership can often be traced to custom, first possession, and private contracting. This conclusion lends support to Locke’s famous contention that property rights existed before the formation of governments.

The second overarching theme in this volume concerns the vital importance of well-defined and secure property rights as a prerequisite for economic growth. The framers of the U.S. Constitution believed that security of property was vital for both political liberty and economic development. Conversely, as Haddock cogently states, “Government unwillingness to respect private property rights is the major source of deficient economic performance in many nations that are plagued by weak institutions and that lack a tradition of limited government” (p. 187). This crucial point underscores Davis S. Landes’s finding in his magisterial study The Wealth and Poverty of Nations: Why Some Are So Rich and Some So Poor (New York: Norton, 1998). Surveying different cultures throughout history, Landes emphasizes the connection between a high level of economic achievement in a society and that society’s protection of private property and enforcement of contractual rights. Along the same lines, Hernando de Soto has argued persuasively that Third World and former communist nations would enhance the growth rate of their economies by instituting a property system that eliminates obstacles to obtaining legal titles and thus facilitates the formal recognition of extralegal property arrangements. Such a step, he maintains, would encourage transfer of assets and capital formation (The Mystery of Capital: Why Capitalism Triumphs in the West and Fails Everywhere Else [New York: Basic, 2000]). Uncertainty over land titles and fear of property expropriation by government are twin evils that inhibit investment and productive activity.

Anderson and McChesney’s fine volume should help to enlighten property scholars about the economic contours of property rights. One hopes that it will prompt other scholars to revisit prevalent assumptions about the origins and nature of private property.