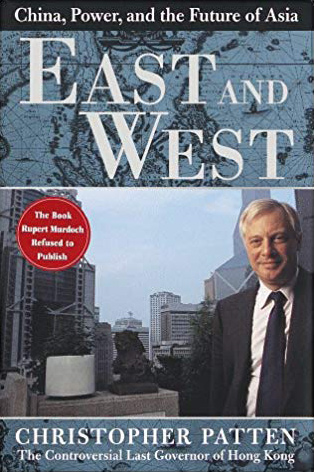 East and West
China, Power, and the Future of Asia
Christopher Patten
Hardcover Paperback
This book review appeared in the Summer 1999 issue of The Independent Review.

Reviewing Chris Patten’s book brings me personal pleasure in several respects. For one, it pleases me to encourage readers to buy and read a book that Rupert Murdoch refused to publish. In a highly publicized affair, one of Murdoch’s publishing houses pulled out of a contract for this book, shamelessly deferring to Beijing’s Communist regime. Given his media ambitions for East Asia, Murdoch clearly dreaded the regime’s displeasure at the publication of Patten’s thoughtful words. After all, the Chinese government had denounced Patten as “a prostitute for a thousand years” and a “tango dancer” during negotiations over conditions for the return of Hong Kong to China.

In any event, the work in question is a very readable book, full of insights about Asia, written by the last British governor of the prosperous crown colony. Some people have expressed disappointment that the book does not present more kiss-and-tell about Patten’s stormy relationship with the Chinese authorities, but that can wait for another day and another book.

I grew to admire Patten from a distance. While living in Europe, I followed his career in the Conservative Party and celebrated his efforts in securing a landslide victory for the Tories in the 1992 British elections. After falling out of favor with the good Queen Maggie, he was ignominiously dispatched to Hong Kong, where he might have given in to tropical torpor and occupied himself in enjoying the luxurious trappings of a colonial administrator. Happily for the people of Hong Kong, he did not do so.

I was in Hong Kong for the handover ceremonies and noted the dignity with which the entire Patten family conducted themselves. There was a great outpouring of appreciation and support from the local Chinese population. As the Union Jack was lowered for the last time, Chris Patten stood alone and uncovered in a monsoonal downpour before departing with Prince Charles on the royal yacht, Britannia. It was a dignified and moving event.

Later, I was in Hong Kong when Patten returned for the first time, to promote his book. I was impressed by how warmly he was received. Local residents of all nationalities queued for hours to shake his hand, give their well wishes, and seek his inscription on their books. One Chinese gentleman who had braved the throng was interviewed on the local television. It turned out that he could neither read nor speak English. But he wanted to have the experience, and he would place his signed copy on his shelf to be joined later by a Chinese translation. Wherever Patten went, he was mobbed by admirers on the streets. Even hard-bitten and cynical journalists gave him a warm and lengthy ovation when he appeared at a press conference at the Foreign Correspondents’ Club.

Glancing at the book’s index, a keen-eyed reader might suspect that my favorable review has been influenced by Patten’s laudatory reference to my own writing on “Asian values” and “Asian democracy” in the wake of my widely publicized dispute with the Singapore government. But Patten’s reference is indicative only of his wide-ranging interests in political developments in the region and his concern for individual freedoms. In evidence here is only a congenial meeting of minds.

During his five or so years as governor, Patten underwent a deep transformation that brought his classical liberal instincts to the fore. Although he might not be considered a full-fledged libertarian, his instincts led him to show considerable resolution in support of expanding personal, economic, and political freedoms for the people of Hong Kong. Thus, he passes muster far better than most politicians.

The good governor was also a quick study. The book is peppered with quotes from Asian philosophers and Western observers, each well chosen and to the point. Carefully woven into the text, these references do not appear as mere window dressings.

The book’s principal message is that the wide access to individual freedoms and an institutional framework to guarantee them lay behind Hong Kong’s success. Patten did his best to ensure that the agreements he forged with the Chinese would allow this oasis of freedom to survive. His efforts earned him the wrath of the Communists and the admiration of most of the people of Hong Kong. He initiated an expansion of democratic institutions that riled the Chinese and caused cynics to describe his efforts as a “poison pill.” If democracy is such a wonderful and necessary institution, why, they asked, did the British wait so long to provide it?

Interestingly, although colonial Hong Kong had virtually no democracy until its last days, it had extensive liberalism. Under the British, residents bore little cost by ignoring politics and had little to gain by political activism. Rights and freedoms were secure, so people could focus primarily on earning their daily bread or buying the bakery.

Under Hong Kong’s new masters, there is considerable insecurity about whether Beijing will be the same guarantor of rights that Westminster was in colonial days. Little wonder that people in Hong Kong seek more political protections now than they did before. Although Patten deserves some credit for providing them the means to do so, he should not be blamed for their desires.

Casting his net a bit wider, Patten exposes the proponents of “Asian values” as apologists for authoritarian rule. He stresses that it is inappropriate to attach regional adjectives when discussing essentially universal human values and human (individual) rights. Such references only reinforce racial divisiveness and do little to enhance our understanding of how Asia’s economies have developed.

Readers not familiar with recent developments in East Asia will find this fascinating book full of relevant insights. It also presents a principled, consistent, and compassionate argument for expanding individual freedoms. Resting his case on both individual and national interests, Patten pleads for “normalizing” relations with China, that is, for treating China the same as any other country. This implies the rejection of arguments that China’s exceptional history and culture require it be treated with greater deference. Patten correctly points out that caving in to repressive regimes is a dangerous path.

Unfortunately, Patten does nothing to dispel the enduring myth that Hong Kong is a free-market paradiseas indicated, for example, by the annual Heritage Foundation/Wall Street Journal Economic Freedom Index and by separate surveys by the Fraser Institute and the Cato Institute, which typically identify Hong Kong as the place with the most economic freedom. Consider a few inconvenient facts. In the past year the Hong Kong government intervened in the local stock market in defense of the local currency’s peg with the U.S. dollar. Moreover, upon spending $15 billion to purchase shares of local companies, the Hong Kong government became the single largest shareholder in the local market.

Even Hong Kong’s own Consumer Council worries about anticompetitive practices. It has identified cross-subsidization, exclusive dealings, price discrimination, resale price maintenance, and price fixing as some of the many abuses of market power. It has also pointed to low levels of competition in supermarket sales and gas supply. Interest rates on bank deposits of less than one week are still set by a banking cartel, as all interest rates were until only a year ago.

Perhaps the worst legacy of the British colonial presence is the land policy. The government owns all unused or undeveloped property, and doles it out in small parcels, keeping prices artificially high. Despite an ongoing recession and sharp falls in asset prices, recent adjustments have not been enough to remove Hong Kong from the top of the list of the most expensive cities in the world. Although this matter lay beyond Patten’s brief during his tenure as governor, neither he nor his highly competent civil servants did anything to break up this unique form of corporate welfare.

Happily, the foregoing policy faults have nothing to do with the book under review, which is a welcome change from the self-serving memoirs so often produced by former public officials. In his deftly written book, Chris Patten reveals himself to be a thoughtful human as he brings to life complex ideas and an interesting time and place.