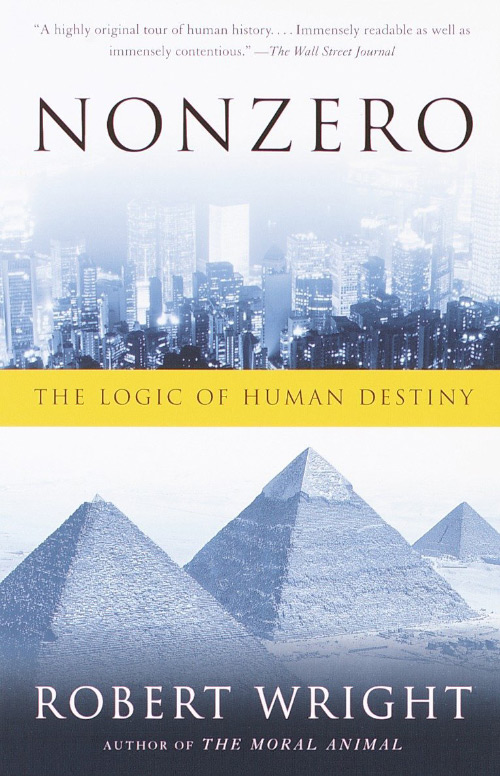 Nonzero
The Logic of Human Destiny
Robert Wright
Kindle Hardcover Paperback
This book review appeared in the Winter 2000/01 issue of The Independent Review.

In Nonzero: The Logic of Human Destiny, science writer Robert Wright argues that cultural evolution leads mankind to higher and higher levels of complexity, just as biological evolution does. Complexity is defined as, or perhaps attained through, an accumulation of situations in which cooperation produces gains for all parties involved, as in the positive-sum outcomes of what game theorists call “non-zero-sum games.” What one player gains is not at the expense of the other players. Biologically and sociologically, evolution is a win-win phenomenon.

Wright has little to say about the nature of game theory and other models of social complexity. Invented by John von Neumann, Oskar Morgenstern, and John Nash in the first half of the twentieth century, game theory was to revolutionize evolutionary biology and the social sciences. Its influence on economics and, more generally, on the rational-choice approach to human behavior is documented in a recent article by Roger B. Myerson (“Nash Equilibrium and the History of Economic Theory,” Journal of Economic Literature 37 [September 1999]: 1067–82). Game theory is now used in simulating social rules and evolution, as Robert Axelrod’s pioneering work The Evolution of Cooperation (New York: Basic, 1984) illustrates.

As a modeling tool for studying biological or social evolution, game theory is related to complexity theory and nonlinear dynamics. Complex social phenomena evolve from the behavior of individuals following local rules (see Sreekala Kochugovindan and Nicolaas J. Vriend, “Is the Study of Complex Adaptive Systems Going to Solve the Mystery of Adam Smith’s ‘Invisible Hand’?” Independent Review 3 [summer 1998]: 53–66). In the 1980s, Craig Reynolds’s famous “boids” gave this idea one kind of mathematical formulation. By following three simple rules of conduct related to their local environment (distance from, position, and direction of nearby boids), Reynolds’s computer creatures, without any central direction, closely simulated a flock of birds. Lacking the apparatus of mathematical simulation, Friedrich A. Hayek had anticipated Reynolds’s boids: he noted the “arrow formation of migrating wild geese” as an instance “in which presumably it is not an awareness of the overall pattern by the individual but some rules of how to respond to the immediate environment which co-ordinate the actions of the several individuals” (“Notes on the Evolution of Systems of Rules of Conduct,” in F.A. Hayek, Studies in Philosophy, Politics and Economics [London: Routledge and Kegan Paul, 1967], p. 69).

Which brings us back to Nonzero, where Robert Wright does once mention Hayek as “one of the first economists to view an economy as an information processing system” and “a hero of libertarians” (p. 199). The latter characterization is not strictly true, as the more radical libertarians find Hayek too conservative. But perhaps they should revise their opinions, given Hayek’s major contributions to the understanding of society as a complex evolving system in which central authority can do more harm than good. As we shall see, Wright also should have read Hayek more carefully.

In fields such as ethnology and evolutionary biology, Wright demonstrates a vast erudition. He tells how, from the first groups of hunter-gatherers through chiefdoms and up to societies with centralized political power (a state), social complexity has progressed. Growing population, higher capital investment, more extensive division of labor, and increased trade have generated stronger positive feedbacks. Political leaders help “not because they are public-spirited, but because neglecting the public welfare can diminish their own welfare” (p. 85). Wright correctly stresses the necessity that political power be decentralized and allow for the messiness that characterizes an innovative society.

History has a direction, argues Wright, and the growth of social complexity was inevitable. Whether this claim is true or not—a complex question, indeed—Wright makes many interesting points in this regard. Barbarian invasions contributed to complexity by breaking central rule and social rigidities, destroying empires, and creating new cultural experiments. From writing to printing, information technologies have worked for economic freedom against kings and priests. More recently, social complexity has received a boost from the new information revolution, which has greatly decreased the cost of communications. Wright argues that “advances in information technology are making Stalinist economics less tenable” (p. 199). But wait: it depends on what he means by “Stalinist.”

There is another way to read Nonzero. It starts with a recognition of political correctness and naïveté, which builds up as one proceeds through the argument. For example, the author reminds us that it might have been a woman who invented the rabbit net many thousands of years ago (“his or her,” p. 26), and he remarks on the “insane” people who “mistake dark-colored helicopters for attack aircraft sent by the United Nations” (p. 210) Perhaps it is true that the advent of chiefdoms and the rise of the state did help to lower the barriers of communications and trust and thus lead to greater complexity. Yet, in Wright’s perspective, blood-stained statehood is not only a historical threshold but a nursery of ethics to be emulated eternally.

Not only does the book fail to heed the public choice warning against glorifying political and bureaucratic processes, but it often peddles bad economics, such as the idea that wage increases could be mandated in poor countries without much threat to employment. If Wright had a good grasp of simple economic constructs such as the contract curve, which explains why free exchange is generally in the interest of both parties, perhaps he could have dispensed with the game-theory metaphor altogether and hence have avoided many economic errors.

The organicist metaphor creeps in early in Wright’s social theorizing. Information technology is “a nervous system for social organisms” (p. 177), “nations trade together” (p. 214), and “the superorganism [has] increasingly assumed planetary scope” (p. 192). “The comparison between society and organism,” he admits, “should certainly be kept on a leash” (p. 246), but he does not always heed his own caveat. He forgets at least one of Hayek’s objections: as opposed to cells in a biological organism, individuals in society “do not occupy fixed places . . . which they retain once for all” (F. A. Hayek, Law, Legislation, and Liberty, vol. 1: Rules and Order [Chicago: University of Chicago Press, 1973], 52).

If, to paraphrase Émile Faguet’s ironical critique of social organicism, the individual is a foot in the social organism (Le libéralisme [Paris: Société Française d’Imprimerie et de Librairie, 1902], p. 32), there must be a “collective intelligence” to make that individual move. The concept of a collective intelligence as social data-processing capability is not completely empty, as the Hayekian economics of knowledge illustrates. Wright’s conception, though, is closer to the “giant organic brotherly-love blob” that he sees in Pierre Teilhard de Chardin’s writings. Is Wright making an argument for a complex free society or for the historical inevitability of the Brave New World? Suspense.

In chapter 15, entitled “New World Order,” the suspense ends with the author’s landing in a black helicopter. This chapter and the following one dampen any sympathy we might have developed for an author trying to explain complicated concepts to an audience of granola intellectuals. He quotes a New York Times claim that “only the most dogmatic free market ideologues think the increasingly integrated global economy can get by without a super-national organization” (p. 212). We are in for a global tyranny intent on fighting transnational criminals, offshore tax evaders or libelers, and on preventing ozone depletion and global warming. Wright welcomes the prospect “that some supranational agency could demand to search your basement or your kitchen freezer” (p. 218), for you must chose between the “fear of dying in a biological weapons attack” and the “fear of having your freezer searched for anthrax by an international inspectorate” (p. 227).

The international inspectorate “could be constrained in various ways,” explains Wright. Of course, we live in a free country. “For example, American officials could accompany international inspectors to ensure that no evidence is planted” (p. 387). Question: Could one choose which official he would want to be present—between, say, Customs, Immigration and Naturalization Service, or Alcohol, Tobacco, and Firearms agents? In any event, better be docile and quiet: after all, we live in a New Age, and a prerequisite for social status is “not saying hateful things about whole national, ethnic, or religious groups, or even about other people” (p. 239). Okay, Mr. Wright, we love all tyrants.

The superorganism will come back to haunt us. Wright quotes a totalitarian goon in George Orwell’s 1984 who asks, “Can you not understand, Winston, that the individual is only a cell?” “But,” adds Wright in his self-righteous grandiloquence, “we’ll have chosen the life of a cell” (p. 235 in Wright, emphasis in original). After having so foreseen our future, Wright goes on to scold “human nature” in person: “Now,” he orders it, “get a grip on yourself” (p. 239). How pretentious for a social cell!

Perhaps Wright’s book is not completely useless. Perhaps it will introduce the New Age, politically correct crowd to some important ideas, such as the gains from trade, the evolutionary virtue of selfishness, and a tiny bit of the game-theory paradigm. And it raises the perennially fundamental issue of the continuity between man, society, and the universe.

Wright also asks interesting questions about artificial life. For example, how do we know that a computer network is not conscious just as an individual person is? The question would be more intriguing if it were raised by the network itself. Similarly, if the “question of transcendent planetary consciousness . . . is non-crazy” (p. 305), we would rather hear it directly from the horse’s mouth. Wright seems to forget—or perhaps, from his behaviorist perspective, he just cannot see—what distinguishes man from the rest of the known universe. As Erich Fromm observed, “Man may be defined as the animal that can say ‘I.’” The individual is not very good at being a cell in a collective blob.

Perhaps the state was a necessary institution at a certain stage in the development of mankind, given the way history had started to drift. It may be that even the most advanced stateless societies—medieval Ireland, for instance—disappeared because they could not develop social technologies conducive to the industrial and information revolutions. Who knows? But the question remains: After the state, what? Let us hope that the next stage is not the superstate tyranny Wright envisions. Do we need the Aztec inspectors “who prowled the urban markets in search of unscrupulous commerce,” the value-added-tax legacy of Genghis Khan, and the international jack-booted fridge-sniffer thugs?

After the state, what? I would venture the following speculations. The information revolution will greatly increase the efficiency of society as an information-processing mechanism. Complex social problems such as the production of public goods will become amenable to private cooperation and noncoercive solutions. “Social intelligence” will increase, yet individuals will continue to say “I.” Transitional problems may arise, with a few die-hard statocrats left hanging from lampposts, but, finally, Karl Marx’s and Auberon Herbert’s dreams will come true: the state will wither away. An anarchocapitalist utopia will be born. The twentieth century, the “century of the State,” as Mussolini so rightly called it, will have been only a dark, reactionary pause in the progress of mankind toward a peaceful, complex, efficient society of sovereign individuals.