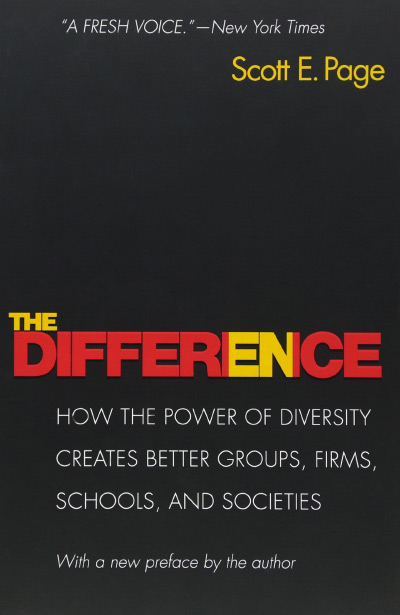 The Difference
How the Power of Diversity Creates Better Groups, Firms, Schools, and Societies
By Scott E. Page
Kindle Hardcover Paperback
This book review appeared in the Summer 2008 issue of The Independent Review.

During World War II, the British brought together approximately twelve thousand people at Bletchley Park, near London, to crack the German Enigma code, which they did—not once, but twice. Francis Crick and James D. Watson discovered the molecular structure of nucleic acid, the double helix, in 1953. And in 1962 Ringo Starr joined three other young men from Liverpool, England, in a pop music group that would become the most accomplished rock-n-roll band in history. What do all of these events have in common?

In each case, diversity trumped ability. No one person would have cracked the Enigma code even once, let alone twice. Could Crick have discovered the double helix without Watson, or Watson without Crick? Most historians of science would say not. The Beatles were certainly more than the sum of four moderately accomplished musicians. You get the picture. In all of these examples, people succeeded not by being brilliantly capable individually, but by leveraging their differences to achieve much more than they could have if they were acting alone.

How exactly does this amplification happen? What are its dynamics? Scott Page considers these questions in his fascinating book The Difference (the title was originally to be “The Logic of Diversity,” but Princeton University Press changed it for greater marketing appeal). This book combines analytical rigor, breadth of knowledge, empirical evidence, and amusing anecdotes in a engaging style that avoids the heaviness of the “primary” academic literature on diversity.

If I may be permitted to pick one literary nit, I found that Page’s humor occasionally slips from clever to silly, like those Dummies’ Guide to Einstein (or whatever) books, which are wonderful, but not necessarily owing to their humor. Unsophisticated humor does not play well alongside the otherwise sophisticated, even elegant logic of The Difference. But I digress along very subjective lines.

To move beyond anecdotes and formally argue that diversity trumps ability, we must say precisely what diversity means. (We must also define ability, but we’ll do so later.) Page defines diversity as differences in how we represent or encode situations and problems (perspective diversity) and in how we generate solutions to problems (heuristic diversity). A perspective is an internal language for representing a problem, an encoding. Differences in perspective may reflect many factors related to training and experience—even racial or ethnic influences, a subject to which we shall return. The heuristic is a rule (or rules) one applies in searching for a solution. Heuristics are essentially methodological, the ways in which persons go about solving a problem, their “bag of tricks.” Different heuristics imply different formal methods of analysis, determined largely by one’s training and education. The solution one identifies depends on the interplay of perspective and heuristics—that is, on the problem solver’s “perspective/heuristic pair.”

The group collectively has an advantage over the single problem solver because many different perspective/heuristic pairs lead to the consideration of more potential solutions. When one member of a problem-solving group gets “stuck,” another can come at the problem from “a different angle” and push the group closer to the optimal solution. (Another Beatles hit is born.) The group’s diversity trumps the ability of any individual in it. Moreover—and this point is both counterintuitive and very significant—a diverse group of moderately capable problem solvers can often outperform a group composed entirely of experts. This diversity-trumps-ability conclusion is the major theme of The Difference.

This remarkable book is chock-full of insights and surprising implications, but precisely for this reason it also runs the risk of being misinterpreted in various ways, especially by those who read it through ideological lenses or, more commonly perhaps, read it too casually. For example, some readers might get the impression that Page is not playing fair with his assumptions, that he is “rigging the game” to push an egalitarian, antielitist agenda—specifically, that he deliberately populates his models with agents whose abilities are defined so as to guarantee that diversity trumps ability.

The attentive reader will appreciate, however, how carefully Page qualifies his conclusions; in point of fact, he does not maintain that diversity always trumps ability. There are two issues here, one logical and the other empirical. Page clearly explains that the diversity-trumps-ability conclusion holds only if the problem is difficult—that is, a problem for which no individual problem solver always locates the global optimum. As a matter of logic, the “rigging-the-game” argument does no damage to the model because it allows one to define ability so as to make the problem nondifficult. However, as a matter of practicality, the extent to which diversity actually trumps ability is an empirical question, which Page confronts head on.

Throughout the book, Page offers anecdotal evidence of diversity’s value, but in a chapter aptly titled “The Empirical Evidence” he reviews more systematically the academic research into the effects of diversity. The literature is voluminous, and he presents a fair and balanced overview. The evidence essentially shows that diversity does bring expected benefits, but not always and not always very strongly when it does. Diversity’s power depends in part on the situation. If we look exclusively at firms that innovate, we do find returns from diversity, but there is no evidence and no reason to expect that diversity behind the counter at Burger King leads to a better way to slice onions or spread ketchup. Page concludes, fairly I believe, that the benefits of diversity are real in no small number of situations and that they are worth pursuing within a reasonable cost-versus-benefit framework.

Does Page advocate the “diversity” of political correctness? Here again, the casual or the ideological reader might be given to false inference. As usual, Page treats the issue with caution, fairness, and a much needed dose of clear thinking.

Diversity in the context of political correctness means different things to different people, of course, but those who equate diversity with feel-good notions of inclusiveness and sensitivity or “payback” affirmative-action policies should pay special attention to Page’s discussion of identity diversity, which refers to differences related to the racial, cultural, religious, gender, and other “identities” into which we sort ourselves (and each other). This type of diversity is not, strictly speaking, the sort of cognitive diversity formally modeled in the logic of diversity. Page carefully points out that for identity diversity to operate positively in his analysis, it must correlate with cognitive diversity. Whether identity diversity thus results in better group performance is another one of those empirical questions. Across many studies, the evidence is that on average the performance of identity-diverse groups and that of homogeneous groups is roughly the same. However, studies also show that in situations where creativity and innovation are especially important, identity-diverse groups do often excel.

But the ledger has two sides, and there must be offsetting entries in the negative column if average performance turns out to be no better for identity-diverse groups. Identity diversity sometimes leads to problems with group dynamics to the detriment of group performance. Studies have shown that mixing identity groups can lead to uncooperative behavior, communication problems, and other unintended consequences that swamp any gains owing to cognitive diversity.

This is not to say that affirmative-action policies designed to encourage diversity are necessarily undesirable. Page certainly draws no such conclusion; in fact, he seems to come down on the other side: “[W]e just haven’t figured out how to get along . . . and when we do, diversity improves performance. We just have to get on those bikes and learn to ride” (p. 328). Cognitive diversity is presumably then free to work its magic unencumbered by racism, sexism, ethnocentrism, and all the other “isms” that undermine the cooperative enterprise. A modicum of empirical support justifies this optimistic presumption. Nevertheless, one wonders if learning to get along implies eventually losing also the cognitive differences we wish to exploit.

The Difference explores such a variety of topics (as its title suggests) and offers so many marvelous insights that I cannot possibly do justice to all of them here. Yet, despite its breadth, the author commits one serious sin of omission: he does not develop the implications of “diversity trumps ability” in the context of the debate over capitalism versus socialism, free markets versus central planning, F. A. Hayek versus Oscar Lange. In a previous issue of this journal, I explore this subject (“Hayek Revisited: Diversity, Planning, and the Vox Populi,” Independent Review 12, no. 1 [summer 2007]: 47–70). The thrust of my argument is that diversity models lend formal support to Hayek’s less formal, but enormously incisive discussions of the use of knowledge, the efficiency of markets, and the deficiencies inherent in economic central planning. The market’s diversity trumps the planner’s ability. I hasten to add that this thesis is my own, and it does not necessarily reflect the economic or political opinions that Page himself may hold.

The Difference is a very good book. I recommend it to all intelligent readers, especially to those who have not gone beyond the “diversity” of political correctness. As Bill Miller says on the book’s dust jacket, “[I]f you haven’t read it, you are just talking metaphor.” Read this book.

Will C. Heath
University of Louisiana at Lafayette
Culture and SocietyEntertainmentGovernment and PoliticsPolitical History
Subscribe Buy This Issue Get the App