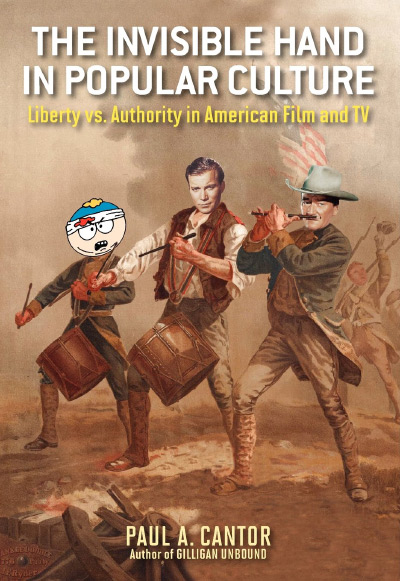 The Invisible Hand in Popular Culture
Paul Cantor
Kindle Hardcover
This book review appeared in the Summer 2013 issue of The Independent Review.

“Television rots your brain.” That’s a refrain many of us grew up hearing, but it isn’t true. So suggests Paul Cantor in The Invisible Hand in Popular Culture, his second book about American film and television.

Cantor has become a celebrity within libertarian circles. He is Clifton Waller Barrett Professor of English and Comparative Literature at the University of Virginia and recently became a visiting professor at his alma mater, Harvard University. What’s remarkable about his appointment at Harvard is that it is in the Department of Government, not the Department of English. That doesn’t surprise those of us familiar with his breadth of knowledge and range of interests.

Recognized as an interdisciplinary scholar, Cantor attended Ludwig von Mises’s seminars in New York City before establishing himself as an expert on Shakespeare. Besides publishing extensively on literature of various genres and periods, he has been a tireless advocate for Austrian economics, even though Marxist theories and their materialist offshoots dominate his field. In 1992, the Mises Institute awarded Cantor the Ludwig von Mises Prize for Scholarship in Austrian Economics, and his work at the intersection of economics and literature resulted in Literature and the Economics of Liberty (Auburn, Ala.: Ludwig von Mises Institute, 2010), which he edited with Stephen Cox (while contributing nearly half of the book’s contents).

Like that work, The Invisible Hand in Popular Culture owes much to the theories of Friedrich Hayek, in particular the concept of spontaneous order. It is a reflection of spontaneous order that the most beloved films and television shows did not spring perfectly from the mind of some genius working in complete isolation. Rather, they emerged out of the complex interactions between producers and consumers and the collaborative efforts of scores of diligent workers. Viewer feedback facilitated modifications and improvements to films and television, which advanced in meliorative stages.

Hayek discusses spontaneous order to refute the belief that government intervention and central planning ought to force order onto the marketplace. Cantor discusses it to refute the belief that artistic creation stands outside of commercial exchange. Examining depictions of freedom and coercion in a wide variety of films and television shows, he highlights the disparity between elitist and populist understandings of American culture, which he links to “top-down” and “bottom-up” models of order, respectively. His position is that the popularity and artistic appeal of film and television appear to be proliferating despite the objections and insults levied by the cultural elite, who, it should be added with not a little irony, nonetheless probably watch a great deal of television.

Against the cultural elite and their promotion of patrician—and mostly European—standards for the arts, Cantor maintains that the marketplace enables creative and experimental forms of expression that aren’t so different from earlier aesthetic media such as the serialized novel or popular plays. He reminds us that “nineteenth century critics tended to look down on the novel as a popular form, thinking it hardly a form of literature at all,” and adds that it “was not viewed as authentic art, but rather as an impure form, filled with aesthetically extraneous elements whose only function is to please the public and sell copies” (p. 7). This once “vulgar” medium has lately been celebrated as one of the highest and most impressive categories of art. The form and content of great American novels—whether by Twain or Cooper or Salinger or Pynchon—should remind us that popular novels have been elevated as canonical even though they have rejected the standards and conventions that highbrow critics insisted were necessary for a work to constitute “literature.” Twain and Cooper recognized that highbrow presuppositions and expectations for novels derived from influential Europeans, so they set out to forge a uniquely American literature free from Old World constraints.

Because film and television are commercial, they allow ordinary Americans (as opposed to academics and the cultural elite, including and especially the neo- Marxists) to determine aesthetic standards and trends by indicating what does and does not interest them. Authors and television producers, in turn, become responsive and attuned to the demands of their consumers; they become, in short, entrepreneurs who must struggle against the status quo, defy the odds, and push the limits of artistic acceptability.

The elite disparage this process and advocate for aesthetic criteria divorced from the tastes and pleasures of the general public. As Cantor explains, “Elitists who profess to believe in democracy nevertheless have no faith in common people to make sound decisions on their own, even in a matter as simple as choosing the films and television shows they watch” (p. xiv). The elite would have film and television removed from the marketplace, but without the marketplace there would be no film or television.

Films and television shows might just become the masterpieces of the future; they might have already provided us with canonical “texts.” It is too early to say whether they have contributed substance to what Matthew Arnold called “the best that has been thought and said.” Greatness, after all, takes time to ascertain.

Orwell, Dr. Johnson, and Hume adhered to the “test of time” measure of greatness by which a work of art or literature is evaluated according to its ability to compete and survive in the literary marketplace over the course of generations. This measure requires the sustained consensus of consumers as opposed to the esoteric judgments of elite critics. A work’s ability to attract vast and diverse audiences and to do so long after its production is what makes the work great.

It might seem odd to think of Cantor’s subjects—South Park and The X-Files, for instance—alongside important literary works of the Western canon. And yet the groundlings who paid a penny to enter into the pit of the Globe Theatre, where they would stand and watch performances of Shakespeare’s plays, probably didn’t think they were witnessing greatness, either. Harold Bloom once said, “Cultural prophecy is always a mug’s game,” and Cantor is wise not to prophesy about the enduring merit of any films or television shows. Cantor’s point is not that the products of film and television will be considered masterpieces one day, only that they might be.

For the record, I consider it extremely unlikely that South Park or The X-Files will achieve classic status, but I would not extend that speculation to such films as Casablanca or the Star Wars trilogy. Cantor himself takes pains to distinguish first-rate works from run-of-the-mill entertainment by invoking “traditional criteria for artistic excellence” (p. xxii). We should not take him to mean that film and television are media superior to that which came before them; instead, he considers them as substantially similar to their artistic antecedents, except that their features signal an evolution in artistic preferences. The allure of art comes not from its alienation from popular culture, but from its ability to incorporate popular culture in ways that do not impede its power to speak beyond its moment.

To be sure, American film and television have produced an overwhelming amount of trash, but so did novel serialization. Not all novelists who published their work in contiguous installments in magazines and periodicals held the stature of Charles Dickens or Henry James or Herman Melville. Cantor points out that we forget about the thousands of bad novels from the Victorian era and extol only around one hundred novels from that period, which supposedly represents a zenith in culture. Among the thousands if not millions of films and television shows that have been produced over the past century, perhaps a few will rival the works of Dickens, James, and Melville.

If Cantor weren’t such a generous and careful scholar, he might have become the beˆte noire of sophisticates and lambasted in the pages of The New Criterion for his embrace of the purportedly lowbrow. His command of economics and literary history, however, has spared him from such condemnation and even gained him a devoted following. To do justice to his latest book would require a more comprehensive treatment of his arguments about the figure of the “maverick” in film and television or about the value of collaborative work and coauthorship in generating exceptional products. Yet these arguments demand more attention than a review can give.

The incomparable Cantor has blessed the libertarian movement with a literary voice. He has expanded the study of Austrian economics into the fields that need it most. He himself is a maverick, reading and writing industriously to break up the habits of thought and monopolies on ideology that mark literary scholarship. Would that we had more Cantors to show us how literature flowers when freedom flourishes. There is hope in the idea that artists can turn to the market to cultivate their talents and supply us with the arts we demand. No English department or cultural guardian can rob us of the entertainment that we enjoy.