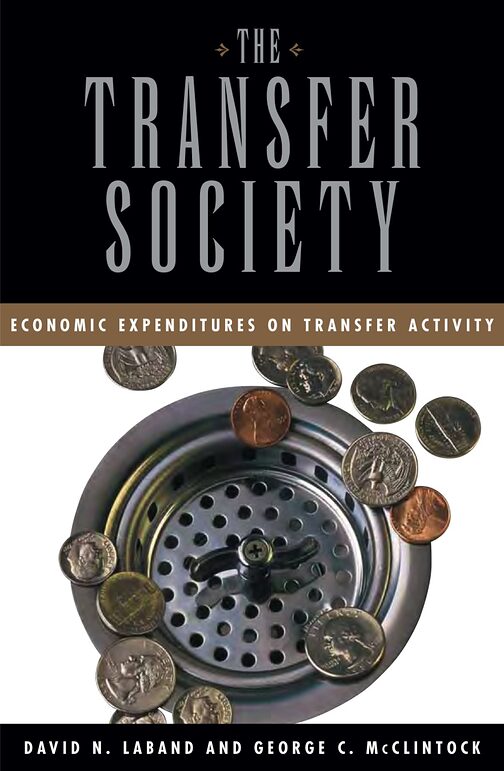 From advertising descriptions of this small book (eighty-three pages of text) by David Laband and George McClintock, one is led to believe that The Transfer Society estimates what economists have come to refer to as rent-seeking costs. The authors themselves do not use this term until late in the book (chap. 5), and it is not clear whether they regard all the costs they have identified and estimated as rent-seeking costs or as something else. Whatever the costs are called, the magnitude is startling—approximately $549 billion in 1997. The “transfer society” is apparently far more costly than most of us had suspected.

Or is it? The authors’ estimated costs fall into some twenty different categories, and the five largest categories, accounting for nearly three-fourths of the total, include: national defense, $154 billion; police, $33 billion; commercial corporate, government, and institutional security, $72 billion; tort litigation, $92 billion; and federal and state tax loopholes, $51 billion.

Who would have thought that $154 billion in defense expenditures would be considered rent-seeking costs? (This amount is not total national defense spending, which is $253 billion, but only the amount somehow estimated as the “minimum defense expenditures required to safeguard Americans’ domestic security against attack from foreigners” [p. 27].) I had thought that rent-seeking costs were simply the resource costs of attempts to influence legislation, but it is clear that the authors have a much broader concept in mind because almost none of their costs fits that definition. Although I cannot locate a clear-cut statement of what type of costs they are attempting to identify in their figures, perhaps this statement from the introduction provides an indication: “individuals devote enormous amounts of time, money, and other resources to influence the distribution of income and wealth. This activity occurs in every country in the world, including (perhaps especially) the United States, and takes two forms: attempts to appropriate other persons’ wealth, and attempts to prevent other people from appropriating one’s own wealth” (p. 1). It is true that most (but not all) of the costs they identify seem to take one of these two forms.

To some degree, defense expenditures clearly are intended to protect our wealth from foreigners (although protection of our lives and freedoms also would seem to be important), and so national defense expenditures fit the definition Laband and McClintock appear to have in mind. Similarly, the police and private security expenditures protect against theft from fellow citizens, as do expenditures on locks. (Roughly $6 billion was expended on locks in 1997, of which we are told that $3,256,520 involved snowmobile locks [p. 23].)

Once the authors have adopted this definition and identified $549 billion in associated costs, a relevant question to ask is: What is the significance of these costs? At numerous points throughout the book, the authors use phrases such as “socially wasteful,”“dead-weight loss,” and “to the detriment of society as a whole,” leaving the impression that they believe all these costs are welfare costs (or deadweight losses). I do not know whether they intend this meaning (some passages I find ambiguous), but in any event few economists would consider expenditures on national defense and police as totally wasteful. Indeed, certainly from an all-or-nothing perspective, these activities probably produce the greatest welfare gains of anything governments do. If Laband and McClintock simply want to point out that achieving the benefits of these policies entails costs, that conclusion is true but not especially novel or interesting.

With regard to some categories of costs, Laband and McClintock make clear that they view these costs entirely as welfare costs. Consider this statement regarding locks: “When ‘the law’ recognizes and ostensibly protects our legal rights to ‘our’ property, the money we nevertheless spend for locks, safety deposit boxes, and so forth represents dead-weight loss” (p. 15). I don’t know what concept of optimality (the deviation from which is a welfare cost) they have in mind here that leads them to think expenditures on locks are wasted. In my view, an optimal system of protecting private property certainly would involve resource commitments by both government and individuals, and I see nothing obviously wasteful in individuals’ taking prudent protective measures—doing so is certainly more efficient than having the police guard our homes twenty-four hours a day.

One of the intriguing aspects of the literature on rent seeking is that it has identified a new type of welfare cost associated with governmental transfers of income. As Gordon Tullock put it, “The transfer itself may be costless, but the prospect of the transfer leads individuals and groups to invest resources in attempting either to obtain a transfer or resist a transfer away from themselves. These resources represent net social waste [that is, a welfare cost]” (“The Cost of Transfers,” Kyklos 4 [December 1971], 643). This type of resource cost is recognized widely now as a welfare cost, but very few if any of the costs identified by Laband and McClintock resemble it. Indeed, only lobbying costs (a paltry $7.5 billion out of the total of $549 billion) may represent rent-seeking costs in the Tullock sense.

At least one item in the authors’ tabulation is a welfare cost, the $51 billion in the “tax loopholes” category. Actually, this figure includes only expenditures on tax preparation and the time and resources devoted to keeping records, filling out forms, and so on. These expenditures are what we normally call the compliance costs of taxation. Because this cost on the taxpayer is in excess of the revenue the government receives, economists correctly view it as a welfare cost. It is not clear, however, how this case fits Laband and McClintock’s own definition. They presumably view compliance with the tax laws as “attempts to prevent other people from appropriating one’s own wealth” because they ask: “Is it really the case that avoiding taxes has become a $50 billion plus annual industry in America? Absolutely” (p. 56, emphasis in original). My tax accountant would be surprised to learn that we were attempting to avoid taxes rather than simply to comply with the law. A welfare cost, yes, but not a rent-seeking welfare cost.

Those who read this book in the expectation of finding empirical evidence that rent-seeking costs (in the conventional sense) are large will be disappointed. Instead, they will find an itemization of costs they never took to be rent-seeking costs, most of them not wasteful at all.