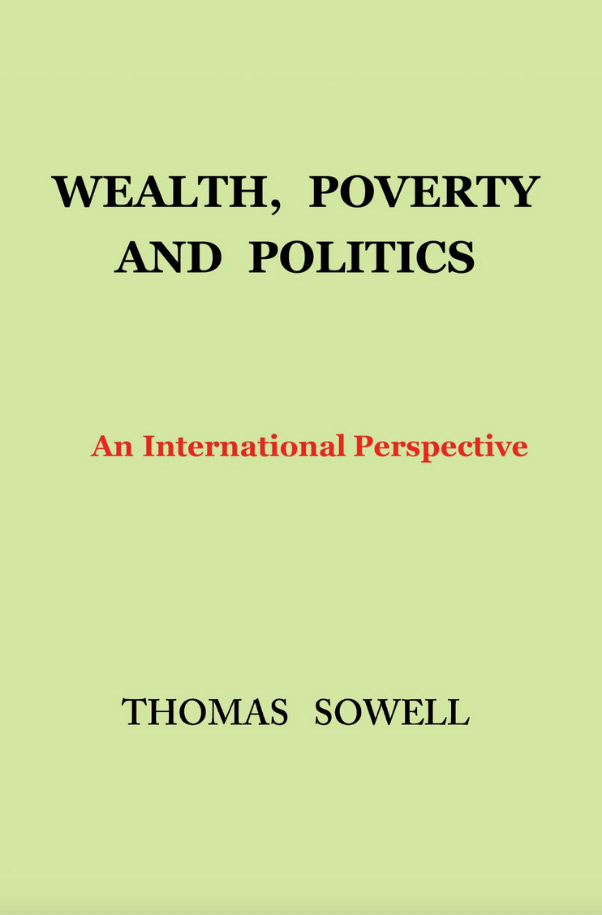 Wealth, Poverty and Politics
An International Perspective
By Thomas Sowell
eTextbook Hardcover Audiobook Audio CD
This book review is a web exclusive for the Winter 2015/16 issue of The Independent Review.

In Wealth, Poverty and Politics, Thomas Sowell delves into the multifarious geographic, cultural, social and political reasons why vast differences across people in virtually every area are to be expected, particularly in their potential for production for others, which creates income and wealth. Then, with careful attention to logic and a far wider range of evidence than typically considered, he develops an overwhelming case against certain commonly-held premises that misinform us in critical ways, and whose implications impose adverse consequences on society.

Sowell puts the illuminating results of his serious detective work into a short book full of well- documented “why didn’t I think of that?” insights. (The 58 pages of notes that accompany the 242 pages of text demonstrate Sowell’s thoroughness.)

The book focuses its attention on the logic and evidence for three widely held, though incorrect core premises:

*Deviations from income and wealth equality are commonly interpreted as unnatural and unfair, requiring blame and coercive “solutions.” Sowell demonstrates the problems with that “presumption of equal outcomes in the absence of malign actions” (p. 234). Equality in any area of human achievement should never be expected, and has never occurred, much less forming the standard from which deviations must be demonized and coercively undone.

*Policy issues are often approached as if wealth was the natural condition, so poverty needs explaining. Sowell observes that “Poverty occurs automatically. It is wealth that must be produced, and must be explained” (p. 177). That poverty results from low productivity does not require explanation. Further, low productivity does not imply that some external party is to blame. The too infrequently achieved set of circumstances behind high productivity and generated wealth are what needs explaining.

*Unequal incomes are frequently treated as the “big” public policy issue. Sowell explains that what matters most for society’s well-being is actually the value of goods and services produced for others. When arrangements are voluntary, higher incomes correspond to greater productivity for others—help rather than harm—so that when a society “goes after” those with higher incomes, it punishes itself.

I was particularly impressed with Sowell’s chapter on geography. With transportation and communication —access to people, goods, services and knowledge—central to productivity, Sowell shows the many important ways location predictably changes productivity and incomes. The variations in potential water transport—by far history’s cheapest shipping mode–are dramatic. Are there good natural harbors? Are there slow enough rivers? Are they deep enough year-round? Do they remain navigable for long distance shipment? And interactions are important too. Do the rivers connect productive lands to good harbors, and further, to advanced societies? The resultant massive variations in access to ideas and culture, as well as goods and services, overwhelm any expectation of equality of productivity, and hence of equal incomes or wealth. That is true of nearby locations (e.g., mountains versus lowlands) as well as widely-separated ones.

Sowell’s focus on the interactions among variables is particularly insightful, contrasting sharply with the overly simple victimhood explanations that are common—e.g., “we are poor only because the rich are exploiting us.” His discussion reveals the incredible complexities involved, where one change can trigger huge effects where it eases a binding constraint and other conditions are favorable, yet have very little effect where either is not the case, as when creation of the compass dramatically changed the importance of access to the Atlantic versus the Mediterranean.

Of course, the complexity is amplified by many other sources of widely different productive potentials. Sowell also incorporates other historically important geographic features, such as mountains, valleys, deserts, and soil types. Other natural differences, such as the amount and variability of rainfall and the presence or absence of beasts of burden have also played a role. Social and political variables add to the mix, including language differences, population, demographics, mobility, and welfare systems.

Sowell identifies the most important variable of all as culture and the human capital it gives rise to, echoing David S. Landes’s conclusion that “If we learn anything from the history of economic development, it is that culture makes almost all the difference.” [David S. Landes, “Culture Makes Almost All the Difference,” Culture Matters: How Values Shape Human Progress, edited by Lawrence E. Harrison and Samuel P. Huntington (New York: Basic Books, 2000), p. 2.] As Sowell ably demonstrates, people’s “cultural universes” vary widely. Differences in trustworthiness and discipline, the willingness to work hard, save and pursue productive education opportunities, openness to learn from others who are more productive or to go where opportunities are greatest all differentiate different groups’ abilities to be productive for others. Superior cultural characteristics translate into superior human capital. But, unfortunately, that superiority cannot be artificially created among people with very different attitudes.

He also brings out a long history of resentment against “outsiders” who become more successful. Fanned by demagogues, it frequently leads to mistreatment and even expulsion of those who have worked, learned and saved their way from being virtually penniless newcomers to being supposedly “privileged,” because of their earned superiority. Societies that hamstring the benefits such superior producers provide directly to others in society, and the model of improvement they provide for emulation, rather than being receptive to the ideas and practices that result in superior performance, are choosing the path of isolation, which is the path of impoverishment. It punishes them with a “lack of knowledge of things known to others,” (p. 46) and the undermined access to accumulated knowledge, productivity and culture saps their productivity and income earning potential.

Sowell neatly encapsulates the difference between such political abuses and his approach when he notes that “When you want to help people, you tell them the truth. When you want to help yourself, you tell them what they want to hear.” (p. 197) Given that “wrong premises seldom lead to correct conclusions,” true wealth-creating progress requires that “we must first know the truth” so that we are not led astray by “arbitrary premises that are demonstrably false and misleading.” (p. 208) As a consequence, societal advance requires “putting the burden of proof on those who seek to restrict the freedom of their fellow human beings to live their own lives and make their own economic decisions as they see fit.” (p. 216)

Thomas Sowell has few, if any, equals at unearthing overlooked incentives and evidence that bear on crucial issues. He thinks carefully and creatively through widely held premises and the narratives they support, bolstering his analysis with a vast array of evidence that offers insights for the intellectually curious (e.g., the interrelationships between ship sizes, draft animals, wheels, and economies of scale in production), but which remain unconsidered by those heavily invested in false narratives. He has long heightened my appreciation of good research and well-constructed arguments, allowing what is unnoticed by others to produce more accurate and sophisticated understanding, while revealing the holes in what is falsely imagined to be true. Wealth, Poverty and Politics adds still more reasons that justify that appreciation.