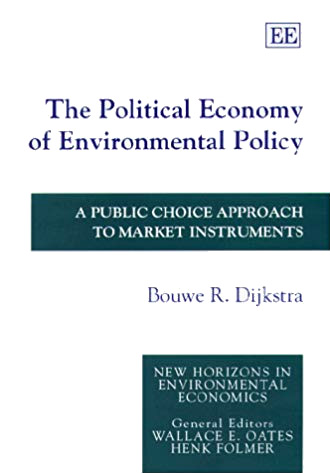 The Political Economy of Environmental Policy
A Public Choice Approach to Market Instruments
Bouwe R. Dijkstra
Hardcover
This book review appeared in the Winter 2000/01 issue of The Independent Review.

Given the broad nature of this book’s title, the reader is struck first by its very narrow focus, even within the confines of the subtitle. As a consequence of his narrow focus, the author unjustifiably and inexplicably ignores important policy alternatives currently being discussed in the field of environmental economics. Ultimately his purpose is to develop a rent-seeking explanation of why direct regulations are invoked more frequently in environmental policy than economic instruments (narrowly defined), even though most economists claim that the latter are “efficient” or “welfare maximizing.” However, as I argue here, even this narrow exercise is compromised and may even be suspect because the underlying suppositions embedded in framing the problem may not be accurate.

As noted, the omissions in the book are glaring. On page 1, the reader is informed that “instruments of environmental policy” are divided “according to three ways in which a government can influence an agent’s behaviour”: direct regulation (command and control), market or economic instruments (tradable permits or pollution taxes), and suasive instruments (education, training, and so forth). I was immediately struck by the fact that this list completely omits the definition and enforcement of property rights as tools of environmental policy. In fact, in more than three hundred pages, Dijkstra does not discuss property rights and their relationship to environmental policy or mention seminal writings by Ronald Coase, Garret Hardin, or any of the more contemporary property-rights analysts such as Richard Stroup, Terry Anderson, Donald Leal, P. J. Hill, or Bruce Yandle. As a result, he inexplicably ignores all the research done primarily by economists in the field of free-market environmentalism (FME). This literature focuses on how the lack of clearly defined property rights has caused most environmental problems and how a clearer definition and enforcement of property rights, possibly through common-law adjudication, would be the best—that is, the most efficient—way to deal with such problems. Even if the author viewed FME as unimportant in terms of actual public-policy considerations, he should have discussed the subject in order perhaps only to dismiss it. Indeed, this approach is the author’s way of dealing with so-called suasive instruments.

Recognition of the FME approach suggests a philosophical and methodological partition between possibilities in the “political economy of environmental policy” that ought to be recognized in any book on this subject. Even though pollution taxes and tradable permits are often referred to as market-based instruments and are contrasted with nonmarket-based command-and-control policies, this juxtaposition reveals only a squabble over how best to implement a central plan. In each case, within a range of possibilities, a central government authority determines the desired outcome. This approach should be contrasted with the comparative-institutions approach taken by FME’s advocates, who argue that central planning via “publicly owned” resources, as opposed to the decentralized planning of the free market, is the primary cause of negative externality problems. Environmental problems arise because property rights are not clearly defined or, if defined, are not effectively enforced; hence, the full costs of resources do not properly enter into the calculations of suppliers and demanders operating in a free market. The solution consists in the privatization of government-managed resources and the more complete enforcement of existing private-property rights violated by polluters. The economic efficiency arguments for FME are those made by Hayek and others for capitalism in general, as opposed to socialism. The partition, then, is between policies intended to implement a government-orchestrated central plan—that is, both command-and-control instruments and the so-called market-based instruments of pollution taxes and tradable permits—and policies intended to allow capitalism to operate more completely—that is, privatization and property-rights enforcement.

Once we recognize this omission in Dijkstra’s approach, we have to acknowledge the truly limited nature of his exercise. Essentially, it is as follows: “If we are going to have centrally planned outcomes for the environment, most economists believe that those outcomes will best be achieved by the use of pollution taxes or tradable permits. Why then do such policies tend to be rejected by real-world central planners?” If your concern is “efficient” central planning, then this question might be interesting. But if your concern is for the efficient use of resources in a more general sense or, from a more philosophical perspective, for the advancement of liberty, then your overriding concern would be how best to advance free markets, as opposed to central planning, in dealing with the environment and with natural-resource usage more generally.

Even if we accept the author’s narrow focus, however, his hypothesis and his book in general still have fundamental shortcomings. First, his review of the literature on the efficiency of alternative policies has at least one gaping hole where it ignores the entire body of work on the relationship between property rights and the environment. If Dijkstra had recognized that literature, then he could not have taken as given the efficiency case for pollution taxes and tradable permits. There is at least an equally valid efficiency case for FME. It is surprising that this project could have made it through both a dissertation defense and the editor’s peer-review process without attention being drawn to this omission.

Moreover, Dijkstra’s hypothesis accepts as an empirical fact something that seems to be simply an impression on his part and not necessarily true. His premise is that public-policy makers have ignored the economic analysis demonstrating that economic instruments are more efficient than command-and-control policies, while favoring the latter over the former. Of course, for this situation to have been the case, the economic literature would have to have been developed prior to the implementation of the policies, with some reasonable amount of time elapsing between the two events in order for the science to trickle down to the public-policy arena. Yet, in examining Dijkstra’s review of the literature, the reader will find that most of the articles cited date from the 1980s, the earliest having been published in 1979. In the United States, the major environmental legislation—the Clean Air Act and the Clean Water Act—was enacted well before the cited literature appeared. Furthermore, the first important environmental legislation enacted after the 1980s, the 1990 Clean Air Act Amendments, did have as its centerpiece a tradable-permits plan for sulfur dioxide. Although Dijkstra notes this fact, he does not note its incongruency with his interpretation. Most recently, discussions have focused on implementation of the Kyoto Protocol and the control of carbon-dioxide emissions. Among true believers in the global-warming hypothesis and in the necessity of reducing carbon-dioxide emissions, the only policies being discussed are carbon taxes and tradable emissions permits.

In short, Dijkstra is attempting to explain a phenomenon that he never convincingly demonstrates has occurred. From his literature review, it appears that once the economic analysis had been firmly established, both public-policy makers and environmental advocates proceeded to heed the economists’ advice. As Duncan Austin of the World Resource Institute has argued, “Surveys show that about 100 economic instruments were in place in 14 OECD countries by 1987, rising to 150 by 1993. In the U.S. they have been used most prominently to control SO2 emissions under the Clean Air Act” (Economic Instruments for Pollution Control and Prevention [World Resources Institute, September 1999], p. 1). What might actually need to be explained is why public-policy makers have been so quick to embrace pollution taxes and tradable permits. My guess is that in an era when socialism is being rejected around the world, these policies have given central planners an economic-efficiency cover for what are essentially market-socialist schemes.

Finally, even as an exercise in public-choice analysis, Dijkstra’s book focuses on only the tip of the iceberg. In the broadest sense, the development of a pollution tax or a tradable-permit plan is a two-stage process. Before deciding on the tax or how to implement the emission permits, a decision must be reached concerning the appropriate target or whether there should even be a target. Such decisions are infused with public-choice considerations and are heavily influenced by the pleadings of special-interest groups. A complete public-choice analysis would recognize that every aspect of the process is politicized and therefore unlikely to give rise to welfare-maximizing decisions. This observation applies as well to the scientific process that determines whether certain emissions are harmful, especially when the research is government funded, as much of it is. For example, with respect to the 1990 Clean Air Act, the real public-choice problems arose not because the appropriate policy instrument could not be determined but because the legislative and executive branches ignored scientific evidence that sulfur-dioxide emissions were not the cause of the problems attributed to them. This process was about politics, about President Bush’s desire to be viewed as the “environmental president,” and not about sound science. Currently, debates over whether or not to ratify the Kyoto Protocol are heavily influenced by governments and alternative-fuel industries that stand to benefit a great deal from the treaty (see Bruce Yandle, “After Kyoto: A Global Scramble for Advantage,” Independent Review 4 [summer 1999]: 19–40). The political machinations may explain why policymakers discussing the issue tend to ignore evidence that enhanced atmospheric carbon dioxide and slightly higher global temperatures may actually have net social benefits. Although he recognizes that rent seeking and special-interest pleading are likely to skew the political process away from efficiency at the level of policy choice, Dijkstra seems to assume that a scientifically well-informed, benevolent despot will make the choice of a preferable pollution target.

Aside from Dijkstra’s making the now-standard observation that because of rent seeking and special-interest pleading, political processes are unlikely to remedy the “market failures” with which they deal, I find very little to recommend his book. Even if one accepts his analysis at face value, there is not much for public-policy makers to do with it. The public-choice problems that Dijkstra points out are endogenous to the process, and he gives no guidance as to how to break out of the box. In this sense, his analysis is somewhat fatalistic. Furthermore, as noted, from a strictly positive perspective, that analysis not only lacks a basic understanding of the literature but may be based on inaccurate empirical assumptions. Finally, the book is very mathematical and will immediately discourage those readers who are not mathematically inclined; hence, it will have very little appeal to noneconomists.

Roy E. Cordato
Campbell University
EconomyEnergy and the EnvironmentEnvironmental Law and RegulationFree Market EconomicsLaw and LibertyProperty Rights, Land Use, and Zoning
Subscribe Buy This Issue Get the App