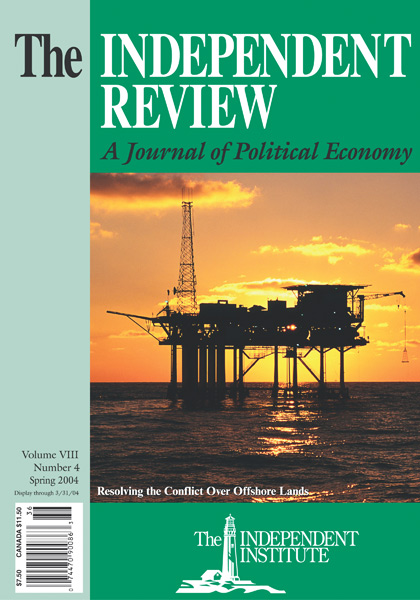 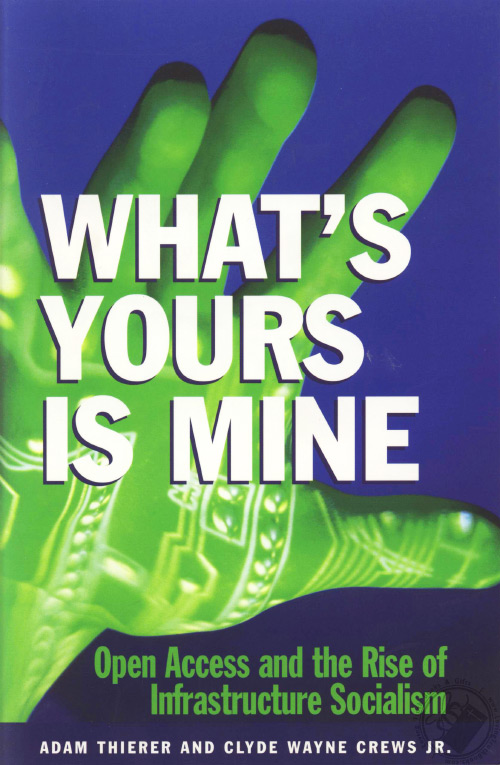 What’s Yours Is Mine
Open Access and the Rise of Infrastructure Socialism
Adam Thierer and Clyde Wayne Crews Jr.
Kindle Paperback
This book review appeared in the Spring 2004 issue of The Independent Review.

What’s Yours Is Mine is a small book that makes one basic point: government-mandated access to “essential facilities” is a bad idea. The authors, Adam Thierer and Clyde Wayne Crews Jr., hammer home their conclusion again and again as they lead us through the major industries where this type of regulation is becoming prevalent. Thierer and Crews perform a terrific service in tying together their theme for various disparate industries and in showing how the fallacious reasoning that underlies this type of regulation manifests itself in different circumstances.

The industries they cover range from telephony and broadband services—the industries where “”must-carry rules are most frequently found—to cable television and computer-operating systems, industries not usually associated with must-carry provisions.

Must-carry provisions require the owners of assets to make those assets—deemed to be unique or too costly or wasteful to duplicate—available to others at a supposedly competitive price. For example, a local telephone company’s facilities have been viewed as a “natural monopoly,” so it is believed that duplication of the infrastructure would be wasteful. As the authors point out, historically this identification has meant that in return for a monopoly grant from the state, telephone companies normally have been regulated in the rates they may charge consumers.

Digital subscriber line (DSL) broadband services require the use of local telephone lines going into homes and businesses. Government regulators would like DSL service to be provided competitively. In an attempt to graft some form of competition onto a regulated monopoly regime, the concept of open access has been created. Various Internet service providers (ISPs) are allowed to use the local phone company’s facilities in order to have “competition” in DSL provision. Obviously, if the ISPs were willing to pay a sufficient price, they might purchase use of the telephone lines. Regulators, however, do not want to let the market work out these issues, fearing that the incumbent will have too great an advantage over newcomers. Thus, under this open-access scenario, the government must also control the prices that the incumbent can charge newcomers. This regulatory removal of typical ownership rights explains the use of the term socialism in the book’s title.

In the first part of the book, the authors provide a brief overview of the underlying logic of the open-access policies. They make an excellent point about the stunted nature of the competition that such regulation engenders. After all, to return to the ISP example, when each ISP has the same cost of distribution and the same technology, how exactly are they going to compete with one another? The very essence of competition has been removed in large part. In its place, we get the flimsiest types of price competition, where at best the margins are kept from rising above a minimum level and even normal returns on investment are threatened. Static forms of competition of this sort are hardly worthy of the name competition. Although the real competition pertains to DSL providers versus cable companies that sell broadband service, the regulators focus on the faux competition that they create with their confiscatory schemes.

In the second part of the book, the authors discuss five case histories: electricity, telephone, broadband, cable television, and software. Their coverage of these topics is far from uniform. Broadband gets the most attention, as befits its status as the best-known case of open access. Telephone gets the second-longest treatment, but far less than the treatment of broadband. The other three case histories are too short to be considered more than superficial examinations of the markets discussed. Nevertheless, these cursory examinations are useful in demonstrating the numerous ways that open-access thinking has worked its way into the regulatory process.

The cable television example is a good case in point because we do not necessarily think of it as raising an open-access issue, although the authors correctly note that it does. Cable television operators are required to carry local television signals whether they want to or not. As Thierer and Crews point out, cable operators want to carry at least some local signals, so market negotiations should have been sufficient to achieve that result without any regulation forcing cable systems to carry all local signals (after all, satellite systems advertise that they now make local broadcast signals available to patrons). One minor oversight on this topic is that in discussing the copyright issues involved, Thierer and Crews do not distinguish between distant broadcast signals, for which there is a compulsory license, and local signals, for which there is no compulsory license. Nevertheless, the market should have been allowed to handle this matter.

Although What’s Yours Is Mine is a useful and important book, certain aspects of it might have been improved. For example, the authors might have given more detailed discussions of the politics involved for each of the case studies. But at least some of the political history is there for some of the cases. No one can fit everything into a book as small as this one.

The book’s major weakness is that it does not present the other side’s arguments very well. This shortcoming makes the authors’ arguments less convincing to open-minded readers than they should be. Inclusion of some extensive analysis of the opposition arguments, using lengthy quotes from the supporters of such regulations, would have been worthwhile. The authors should have dealt with the academic supporters of open-access regulation, who make a case that does not appear to be purely self-serving—unlike, say, AOL, which originally gave strong support to open access, then switched to opposition after it acquired Time-Warner’s cable systems.

What’s Yours Is Mine, its shortcomings notwithstanding, makes a valuable contribution to the literature in the field. I recommend it highly to anyone interested in understanding the dangers of government regulation in the high-technology context.