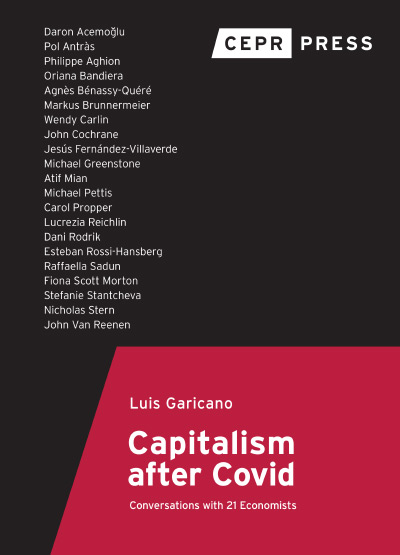 Capitalism after Covid
Conversations with 21 Economists
Edited by Luis Garicano
Kindle
This book review is a web exclusive for the Winter 2021/22 issue of The Independent Review.

The Centre for Economic Policy Research (CEPR) is a network of over 1500 economists based mostly in European universities. Its goals are to “promote world-class research, and to get the policy-relevant results into the hands of key decision-makers” (p. vi). In pursuit of that goal, CEPR launched a new journal, COVID Economics, in March 2020. The journal published 83 issues before ceasing publication in July 2021. CEPR has also published several eBooks related to COVID, including this volume.

What impact has COVID had on the economy and economic thinking? Luis Garicano, the collection’s editor and interviewer, sees a silver-lining as “the pandemic gives us a chance to rethink public policy” (p. 2) and concludes that the “economic policy debate during this crisis was more constructive than in the aftermath of the Global Financial Crisis of 2007 – 08. Whereas in the last crisis economists took sides in the austerity-stimulus battle, this time around economists converged rapidly on ‘whatever it takes’” (p. 1). This begs a profound question, however. Whatever it takes to do what? What is the goal? What are the goals? Whatever it takes to achieve short-term economic prosperity? To stay healthy? To be popular? To maintain freedom? There are trade-offs in the world, after all.

Garicano is a professor of economics at IE Business School in Spain and a member of the European Parliament, where he is the economic spokesman for Renew Europe. He summarizes his outlook in one interview by asking “if you are [a]...politician of our persuasion—liberal, pro-Europe, pro-globalisation—what is the promise you make...right now?” (p. 108). To help answer this somewhat problematic question, he picks the brains of twenty-one elite economists, almost all from Europe, with a few Americans in the mix. Some are very well known, including Daron Acemoglu, Philippe Aghion, John Cochrane, and Nicholas Stern.

The topics of discussion are very expansive, giving a broad-brush picture of these economists’ thinking on a wide range of issues. Even a well-versed reader will learn a considerable amount from the collection and the conversational format evinces a collective mindset of brilliant, well-informed scholars who think they can and must harness government to fix problems. It has to be that way. As Garicano puts it, we live in a “world where the state is destined for a stronger role”—although he admits we “also need stronger, more resilient societies to counter this larger role for the state” (p. 5). Thus, while the pandemic does give us a “chance to rethink public policy,” it appears the thinking goes mainly in one direction. Garicano uses the “L” word—Leviathan. “Solving these problems cannot come at the cost of growing the leviathan of a remote state,” he says. And it’s clear, as some of the interviewees acknowledge, “that governments very rarely cut back in size after they grow to respond to a given emergency” (p. 3). But the reader is misled if he thinks this concern will really be taken seriously except in rare cases.

The collection is organized into sections on “debt sustainability,” “tackling inequality,” “a more balanced globalisation,” “containing the new leviathan,” “promoting innovation and curbing the power of digital giants,” and “combatting global warming.” However, the interviews that putatively consider “containing the new leviathan” generally celebrate the expansion of government. Daron Acemoglu warns against emulating China, whose “success actually came from the competence of its bureaucracy embedded in the authoritarian structure, and not the authoritarianism itself” (p. 94 – 95). (Interviewed in May 2020, he couldn’t have been aware of evidence that this “competent” bureaucracy may have been responsible for engineering “gain-of-function” to the coronavirus and then allowing it to escape from its laboratory and spread around the world.) Acemoglu suggests that we “need to increase the responsibilities of governments because we are dealing with globally complex problems, and the pandemic is not going to be the last one” (p. 95). He admonishes that “in the midst of this pandemic, I have no time for people who argue against tracing apps on the basis that it would be a privacy violation” (p. 95).

Acemoglu outlines four futures—one in which institutions continue to “erode,” emulating China, a rise of corporations “at the expense of the State,” and his preferred outcome of a better social safety net and bureaucratic expertise (p. 95). Consider Acemoglu’s earlier sentence again: “We need to increase the responsibilities of ______.” Acemoglu’s chosen word is “governments.” Unfortunately, he leaves out a fifth option in which individuals learn or relearn to take responsibility for themselves. Instead, Acemoglu concludes that “of course, Hayek was completely wrong,” as the welfare states that grew after World War II did exactly what the population wanted and underpinned “the most glorious period of economic growth in the West” (p. 96). He speaks as though the populations were of one accord and ignores the long-term consequences of the expansion of the welfare state—forgetting that the bill is now coming due in terms of high debt levels and a total fertility rate that’s plummeting well below the replacement rate. But more importantly, even if this is what voters want—a mindset that sanctions taking from others and living one’s life without responsibility—there are no reasonable philosophical or theological arguments that this is what we were made for.

None of the subsequent chapters in the “containing the new leviathan” section really addresses the concern about “containing” it. One includes an encomium by Lucrezia Reichlin that “Europe is the best place in the world. It is the only place in the world where people’s rights are protected and where there is a reasonable welfare state” (p. 110). Not much concern here about a Leviathan that can take away individual rights—and no hint of worries about ill-conceived lockdowns. Speaking of a counterweight to Leviathan, in a later section Philippe Aghion laments that France has “neglected the impact of civil society” and has “infantilised its population, treating them as if they were pupils who were constantly trying to behave badly” (p. 131). Yet, he too sees great hope that the enhanced European state can successfully adopt industrial policies with “sectoral state aid that is implemented smartly and without hurting competition” (p. 128) in an attempt to make European capitalism more competitive with “cutthroat” American capitalism.

Although I have misgivings about the general outlook and goals of many of the interviewees—such as an exhortation by Nicholas Stern that it is “necessary” to ban the sale of internal combustion engine vehicles and the suggestion by Michael Greenstone that we can accurately measure the marginal external cost of carbon emissions today despite having no idea about how technology will evolve in the future—there’s one chapter that works especially well. John Cochrane grieves that Keynesians have won the marketing battle and argues that attention needs to be turned to “getting out of the way on the supply side” (p. 18). He describes Modern Monetary Theory as “the idea that we can borrow as much money as we want, throw it down ratholes if we feel like it, and never have to worry about paying it back” (p. 18). He warns that “the scenario is that we get to 200% debt-to-GDP ratios, don’t really reform our economies, and grow slowly. Then when the next crisis hits, our governments will be unable to roll it all over, and simultaneously borrow more trillions for bailouts and stimulus. Eventually, the bondholders start wanting assets like gold, stock, real estate, Swiss francs. Then the problems start” (p. 20). Then he asks whether in a future crisis “will the U.S. Congress really prioritise paying interest to ‘the rich,’ Wall Street or the central bank of China rather than send stimulus cheques to voters?” (p. 20). In addition, he concludes that there is no longer a real distinction between money and bonds in the economy and therefore standard monetary and fiscal theories have fallen apart, directing interested readers to his forthcoming book, The Fiscal Theory of the Price Level. Many of the other authors/interviewees in the collection also point readers to their important publications, so the volume is a valuable place to begin rather than end.