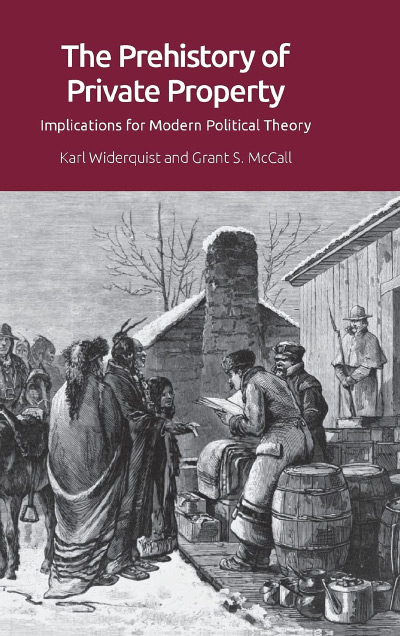 The Prehistory of Private Property
Implications for Modern Political Theory
By Karl Widerquist and Grant S. McCall
Hardcover Paperback
This book review is a web exclusive for the Summer 2022 issue of The Independent Review.

For some reason, Rousseauvian Euro-romantics imagine that we could have all the benefits of a modern economy, with food, medicine, and excellent public transportation, embedded in a society organized by prehistorical norms and folkways. But we can’t have both all that wealth and a small society, because division of labor requires scale. If you want to end private property, you will need to rebalance scale.

That’s pretty much what Thanos, the Avengers movies villain, was after: to restore balance. As Thanos put it in “Avengers: Endgame,”

I thought by eliminating half of life, the other half would thrive, but you have shown me... that’s impossible. As long as there are those that remember what was, there will always be those that are unable to accept what can be. They will resist.

[So] I will shred this universe down to its last atom and then, with the stones you’ve collected for me, create a new one. It is not what is lost but only what has been given . . . a grateful universe.

In the new universe that Widerquist and McCall envision (and it will be a grateful universe, in their minds) all regimes of private property must be shredded, to the last atom. They claim decisively to refute, modestly claiming to have laid all scholarly debate to rest, forever, the “false claims.” The first is that inequality is natural or inevitable; the second is that capitalism is “more consistent” with negative liberty, or limited government, than other systems; and the third is that the normative justifications for property—first appropriation and value of voluntary transfer—actually support a capitalist system.

The authors imagine that having demolished the political philosophy argument for capitalism, the grateful universe will immediately end capitalism. In some way not explained, the new universe to be created will somehow support all the current level of prosperity and material plenty. Just change that one thing—private property—and we’ll all be farting through silk.

The problem is that demolishing the political philosophy argument for desert in private property ignores the actual argument for private property, at least the one that we should take seriously. As has often been argued in the pages of this journal, the argument for capitalism is not a self-contained normative edifice, but is rather an exercise in comparative institutional analysis. Systems with private property have normative problems, it is true. But systems without private property are entirely unworkable, at scale, and have in every historical instance, without exception, collapsed and ruined the lives of those citizens unlucky enough to live under their Thanos-like “man of system” leaders.

I should note that the proviso “at scale” is essential. Because Widerquist and McCall are on perfectly solid, though irrelevant, ground when they point out that small groups of human beings live comfortably and happily by sharing, and having collective norms of resource management, provided that there is not a serious threat of outside conquest. Humans are literally evolved to live in cooperative groups, and the norms of sharing and reciprocal obligation that take the form not of impersonal market transactions but of collective ownership are clearly more “natural” than a decentralized market system using impersonal exchange to organize division of labor.

Of course, many things are natural, including a life span of forty, intestinal parasites, no knowledge of basic medicine, and music that consists of drumming on logs. In the “natural” groups, bound by the Dunbar number where group size can organize collective property through a mental ledger of trust and obligation, the ability to elaborate division of labor is negligible. As Adam Smith argued, division of labor is limited by the size of the cooperation horizon. While cooperation horizons can extend across thousands of people (think Wikipedia), the most effective and robust cooperation horizon is Adam Smith’s “extent of the market” (Wealth of Nations, Book I, Chapter 3).

But as soon as a market begins to expand to an “extent” sufficient to meaningfully elaborate division of labor, the system of common property ownership and norms of equality break down. Humanity faces two choices: implant the Thanos solution and kill most of the people on the planet to restore an ability to live with collective property, or accept that only private property can animate a decentralized, impersonal system capable of delivering food, medicine, and new developments in science from people who do not know us and certainly do not love us.

This argument of Smith, about the need to operate at very large scale to produce “opulence,” has an egalitarian feature at its core. At first, private property is a means of narrowly controlling wealth and valuable “stuff,” as in the silk finery that clothes the king. But a capitalist system quickly encourages division of labor, a system in which increases in dexterity, tool use, and the accretion of specialized knowledge produces, in just a few generations, some version of “the woolen coat.” That means that the very poorest citizens in a capitalist economy are better clothed than the royalty of the previous century. Modern poor people have better cell phones than the wealthiest citizens of 1960, to the point where we take this constant provision of the best products for the least well off for granted.

One might well retort that the wealthy are even better off than the poor, and that difference is widening. I find that people who take this rhetorical tack have never been poor, but simply suffer from envy, perhaps for the reasons Robert Nozick suggested in “Why Do Intellectuals Oppose Capitalism?” (Socratic Puzzles, Cambridge: Harvard University Press, 1997). Intellectuals think they are more valuable than the rest of us, and find it bizarre that they get paid less than owners of used car dealerships. The problem must be private property....

Instead, the problem is that for division of labor to operate at scale, private property and the price mechanism is literally the only available system. (I made this argument at some length at Adam Smith Works, in 2019). We can’t love enough people to be able to support even a decent sized city, much less an entire nation. (Of course, the solution may be the Thanos-like “get rid of most of the people.” I recognize that, but I’m not going to dignify that argument with a response). Ludwig von Mises, in his essay “Private Property,” argued that organizing any society at scale requires private property, and in fact it requires private property with no interference with the price mechanism. Even if you find Mises’ view too extreme, the idea of getting rid of private property but retaining a global population of billions is something close to science fiction.

Let me concede that it would be possible to get rid of private property, and to return human societies to the situation that primitive “prehistoric” bands found themselves in. It was, indeed, highly equal. Everyone was poor, and almost everyone died before they were forty, shivering in bad clothing and eating inadequate—but local!—food. It was always too cold, or too hot, and everyone equally suffered from intestinal parasites and the risk of death from even a small cut or broken bone. Modern romantics of both the left and the right have unrealistic fantasies about “changing the system” to restore human, or family, values. And those are important, in what Hayek called the “microcosm.” But the “macrocosm,” to survive, requires private property, and market systems that elaborate division of labor at scale.

As Hayek showed in The Fatal Conceit, we need both, which means we can’t do without either:

[T]he structures of the extended order are made up not only of individuals but also of many, often overlapping, sub-orders within which old instinctual responses, such as solidarity and altruism, continue to retain some importance by assisting voluntary collaboration, even though they are incapable, by themselves, of creating a basis for the more extended order. Part of our present difficulty is that we must constantly adjust our lives, our thoughts and our emotions, in order to live simultaneously within different kinds of orders according to different rules. If we were to apply the unmodified, uncurbed, rules of the micro-cosmos (i.e., of the small band or troop, or of, say, our families) to the macro-cosmos (our wider civilisation), as our instincts and sentimental yearnings often make us wish to do, we would destroy it. Yet if we were always to apply the rules of the extended order to our more intimate groupings, we would crush them....

So we must learn to live in two sorts of world at once. To apply the name `society' to both, or even to either, is hardly of any use, and can be most misleading....Yet despite the advantages attending our limited ability to live simultaneously within two orders of rules, and to distinguish between them, it is anything but easy to do either. Indeed, our instincts often threaten to topple the whole edifice. (Fatal Conceit, https://www.mises.at/static/literatur/Buch/hayek-the-fatal-conceit.pdf , p. 18)

Michael C. Munger
Duke University
Law and LibertyProperty Rights, Land Use, and ZoningRegulation
Subscribe Buy This Issue Get the App