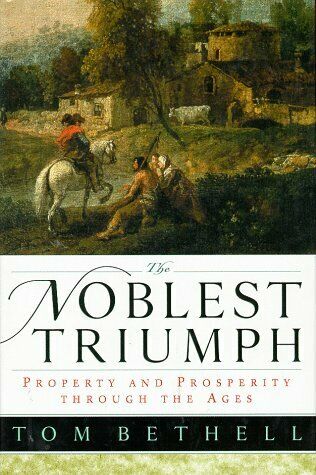 The Noblest Triumph
Property and Prosperity through the Ages
Tom Bethell
Hardcover Paperback
This book review appeared in the Spring 1999 issue of The Independent Review.

Tom Bethell, Washington correspondent for the American Spectator, has written a valuable book for economists and noneconomists alike. The seed of the book was a lecture about economic development that Bethell gave to staff members of the International Monetary Fund and the World Bank, who seemed to him genuinely unaware of the importance of private property and the rule of law. The title traces to Jeremy Bentham, who noted that secure private property rights are “the noblest triumph of humanity over itself.”

Bethell, apparently self-taught in economics, says Milton Friedman’s regular Newsweek column stimulated his interest in economics. He was especially impressed by Friedman’s consistent focus on incentives. The book’s underlying premise is “When property is privatized, and the rule of law is established in such a way that all including the rulers themselves are subject to the same law, economies will prosper and civilization will blossom. Of the different possible configurations of property, only private property can have this desirable effect” (p. 3).

Bethell simultaneously develops two themes. First, he describes in detail many historical cases that show how attenuated property rights have shrunk the economic pie. Second, be traces economists’ thinking about property and law. Many readers will be familiar with the examples. Even so, it is useful to gather them in one volume.

The examples include the Jamestown and Plymouth colonies, Robert Owen’s commune in southern Indiana, the Irish potato famine, the Soviet Union and China, the Arab world, U.S.–inspired land reform in the Third World, zoning, intellectual property, and a multitude of topics under the environmental headingelephants, rain forests, California water, and the U.S. Forest Service, among others. There is also an entertaining allegory about the hazards confronting residents of an apartment-house complex when they “share” the utility bill.

Most interesting to me were the accounts of the Plymouth colony, the Irish potato famine, and the Arab world. I was unaware that prior to sailing for America, the Pilgrims had opposed the communal arrangement that later nearly caused their complete destruction. (I had always assumed that the Pilgrims were naive Christians emulating the early church.) Their position had been compromised by agents who acceded to demands by the colony’s financial backers that output be equally distributed.

Bethell ascribes the Irish potato famine to insecure property rights. Apparently, he caught the scent of the property-rights trail from an 1836 comment of Thomas Malthus on Ireland: “There is indeed a fatal deficiency in one of the greatest sources of prosperity, the perfect security of property.” Malthus, however, did not elaborate. Additional suspicion was aroused by others (John Stuart Mill, for example) who attributed Irish poverty to sloth and shortsightedness. Such behavior, says Bethell, is symptomatic of faulty incentives. For example, the English had perpetrated a series of land confiscations that had undoubtedly shortened landlords’ time horizons. In any event, the important question for Bethell is why Ireland was poor in the first place, for the famine merely pushed it over the edge. Whether Bethell has all the historical details correct I am not sure, but his discussion is an interesting one.

For the Arab world, Bethell notes that “the brutal punishments meted out to thieves suggest that Arab property is prized and protected. The problem is that there is no security against the depredations of the state itself” (p. 225, emphasis added). Land that was once cultivated and productive is now desert. Bethell dismisses the Koran as the source of the difficulty. Instead, he traces the problem to a “freezing” of Islamic law in the fifteenth century. Much of the discussion runs in terms of Europe’s ascendancy relative to the Arab world after 1600.

If a picture is worth a thousand words, it is unfortunate that Bethell did not include an aerial photograph from the November 1987 issue of National Geographic. It shows the border between Haiti and the Dominican Republic, the Haitian side stripped and the Dominican side forested. The difference in property-rights regimes would have made an instructive case study.

With respect to his other theme, economists’ thinking about private property, Bethell argues that Adam Smith, David Ricardo, and Thomas Malthus, among others, understood its importance but took its existence as a given. Bethell tells the story of the profession’s subsequent long descent toward neglect of private property’s importance. So steep was the descent that in the late nineteenth century, Alfred Marshall averred that people could be trained “to feel the public interest as their own.” Likewise, Frank Taussig argued in 1911 that a “higher moral sense” would soon make people more public-spirited. (Why do human perfection and collectivism always seem to go hand in hand?)

At issue here is the nature of human character. Are people innately good? Do their vices trace to the influence of a misguided society, so that surrounding them with “healthy” environments will bring forth the ideal society? Alternatively, are people naturally inclined toward egocentrism? Are vices inborn, forcing us to rely on incentive structures that elicit positive, albeit unintended, social outcomes? In his book A Conflict of Visions, Thomas Sowell argues that these two perspectives on human character (his “unconstrained” and “constrained” visions) lie at the heart of all political controversies.

Curiously, Bethell contends that support for the “innately good” proposition has waned under the weight of the evidence that reliance on it does not work. Perhaps 1999’s counterparts to Marshall and Taussig would not espouse nonsense about people’s identifying with the public interest. Nevertheless, plenty of people act as if they have reached a state of perfection, and they are more than ready to reproduce themselves in us. Try talking to environmentalists.

Bethell locates the property-rights renaissance in the economics profession in the late 1950s and early 1960s at UCLA and Chicago. Armen Alchian and Ronald Coase figure prominently in the discussion. Unlike Smith, Ricardo, and Malthus, however, Alchian and Coase confronted an intellectual milieu that did not accept the importance of property rights. They, along with other property-rights theorists, had to work hard to get their foot in the door, as did their close professional relatives, the public-choice economists.

Monocausal explanations such as Bethell’s are always risky. One question that kept coming to me as I read his case studies was how to account for Sowell’s evidence that certain racial and ethnic groups have consistently outperformed others. For example, what accounts for the success of the Chinese overseas migrants? Property-rights institutions cannot provide the answer. In any event, there is no question that private-property rights and the rule of law are, as Bethell states, the only arrangements that result in high overall living standards and personal freedom. Bethell is to be commended for explaining that fundamentally important idea in a readable and instructive way.