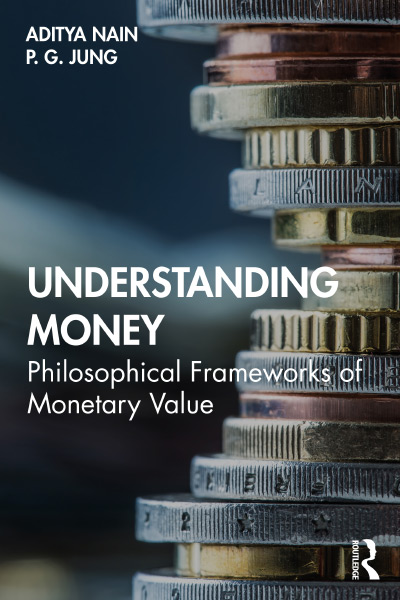 Understanding Money
Philosophical Frameworks of Monetary Value
By Aditya Nain and P.G. Jung
Kindle Hardcover Paperback
This book review is a web exclusive for the Winter 2021/22 issue of The Independent Review.

The intention with this book is to offer theoretical tools for the understanding of what money is; however, not “tools” drawn from economics, but from philosophy. The authors describe how different monetary systems have been analyzed with the help of different economic and philosophical “frameworks” and show the benefits of this broader approach. In the process, those different frameworks attempt to explain how the value of money is determined in different historical circumstances. At the end of the book, the authors offer their own framework, one that would improve our understanding of money beyond what has been achieved so far with the existing frameworks. The practical consequence they aim to achieve with their proposed framework is to conceptualize ontologically new forms of money like crypto and other digital currencies, which is arguably difficult to do with the existing frameworks.

The authors claim that, historically, the discussions about the origin and value of money are divided between the “dominant and traditional” barter narrative and, in contrast to such an “imagination,” the credit or debt theory arguing that the origin of money results from our “disposition of being obliged to” (p.78).

Conceptually, the authors classify the existing frameworks about the value of money as derived from its “substance,” from a “relation,” or from its “function.”

For them, the “substantive” framework, whose origin they attribute to Aristotle, is faulty because it cannot explain the difference between the “intrinsic” use-value of the monetary merchandise and its exchange-value (pp. 27–31).

Examples of frameworks claiming an objective value to money are not only commodity but also labor theories of money.

The “relational” framework, they attribute to Michael Innes and his “credit theory of money” (p.71).

The “functional” framework is how they understand Georg Simmel’s contribution to the philosophy of money in the central and most compelling chapter in the book (pp. 78–86).

They end the book proposing their “constructivist” framework. In their words, their:

formal framework, in a sort of neo-Aristotelian manner, approached monetary value from a multi-categorical perspective, within which the categories of substance, relation, and function all come to be considered as equally essential categories in an adequate description of various empirical manifestations of monetary value, or what is the same thing, a monetary system; such as the contemporary bank-based system, the gold-standard system or Bitcoin (p. 123).

Let me start my analysis of the book by its bibliographical references and index. In the bibliographical references, there is no mention of the works of Friedrich Hayek, Ludwig von Mises, Milton Friedman, or John Maynard Keynes. Carl Menger (2009, The Origins of Money, Alabama: Ludwig von Mises Institute) and myself (2016, The Ontology and Function of Money, London: Lexington Books) are mentioned in the references but not in the book. Apparently, the authors limited their sources of the existing literature to David Graeber, Nigel Dodd, Felix Martin, and Ole Bjerg.

In the index, there are no entries for “subjective” or “intersubjective” value, for “metallism,” or “market.” Worse, there is no discussion about these concepts in the book.

Even in the chapter about Simmel, in which the authors correctly describe Simmel’s attempt to overcome the problems of objective conceptions of value, and in which they mention the limitations of considering value as merely subjective, they fail to bring what was Simmel’s proposed solution for that problem, that is, the concept of intersubjective value, in spite of the fact that they quote him in a footnote as saying that much (p. 95).

Mind you, they realize that value, for Simmel, is discovered by a process of interpersonal relations (p. 85). However, they fail to either see or mention that, according to Simmel, that is the market price of money and that the “epistemic framework,” which allows the intersubjective value to be revealed, is just the price mechanism in the market, as simple as that.

There are plenty of passages in the book in which the authors call attention to the limitations of objective theories about the value of money. That seems to me to be beating a dead horse, though. I think that intrinsic conceptions of money value, such as metallism or the labor theory of value, were debunked long ago. There’s no need to write a new book about that, unless the return of Marxist economics to the academia is worse than I imagine possible. In that case, of course, their book would be a good addition to help debunk the labor theory of value again.

Their argument about the limitations of the credit theory of money (based on the concept of “relation”) to explain the value of money outside the historical context of a bank-centered monetary system—because of its dependence on “substance-instantiations” on things like coins (p. 111)—is a welcomed one, though.

Regarding the “functional” paradigm as proposed by Simmel, they see it as insufficient, because allegedly:

despite Simmel’s non-substantive intervention in the philosophy of monetary value, his eventual drift toward object-centrism renders his framework inadequate in a world increasingly populated by purely digital and, importantly, seemingly limitless money (p. 94).

That is why they see the need of a new paradigm. However, I beg to disagree with that. One of the most important of Simmel’s insights is that money evolves (2001, The Philosophy of Money, New York: Routledge). Not only that, but money evolves towards forms of increased abstraction, until we will reach “the greatest triumph in money,” that is, when it becomes purely abstract (p. 129). So, the functional framework proposed by Simmel, although it was conceived at a time that money was embodied in coins and banknotes, is sufficient to help us to understand what money is, even if money has evolved to more abstract forms than the ones in existence at his time.

In the closing chapter of the book, the authors offer their definition of money, claiming that:

the three necessary and sufficient conditions for something to be defined as money or as manifesting monetary value could be reformulated as: (i) it should be an abstract quantitative unit of value, (ii) that is transferable, and (iii) that this transfer, in terms of its positionality, must be traceable and translatable into a system of accounts (p. 131).

We can see from their definition that the authors have not considered how something becomes a unit of value (because that something is what you prefer to receive in exchange for your merchandise, the GAMOE, perhaps). They do not explain why they think that it needs to be abstract (it does not, as countless forms of primitive and commodity money attest). It is implicit in their condition that the money thing should be “transferable,” that it is “exchangeable”; but there are things that are more exchangeable than others, and not all of them are money. By the way, the authors not only fail to mention the feature of greatest salableness as an essential characteristic of money, but they also fail to mention that given the spectrum of salableness possessed by different instruments, it is really better to ascribe varied degrees of “moneyness” to different things. That is, it is more accurate to consider money less as a noun than as an adjective. Finally, although they say that it needs to be “traceable,” that evidently is not the case of transactions with cash, something that no one would deny is money.

In spite of the lack of engagement with a significant part of the literature on the philosophy of money and the key concepts used in the discussions carried by the different authors on this subject, I consider their book as an integral part of the project of better understanding monetary arrangements. Its contribution seems to me a valuable one, one which deserves to be considered, addressed, and incorporated in the discussion on this topic from now on.